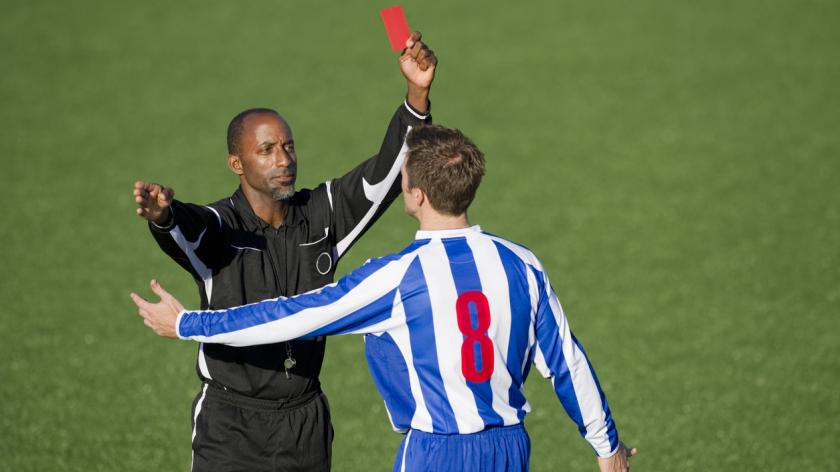 by
Alan Sharland
When failures occur in a business environment, it’s easy to point the finger, but the key to cultivating an effective team dynamic is creating an environment where all are accountable and no one is to ‘blame’.
5th Sep 2019

A striker is through on goal in a football match and takes a shot. The goalkeeper seems to catch the ball at first, but they drop it and it goes past them into the net. It’s a winning goal for the other side in the dying seconds of the match.

Whose fault is it that the game was lost?

Fans and commentators will often default to blaming the goalkeeper.

Interviewers speaking with the manager and other team members afterwards will highlight that moment as crucial in the game and perhaps more openly suggest, ‘the goalie lost it for you’ – but the team would disagree!

A successful team would dismiss such suggestions on camera, in the dressing room and on the training pitch in the days afterwards. Why? They use a no-blame approach to such situations.

The team does not blame the goalkeeper for the loss of the match because they are all accountable for the events that led to the opposition player having the ball in the moment of scoring.

Accountability: the obligation of an individual or organisation to account for its activities, accept responsibility for them, and to disclose the results in a transparent manner.

A combination of outfield passes failing to reach the intended team-mate, a free-kick being given away through a foul, a defender not doing a strong enough tackle to get the ball back, and other activities will all have contributed to the opposing player having the ball in front of the goal at the time they did.

They were able to score as a consequence of both the preceding events and the goalkeeper dropping the shot.

In blame-focused approaches, we will often hear the phrase ‘they need to be held to account’ about the person at the end point of the negative event or mistake occurring.

This leads to a case of ‘selective accountability’ where only one person’s activities are scrutinised.

A ‘no-blame’ approach maximises accountability because all contributions to the event occurring are identified and reviewed for possible change and improvement.

This means the focus remains on what happened and not who did it. ‘It’ (whatever that may be) occurred as a consequence of the actions of the whole team.

An effective and continually improving team recognises that to make such situations less likely in future all members will have to look at improving aspects of their game to prevent opposition players getting through to the goal in future, and the goalkeeper will have to practise and improve their ball stopping capability.

A shared focus on improvement without threat of being ‘singled out’ for criticism exists, and past fallibilities are perhaps even teased and treated with humour.

When applied in any team situation, sporting or otherwise, a no-blame approach means there is full accountability for a situation such as project failure, team underperformance, or bullying allegations - and not a focus on the actions of just one person.

The mood and morale of any team that uses a blame approach will be low and the working environment will be one of despondency, stagnation, silences and stand-up rows.

The mantra ‘all are accountable, no one is to blame’ is reflected in the processes that follow.

All members acknowledge, self-review and openly discuss their contribution and all are in the same position with regard to accountability.

Additionally, when a future match is won, the success is also not attributed to an individual.

All are accountable, no one is the ‘star’.

What would the scenario look like in a blame culture?

When the goalkeeper is blamed for the loss of the match they are likely to direct an accusatory finger back at others.

‘Why did the striker lose the ball? Why did the midfielder not cut out the pass to the opponent player who passed it to their striker? Why didn’t the defender tackle the striker to stop them shooting? All of them are just as much to blame as me! Why are you picking on me?’

As the blame-battle commences, some will enter the fray while others sit on the side saying ‘it wasn’t anything to do with me, I didn’t touch the ball’, a statement that seeks to deflect the possibility of blame but overlooks that their very presence on the pitch has an impact on what happens.

The point about a no-blame approach is it supports and expects self-responsibility and accountability by all, whatever the role of the team member.

On the training ground in the following days, none will be inclined to work on their contribution to the loss because to do so would be to acknowledge they also played a part in the goal and so they risk being singled out for blame instead of the goalkeeper.

There will be a general reluctance to acknowledge responsibility for any actions that may have contributed to the loss of the ball to the opponent striker and so the opportunity for improvement will be lost.

The mood and morale of any team that uses a blame approach will be low and the working environment will be one of despondency, stagnation, silences and stand-up rows.

No one is accountable – all are to blame for this situation arising.

‘No, it’s management’s fault a no-blame approach doesn’t happen’ some might say, not recognising the self-contradiction in their statement.

The point about a no-blame approach is it supports and expects self-responsibility and accountability by all, whatever the role of the team member.

Sometimes the idea of introducing a no-blame organisational culture can suggest it is intended to replace a blame approach and understandable resistance to its introduction follows.

There are valid concerns that serious transgressions will not be acknowledged and that procedural, sometimes even legally required sanctions for the transgressor will not be applied.

If a player on the football pitch punches another player there is an immediate ‘blame-approach’ taken and the player is red-carded and sent off.

Their actions have breached clear pre-defined expectations and their personal accountability includes the action that is a breach of the law.

Pre-defined consequences will follow so that other participants in the activity are protected from continued risk of harm.

A no-blame culture has to show up in the daily language and practices of all employees over time.

Additionally, if the player who was punched was also seen to have committed a breach of the rules, perhaps by spitting at the other player, they too will be sent off.

This applies whether a team adopts a no-blame approach to its performance development or not.

A blame approach is appropriate and necessary as a response to issues such as harassment, professional negligence, gross misconduct and violence. All are dealt with through an investigatory procedure to explore whether evidence exists to support the blame and subsequent punishment or sanction of an individual or group responsible.

Legal duties towards anyone affected will quite rightly require this.

In such situations, ‘who did it?’ is the more appropriate question. What happened is already clear if evidence exists that an action breaches pre-defined regulations and blame needs to be established.

In a lot of difficult situations in workplaces there is an ambiguity with regard to ‘who’ is responsible for a detrimental event occurring.

I include bullying allegations, perhaps controversially, because unlike a clearly definable action such as harassment, bullying is so broadly and subjectively defined, and events interpreted, that investigations rarely, if ever, reach a conclusion that is distinct enough to allocate blame.

You will be a rare reader if you have witnessed an investigation into allegations of bullying that came to a decisive conclusion with no lingering appeals afterwards.

In this situation particularly, it is appropriate to provide access to both a blame approach (investigation, grievance procedure) and a no-blame approach (mediation, conflict coaching for example) so that if no evidence of harassment or violence or other gross misconduct is proven amongst the actions alleged to be bullying, there remains the option for a no-blame process to be used at any time during the life of the complaint, not just at the start, or, in desperation, at the end before a costly and still inconclusive tribunal.

Creating a no-blame culture – how to get started

For any organisation to create a no-blame work culture in its response to difficult situations it needs to do the following:

1. Provide clarity across the workforce

Be clear about situations which are/are not appropriate for a no-blame approach and ensure all staff understand the distinction.

If this is not done, the default will be to use a blame approach even in situations where it is inappropriate and ineffective, as staff will understandably want to ‘cover their backs’ – a common phrase, and necessary action in any blame culture.

Be clear about the effectiveness and productivity benefits of using a no-blame approach where appropriate, including considerations of staff motivation, retention, creativity and productivity as well as organisational change. If you’re not convinced by the argument, don’t use it.

Learn and continually develop what actually constitutes a no-blame approach in terms of language used, questions asked, and the purposes of processes.

It will be a waste of time and resources to simply add a ‘no-blame’ path on a flow chart and expect staff to implement it.

There are significant fears that staff at all levels have about the idea of a ‘no-blame culture’ and ignoring them is in contradiction to the whole point of the approach.

A no-blame culture has to show up in the daily language and practices of all employees over time.

To become a culture, the approach has to be introduced, continually reflected on and improved, as appropriate for any experiential learning process of which a no-blame approach is an example.

To try to implement it in any other way would be self-defeating and self-contradictory – and a waste of resources.

Arguments for a no-blame approach can focus on the more ‘human’ benefits of working in such an environment, but the benefits also have to support productivity and bottom line expectations for any organisation.

I hope this article has conveyed why that outcome is just as likely.

Now, let’s get back out on the training pitch!

Interested in this topic? Explore more articles on culture in our company culture hub.