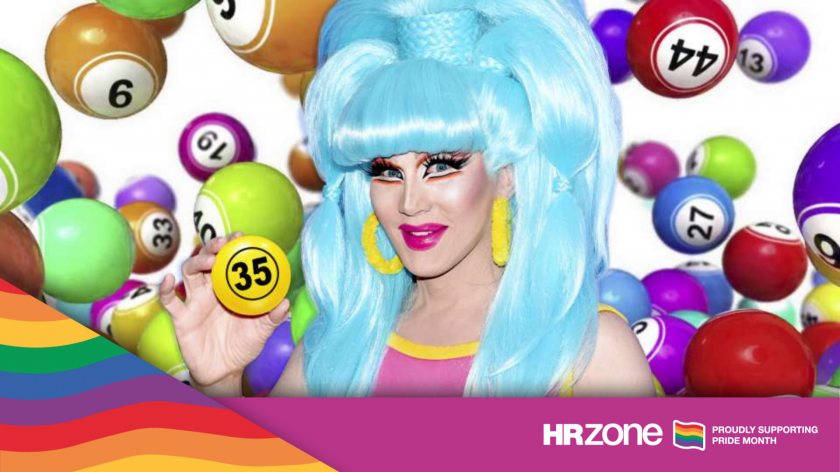 Pride Month: how HR professionals can better support the LGBTQ+ and drag community

The success of RuPaul’s Drag Race has brought drag into the mainstream, but many LGBTQ+ employees (including some of our favourite drag artists) have struggled at work. This Pride Month, we look at some of the steps HR teams can take to help alleviate this pressure and create a more inclusive workplace for all.

Drag has been a part of British culture for centuries but the last few years have seen a surge in its popularity, with drag bingo, brunches and conventions popping up across the country. The latest series of RuPaul’s Drag Race UK, which aired on BBC Three in January this year, was watched by more than 12 million people, and the show has been credited with bringing drag into the mainstream like never before. One conversation got the public – and HR managers in particular – talking about it in a new way, however.

Change doesn’t happen overnight and it’s not just in Pride Month that we need to focus on it.

Part way through its run, the latest series of Drag Race UK was put on hold, as the Covid-19 pandemic gripped the world. Contestants were forced to go home and, with all performances cancelled, they struggled to make ends meet. Contestant Ellie Diamond explained how they kept their employment contract with McDonalds open, working at a drive-thru restaurant between jobs. “If the worst comes to the worst and the money is not coming in, I’d need to go back to the drive-thru. The time I spent there was amazing. I made friends and it definitely helped get me through the pandemic…I’m thankful for it,” they said at the time.

Eventual winner Lawrence Chaney had a less positive experience, telling fellow contestants, “for so long I was bullied and told I’d never succeed…people put you down completely”.

Since then, Lawrence, Ellie and the other contestants have become household names, but it did cause many to question how many other LGBTQ+ performers were struggling to maintain two jobs and potentially facing discrimination along the way. With this in mind, how can HR teams ensure that LGBTQ+ employees – including drag performers – are fairly treated and that their organisation’s culture is as inclusive as possible?

‘Bringing your whole self to work’ is a phrase we’ve heard bandied about a lot in diversity and inclusion discourse, but what if your ‘whole self’ is a drag queen? How does that translate in a work context?

Alyssa Van Delle is a professional international drag performer and host of popular events such as Drag Queen Story Time. “Before I became a full-time drag artist, I was working in hospitality, often finding zero hours contract positions that allowed me to work flexibly around my drag performances. I was incredibly lucky in always having very understanding managers.

“I organise big shows and do all my own costumery and joke writing etc. so I often found myself having to push out thoughts of drag work from my mind when I had to be full ‘muggle-work mode’, as I refer to it. Switching between mindsets was interesting, and tough at the time”.

“The problem with bringing your ‘whole self’ to work when you’re a drag queen is that you probably did a gig at 3 ‘o’ clock in the morning the night before,” jokes George Nicholls, a.k.a Orange Gina, founder of Queer the Norm, a queer-led social enterprise that hosts drag entertainment under its That’s Drag brand.

“Trying to do this drag artistry while holding down a full time job is a really hard thing to manage,” explains Nicholls. “I was very lucky everyone I worked with was very supportive of working with someone who is a drag queen, it was a very positive experience – until it wasn’t. I was dismissed and ended up leaving the business without the support of people that I thought I’d had”.

This negative experience turned into an opportunity, however, as Nicholls’ business took off. “We’ve been hosting shows for the last five years but over lockdown, we positioned ourselves as a corporate ‘edutainment’ provider, doing shows for large organisations like L’Oreal, Kellogs, and Warner Music”.

As more companies have focused on employee wellbeing during successive lockdowns, online entertainment such as drag shows and bingo have seen a boom. “Zoom conversations can be so awkward, especially if you’re trying to run a company social online and it’s not facilitated. There can be weird silences and people feel ill at ease. We alleviate all of that,” explains Nicholls.

“Our framework is bingo, so it’s a game everyone can play, but we can overlay any theme onto that, so we’ve done health and wellness bingo, Pride bingo – it’s educational as well as being fun,” they added.

One entertainer who has found increased success through medium is international drag artist and Drag Race US series nine contestant Charlie Hides. “Within hours of the first lockdown, I had created an online show that quickly became the number one Zoom bingo in the world,” says Hides.

“My very presence at a corporate event is an in your face to drab conservatism. Companies are increasingly asking their teams to ‘think outside the box’ and I just can't be put in a box. Often, companies that hire me are telling their LGBTQ team, ‘we value you and want to do something special for you’.  I'm always impressed by the sheer number of allies that show up to support their co-workers and join in the fun”.

Such is the current demand for drag performers, that City Academy, a creative and performing arts academy based in London, has launched an online drag course, Drag Up!, to train the next generation of performers. Course leader Camille Toe – who is also a screen and theatre director by profession – is hopeful that it will nurture new skills and a sense of community among students. “Drag builds confidence, it’s an armour. You can talk the birds out of the trees and command a room. The skills required for drag are easily transferable. If you need to boost sales, or need a team leader, an ideas person, someone to solve problems – the list is endless – drag performers have all that”.

Ultimately, drag is a form of escapism, suggests Charlie Hides. “Joan Rivers once said, ‘a good laugh is like taking a holiday’. That’s what we’re here to provide as performers. We’re a mini break for your soul!” Given the year we’ve all had, perhaps more of us could benefit from that.

Change doesn’t happen overnight and it’s not just in Pride Month that we need to focus on it. If you’re serious about creating a more inclusive culture, here’s some advice:

1. Be explicit with your support

True diversity and inclusion can’t simply be mandated in your company policy. HR leaders have to be active and visible in their support. “The first step is getting a HR manager who doesn’t pull that face like someone’s punched a quiche when a person says they are LGBTQ+! That would be a good start,” says Camille Toe. HR managers must not shy away from bold and inclusive conversations if they are to ensure everyone feels like they belong.

Employees should feel safe to speak up. “HR professionals should ensure that employees are aware of any policy/practice around bullying/harassment and that they are encouraged to report any abusive behaviour. This relates to any potential abusive behaviour arising from co-workers who learn about the artists’ work,” said a spokesperson for Equity, the trade union for actors, performers and other creative professionals including drag artists.

Are your pay and reward policies genuinely fair? Recent studies suggest LGBTQ+ employees take home an average of £6,703 less per year than straight colleagues. “Every company should be actively ensuring that LGBTQ+ employees are being fairly treated at work,” says Charlie Hides. “Unfortunately the statistics are not encouraging. The pay gap between heterosexual cis males and LGBTQ+ people stands at around 16%. This must be addressed. HR directors need to pay attention”.

As with any employee who has commitments outside of work, flexibility is key. “We would encourage HR professionals to ask about working patterns (e.g. most artists work at the weekend) and whether any flexibility is needed,” said a spokesperson for Equity.

“It’s good to be actively engaged but with some of these issues you can’t enforce blanket rules on everyone,” explains George Nicholls (a.k.a Orange Gina). “One good example is the drive to put your pronouns on your email signature or Zoom. Employers shouldn’t be enforcing that because, for example, if you’re a transgender person but you’re not out at work and presenting as male, you may feel you have to put ‘he/him’ on your email because everyone is doing it. If you’re forced to do that, you’re misgendering yourself and this can create an uncomfortable experience. It’s fine to encourage people to add their pronouns but you can never enforce a rule like that because it can actually do harm to the trans community itself”.

While it’s a positive sign that HR teams want to get LGBTQ+ employees involved in promoting diversity across the organisation, it has to be done sensitively, argues Nicholls. “Asking people to exhaust their own emotional labour for the sake of your company is unfair. Some people don’t want to talk about their personal lives at work, they don’t want to be that ‘face of the company’, they might be shy or introverts, they will never want to be part of a group like that and they shouldn’t have to be. I think the way to position it is making it fun. If it feels like work, people will soon be disillusioned and feel they should be paid for that kind of thing”. Employing LGBTQ+ entertainers for company events and hosting queer-friendly socials are one way to help bring people together and promote inclusion in a non-threatening way.

Interested in this topic? Read The ‘rainbow ceiling’: why LGBTQ+ employees feel held back at work.