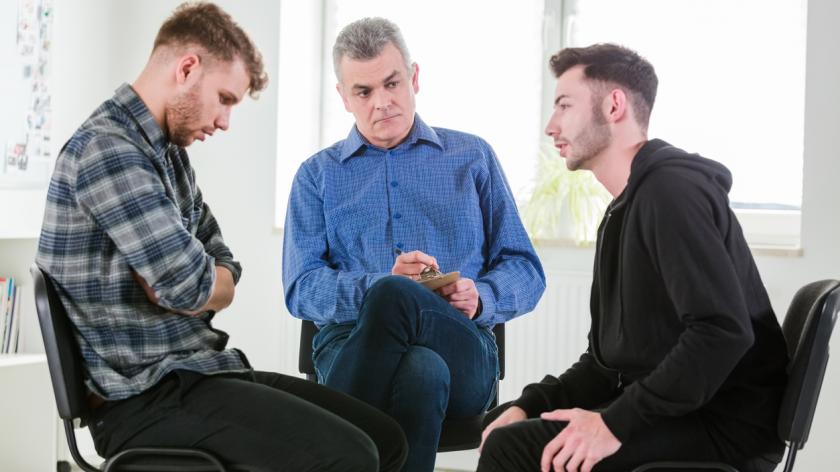 If we truly want to achieve workplace gender equality, we need to give men the space to express vulnerability and talk about their mental health.

Gender bias works both ways; if we really want to make the workplace a psychologically safe place for all, we need to start giving men the opportunity to explore their feelings.

‘Calling out the men’ was the catchy slogan that attracted my attention at the Mad World Summit in London last October. It belonged to Rising Vibe, a learning, development and change consultancy that wants to equalise the mental health conversation.

A greater understanding of the differences between male and female wellbeing can help both genders unite in the modern workplace.

Its founder Lou Banks said, “men struggle more than women to talk about how they feel and it’s having a huge impact on business performance”.

I was intrigued because Lou is a woman. A woman on stage sticking up for men. She challenged the unhelpful label of toxic masculinity, saying many women, including herself, have displayed the same negative behaviours in the workplace.

It is men, however, who are framed as aggressive, forceful, dominating, defensive and superior. While this can be true, our collective efforts should challenge individuals, cliques and cultures rather than the male demographic.

Lou referenced how a Google search for ‘support for men in business’ returns female-oriented results, such as ‘what men can do to support women in the workplace’. Maybe Lou’s belief that “people are now scared to talk about men’s mental health at work” influences the gender neutrality of algorithms and content creators, or maybe not enough work is being done to provide emotional support for men.

Success for Rising Vibe is not focused on the search engine optimisation for men’s mental health. Lou has got right to the heart of the stigma to understand what is driving men’s low vibe emotions at work: struggling to explain how they feel, needing permission to be vulnerable and ask for help, and a lack of emotionally intelligent male role models to help break the outdated stereotype of the strong, silent type.

The ethos of the ‘calling out the men’ campaign is ‘when men feel better, they do better’. Empowering men to talk about their low vibes is the first step, but action must follow if they are to develop the confidence to choose the thoughts and behaviours that allow them to stay in control and thrive with high vibes: confident, respectful open while being decisive, assertive and resilient.

This fresh perspective on overcoming misconceptions of male identity can help men reinvent themselves for the post #MeToo workplace, with modern masculinity complementing rather than disempowering feminism to achieve a gender balance. Men being kind and caring does not mean they are soft, while women being assertive and speaking up does not mean they are ruthless bullies.

The unconscious gender bias that exists in organisations is complex and entrenched. Like mental health, it has to be managed rather than cured. A greater understanding of the differences between male and female wellbeing can help both genders unite in the modern workplace. This push for two-way empathy between both sexes may be affected by men reportedly being unsure of how to engage with women in the modern workplace because they fear of being accused of discrimination or sexual harassment.

While it is important to reflect on news stories and survey findings to understand workplace and cultural barriers, organisations should focus on the headlines in their organisations to gauge if taboo topics are affecting how people communicate, engage and respect one another.

Men struggle to speak out or express vulnerability because of the perception of male power in the workplace. They feel they don’t have the right to ask for help because they feel fortunate to have a job and be relatively successful, and not face the same challenges as women...

Both sexes may shrug their shoulders, say they have no gender disputes and want equality. It only takes one perceived injustice or workplace dispute, however, for people to be in conflict with their unconscious bias as they search for a reason to explain what happened, how they are feeling and what to do about it.

For example, a man openly disagrees with a female colleague and she indicates this is due to her gender, while the man believes he is saying it because he does not like her idea. Or an older white man is unhappy when he hears the ‘pale, stale and male label’ being used in the office, but can’t say anything because he knows diversity is important and beneficial to the organisation and wider society; he just doesn’t want to hear it from a female colleague or younger man as it leaves him feeling under threat and vulnerable. It’s good to talk about these fears, but it’s easier to internalise and say nothing.

Lou Banks said, “men struggle to speak out or express vulnerability because of the perception of male power in the workplace. They feel they don’t have the right to ask for help because they feel fortunate to have a job and be relatively successful, and not face the same challenges as women, such as a greater risk of discrimination and sexual harassment, and prioritising family over career progression, but are conflicted with the shame around not feeling good.

“Talking is great, but then what? For wellbeing to thrive in business people need to feel safe. To create that safety, you need a culture of trust. Leaders need to recognise the importance of role modelling to drive this cultural change by going first and demonstrating to their employees it is safe to be vulnerable.

“We need to provide tools and the language in the workplace that resonate with the way men talk, think and function and use emotion to challenge low vibe behaviour with compassion and care, creating safe spaces in which men have the permission they need to talk, own and ultimately change how they feel”.

I grew up in the nineties and early noughties, the offspring of parents who met in the workplace. I was surrounded by the Oasis swagger, Goodfellas posters, Lock Stock wannabes, pub crawls, endless football debates, the creeping death of round-the-table conquests, girl power, the rise of the ladettes and tough guys in over-priced shell jackets shouting, “you know who I am?” outside kebab shops in suburban high streets.

It was educational and made me the man I used to be. I have matured, become career-driven, emotionally intelligent and have a shared responsibility with my male peers to make the workplace a safe and inclusive environment where everyone feels respected and can thrive.

Let’s work together to understand what caused men’s predicament and what can be done to accentuate our qualities, improve our wellbeing and earn our commitment to understanding and achieving gender equality.

We may not find our partners at work any more, but hopefully everyone can find acceptance.

*Disclaimer: The content of this blog is entirely my opinion and does not reflect the opinions of any organisations I am affiliated with.