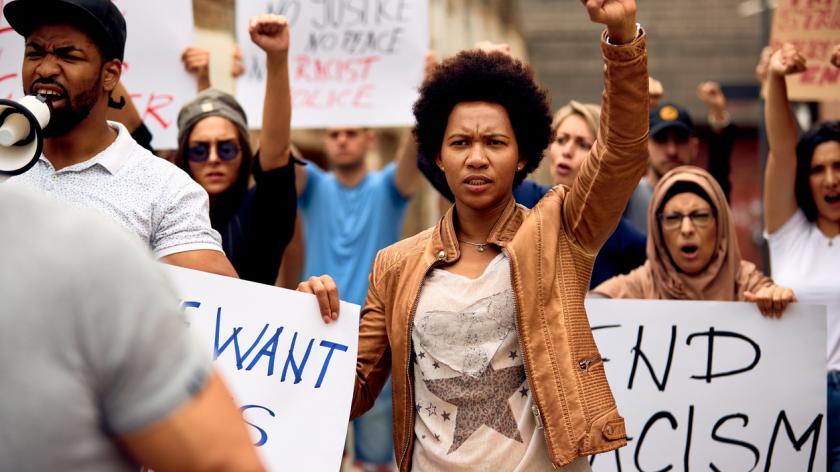 Black Lives Matter: make sure your business is a race ally

In recent months many companies have publicly voiced their support for the Black Lives Matter movement, whilst simultaneously ignoring systemic biases within their own organisation’s culture that prevent diversity. It’s time for everyone to ‘be the change’ they want to see and take action.

When we work with management and leadership teams from companies around the world, we often ask them to do the following exercise: write down the names of your five closest friends, your five closest colleagues, your partner or partners (or the person you’d like to be your partner), and a few neighbours. We have participants draw a circle around that list of names and explain that this is their in-group. These are the people they trust the most, that they go to for advice, those whom they choose to spend their time with.

We then ask them to consider just how diverse that group is. Often, any individual’s in-group is diverse on some characteristic or other – sometimes it’s gender-balanced, or socio-economically diverse, or heterogeneous in some other way. It’s often also very homogenous in most ways, however, such as disability, race, or political view.

Companies need to do more than just issue statements. They need to act.

This is a natural tendency. Research in social psychology suggests that, at a very primal level, our default position is to congregate into groups that afford us safety. Our natural reaction is also to reject the unfamiliar, in a ‘flight or fight’ unconscious response. Furthermore, the academic literature explains that humans identify with groups of their own kind and will make attempts to fit into these groups to secure their social status. So it makes sense that our in-groups are mostly people like us.

One of the ways in which our in-groups tend to be most similar is around race. A poll conducted by Reuters showed that 40% of white people in the US don’t have a single non-white friend (for other racial groups, 25% don’t have friends of other races). Even when looking more broadly at our acquaintances – including coworkers, friends, and extended family – the study showed that still 30% of white people don’t mix with other racial groups, and 80% have fewer than five non-white friends.

What happens when we don’t have racial diversity?

With the advent of new technologies like machine learning and AI, it has become increasingly easy to build a homogenous bubble for ourselves. We are mostly able to choose who we interact with, and we’re also able to intensely curate – consciously or subconsciously – the content we receive online. Again, this is natural – that curation happens because that content is what we’re most likely to engage with. The truth is, we like – on a very primal level – that homogeneity.

The trouble is that if we aren’t surrounded by difference, our ideas become increasingly reinforced by similar people around us. We might not be willing to even entertain the idea that those with different opinions might have a point or that their point of view could be valid. What’s worse, we begin to attribute our hatred for those ideas to the people who espouse them, and so we don’t just dismiss the ideas, but the people themselves. We don’t even know we’re doing this to ourselves. So whilst segregation may be a natural phenomenon, it can be compounded and accelerated by unchecked human actions.

This is how biases form, and it happens both at an individual level as well as at organisational and societal levels – when we’ve never seen black leaders in our company, we get used to that norm and it becomes increasingly difficult to break from that norm subconsciously.

What can we do about it?

Given the current moment – when the extrajudicial police killings of unarmed black people like George Floyd, Breonna Taylor, and others are making the news and inspiring mass protests for Black Lives Matter around the world – companies across all sectors have been making public statements in support of racial equality. We’re also seeing backlash to this, however with many pointing out these companies’ hypocrisy; they issue public statements, but they don’t take any real action to better the situation.

Starbucks famously closed down all their stores for implicit bias training for a day after a racist incident in Philadelphia, but now they have banned their staff from wearing anything in support of Black Lives Matter (despite the fact that they are encouraged to wear clothing/accessories in support of Pride). L’Oreal tweeted their support for Black Lives Matter, but as one of their models pointed out, they have fired people in the past for vocally supporting that same movement.

Companies need to do more than just issue statements. They need to act.  Here are three things organisations can do to really go beyond empty words:

At the end of the day, inclusion is a process and it’s built on behaviours. If we don’t act inclusively, we won’t build a culture that reflects the values so many companies espouse in public. If we truly want to mend the racial rifts of our past, we need to take action. Let’s get to work.

Interested in this topic? Read Diversity and inclusion: Waking up to your privilege to help tackle unconscious bias.