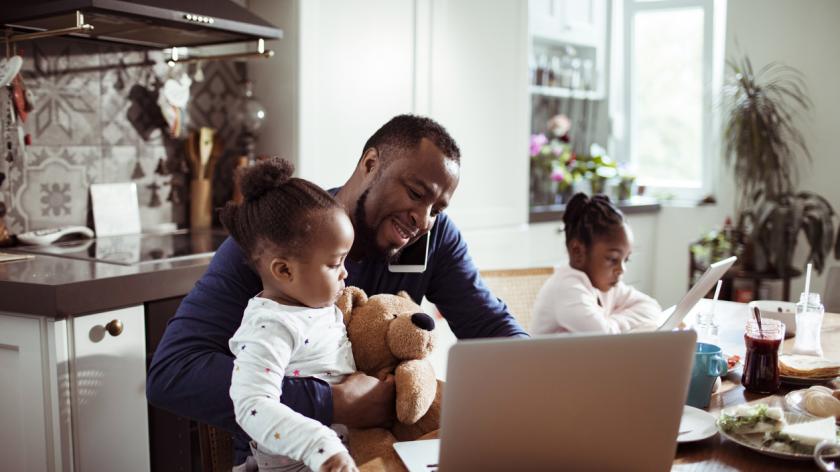 Working parents: why supporting new dads in the workplace is key to gender equality

The cultural norms around work are changing at a rapid rate thanks to the pandemic, but we must not allow it to widen the gender gap at work. A key part of this is creating the right conditions for working dads to take on their share of the caring responsibilities.

Gender equality took a big hit in 2020. At the start of the pandemic, the government suspended enforcement of gender pay gap reporting. Domestically, women took on more unpaid labour and despite evidence that the first Covid-19 lockdown led to a 58% increase in childcare undertaken by men, the equality gap widened and more recently those gains appear to have rolled back. Facebook groups such as The Career Mum are full of stories from working mums taking on a disproportionate share of unpaid domestic labour, whether it’s childcare, home school support or the mental load.

Supporting new dads is about reframing the conversations around parenting in the workplace.

Meanwhile, gender stereotyping is alive and well in the corridors of power, with the UK government being forced to withdraw a poster that depicted only women engaged in domestic tasks, including standing with a mop bucket (and) home schooling children. We’ve also seen recent legal action in defence of maternity rights. Pregnant Then Screwed have started legal action against the chancellor for allegedly discriminating against an estimated 70,000 women whose maternity leave isn’t exempted from the Self-Employment Income Support Scheme (SEISS) calculations, effectively treating maternity leave as a sabbatical.

With all of this in mind, why am I championing support for dads in particular? Well, they’re a key part of the puzzle. In a society that increasingly recognises that men want to be more actively involved dads than ever before, new dads represent a significant opportunity to create allies and provides us with a chance to reframe workplace and societal norms around breadwinning and caring, thereby improving opportunity of choice for men and women alike. Here are three reasons why it’s time to talk about supporting new dads.

Dads represent an enormous chunk of the working population – the Office of National Statistics (ONS) reported in October 2019 that 92.6% of fathers with dependent children are in work. Becoming a father is major life change, possibly the most significant in any man’s life and while it represents a time of great excitement, it can also be a source of considerable stress.

Long before the pandemic reared its ugly head, Daddilife found that three in four dads reported feeling stress trying to juggle work and family life, as men face the challenge of how to be a great dad and have a great career.

It seems that dads are ready for change. GQ magazine found that the number one aspect of modern masculinity, identified by 66% of respondents was ‘being a present father’. In coaching work I do with clients, dads often mention they want to be the type of father they don’t remember growing up.

I’ve written before about how men want access to flexible working. Even before the pandemic, research by Zurich and the government-backed think tank Behavioural Insights Team found that many more men also applied for roles when they offered flexible working options, suggesting the issue is just as important for them as it is for female candidates.

Consider this response from that survey: “Being a dad and husband in lockdown has been challenging. I have spent more time with the family than I have at any point in the last 12 years. Equally, it’s been very rewarding to share in what is possible during these challenging times”.

2. Dads fear being seen as 'uncommitted'

When initiatives such as flexible and part time working, and enhanced maternity pay are seen as just for women, men are reluctant to access them and a two-tier system emerges in the workplace. Assumptions about who is likely to take extended parental leave creates the opportunity for discrimination against women long before they become mums and even if they don’t.

A fear of being seen as ‘uncommitted’ and losing out on opportunities to progress and thereby provide for their family puts off men who may want to access flexible working, especially in workplace cultures that see childcare responsibilities as optional for dads. – the ‘can’t your wife do that?’ culture is a real barrier to men seeking flexible working patterns.

In fact, so ingrained is the societal assumption that men in heterosexual relationships have the ability to opt out of domestic and caring responsibilities, that ongoing PhD research from Anneke Schaefer at the University of Liverpool is discovering that single dads who have started new heterosexual relationships conceal that truth to maintain access to flexible and remote working opportunities that they fear they might lose.

Research also shows that 40% of working dads have their flexible working requests turned down, while one in five working dads with flexible arrangements felt discriminated against by their managers and co-workers. Meanwhile TUC research discovered that an even greater percentage of dads (75%) had their furlough requests for childcare reasons turned down.

When you remove childcare provision (school, nursery, grandparents), equality at work is frequently defined by equality at home. Whether it’s the writing shopping lists, making sure the children’s PE kit is ready on the right day, or ensuring that birthday cards and presents are purchased in good time, even in dual income families, women generally take on the majority of the practical and emotional labour in home – this is often called the ‘mental load’.

Founder of the Career Mum Facebook group, Amanda Newman, perfectly illustrated this point while writing about mental capacity and mental load: “we know that mental capacity is an important leadership trait, and I may be putting two and two together and making five – but couldn’t this mental load that we carry diminish our mental capacity at work? I just don’t have the privilege to dedicate my whole thinking to work issues. I do the best I can though whilst also carrying a significant mental load”.

In order for dads to become more emotionally and practically involved in unpaid labour in the home, they need support. This in turn creates headspace and mental capacity for their partners.

Supporting new dads is about reframing the conversations around parenting in the workplace. While large numbers of dads want to be more hands on and active fathers, focus is needed to remove some of the practical and cultural barriers that reinforce the assumption that, in the main, men are breadwinners and women are carers. Those assumptions are highly damaging to both sexes. If we want to change things for the better – for both men and women – we need to ensure dads are a key part of the conversation.

To learn more about what I do, why I do it and how we can support new dads in the workplace go to www.inspiringdads.co.uk/why