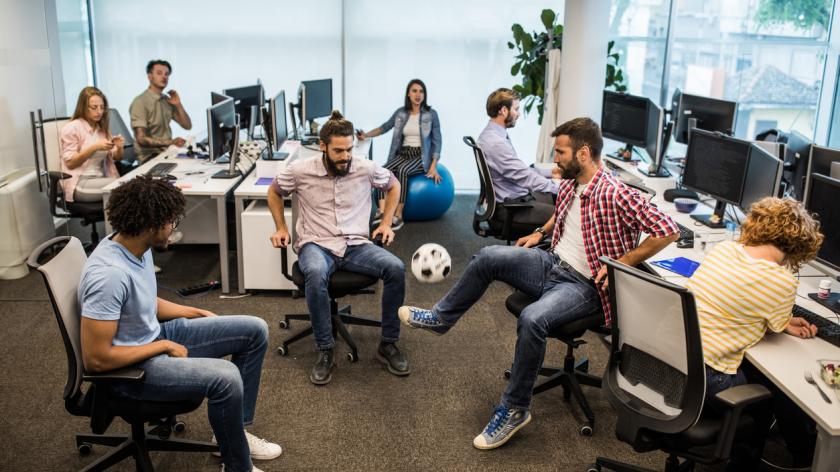 Why keeping office banter is important for the workplace

Informal conversations at work are important, but being mindful will help to prevent banter from crossing the line.

The topic of ‘banter’ at work hit the news recently when it was discussed on the BBC’s Today programme, with some commentators arguing that sports chat can lead to ‘laddish’ behaviour such as chats about sexual conquests. So should it be banned altogether, or do we simply need to exercise moderation when it comes to non-work related chat?

The Oxford Dictionary describes banter as ‘the playful and friendly exchange of teasing remarks.’ It's also been identified as a useful communication device for enabling people to engage with difficult topics.

Banter can be positive, as it can develop relationships, reduce stress, diffuse tension and it can really help support people working together. Negative banter that crosses the line, however, and becomes unacceptable is just bullying by another name.

The term is more contemporarily used to include activities as well as chat. Something that's playful, intelligent – banter is something you can possess. You can have banter and you can be without it.

Banter undoubtedly serves a function in organisations, as it can be used to make a point or to stop things being boring; it’s part of socialising and celebrating. It's a way of conveying the culture of an organisation and may be used define and highlight someone’s status in an organisation. Banter has many, many roles and is very important.

When is banter not ok?

In 2018, we researched banter in the workplace because of the spate of news stories that had highlighted the prevalence and perceived acceptance of sexual harassment in the workplace, which was often dressed up as banter. It was being used as an excuse to justify sexism, racism and other sorts of behaviour that have no place at work.

We surveyed more than a thousand of our members and found that 73% wouldn’t ban banter in the workplace, indicating a widespread acceptance of the benefits of good rapport with colleagues.

We also identified the many negative effects of banter, however. It could result in people losing confidence, affecting performance at work and impacting mental health – ultimately leading people to avoid work and social situations. Banter might just be a bit of fun, but it’s something we need to take seriously.

Banter can be positive, as it can develop relationships, reduce stress, diffuse tension and it can really help support people working together. Negative banter that crosses the line, however, and becomes unacceptable is just bullying by another name.

Figuring out where to draw the line can be tricky for business leaders. Anti-bullying practitioner John Kahn identified three types of banter: 1. friendly – no one gets hurt; 2. ignorant – no one is intended to get hurt and if they are, an apology is forthcoming; 3. malicious banter – designed to humiliate someone. I’d add ‘acceptable banter’ as a fourth category – which is ok in some work situations but not in others.

Why we should discuss ‘the game’

Our new research, New decade, new direction, which examined people’s job satisfaction entering the new decade, revealed that for 77% of people who are satisfied in their jobs, getting on well with colleagues is the most important factor when it comes to job satisfaction. These good relationships are often built on informal conversations, when you’re not discussing work.

It’s a process of being very mindful of conversations that include, equally mindful of those that exclude, and really tuning into what’s going on.

Trying to ban topics of informal conversation, because they risk alienating certain people, is somewhat counterproductive. Of course, as a topic, sport can exclude anyone who doesn’t enjoy football, cricket or tennis. Being in an office with people who are hovering over their phones all the time during the high point of the transfer window, playing fantasy leagues, or obsessing over last weekend’s sports results, is pretty dreadful for anyone who isn’t interested. There are, however, lots of men who aren’t interested in football – and lots of women who are.

The key issue here is not the topic of the conversation. It’s how do we know what works in each and every context? How can we legislate for conversations that may have a terrifically positive effect in one aspect, but may be slightly alienating in another? It’s entirely conceivable that a conversation could be a vehicle for inclusion that just so happens to touch on a topic that may be a vehicle for exclusion.

What can management do?

The real questions for leaders and manager are: what are the dominant, conversational themes? Who is being left out? How are they being left out? Could we change up, or roam around, the various topics of conversation so that everyone has an opportunity to contribute to that informal part of working life?

It’s a far harder challenge than saying, ‘we’ll have no more talk of football’. If you start making sweeping generalisations, it really puts people’s backs up. Attempts to curtail office banter are often criticised as ‘political correctness gone mad’. It’s an easy defence but to some, for example, a sexist joke is sexist before it’s a joke and to others it’s a joke before it’s sexist.

The assumption that topics of conversation are specifically gendered is dangerous for all underrepresented groups. You can only know what works when you’re there, in the context of your workplace. It’s a process of being very mindful of conversations that include, equally mindful of those that exclude, and really tuning into what’s going on.

For people whose passions are football, cookery or foreign travel, their natural assumption is that their enthusiasm for those topics is infectious, but others in the room may find them rather boring. When you have a lot of people who are buying into a subject that you’re not particularly interested in, it can become even more boring. So yes, let’s be mindful what we talk about at work – but by the same token, let’s remember how important talking to other people at work actually is.

Interested in this topic? Read Communicating company culture: understanding the role of unique language in business.

Prior to joining The Institute of Leadership & Management Kate Cooper worked in the university sector. She has appeared on, amongst others, BBC Television, BBC Radio 4 and has a regular column in Dialogue magazine. She is a key note speaker at conferences and provides expert commentary on a range of topics arising from her own research and...