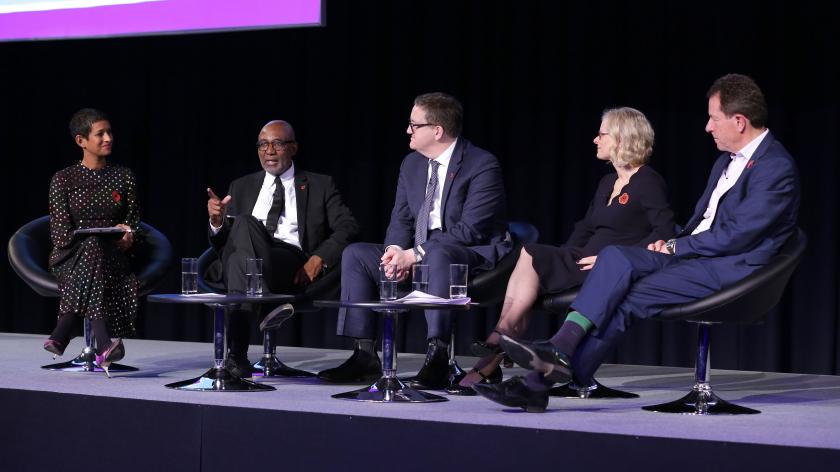 CIPD ACE 2019: fairness as the foundation of good work

The issues of equality and fairness are fundamental to good work, and that’s the message that shone through at the CIPD’s Annual Conference 2019, which took place in Manchester on 6-7 November. While actual change may be slow, it is promising to see people speaking up on the issues that matter – and we must remember that change won’t happen overnight.

The first day of the CIPD’s annual conference came on the same day as the official kick-off date for the general election campaign as well as National Stress Awareness Day. This was merely coincidental, but the colliding of these two latter events accentuated the fact that we are deep diving into uncertain political, business and economic landscapes and, against this unnerving backdrop, we are facing a wellbeing crisis, with work-related stress, anxiety and depression being the biggest cause of absences from work.

Bleak as it may be, this is the terrain in which the people profession is striving to build better workplaces.

If we’re not starting from a point in which our organisations are treating all of its potential hires and employees fairly, which is surely a fundamental of ‘good work’, then we have nothing on which to build the other key elements.

Chief executive of the CIPD Peter Cheese stated in his opening address: “the uncertainty in business is fuelled by the uncertainty around us”. We’re not just talking about Brexit here. Massive social populous movements such as MeToo, Occupy and Extinction Rebellion signify that people feel empowered to speak up, call out wrong doings and demand positive change. For businesses, this means there is growing pressure to be more transparent, trustworthy and socially responsible.

How is this playing out? We’ve already had two rounds of gender pay gap reporting and there is now talk of introducing ethnic pay gap reporting to help bring to light the huge disparity in pay between different ethnic groups. Progress on the former has been ‘dismally slow’, however, according to equality charity the Fawcett Society, so we have little reason to expect the pace of progress to pick up for other minority groups.

With the CIPD striving to champion ‘good work’ against this turbulent backdrop, it’s no surprise that the opening panel discussion honed in on the issues of equality and fairness.

If we’re not starting from a point in which our organisations are treating all of its potential hires and employees fairly, which is surely a fundamental of ‘good work’, then we have nothing on which to build the other key elements.

As Trevor Phillips OBE highlighted, while this idea of good work comprises several things, including meaningful work, autonomy and a transparent culture, “fairness is number one”.

There’s a long way to go to achieve this, but businesses are starting to recognise that they need to shift their focus beyond the desires of their financial stakeholders to their employee stakeholders, noted Susan Clews, Chief Executive of ACAS. “The reputation of businesses can get blown out of the water overnight and they can’t just put a sticking plaster over the issue.”

Arguably, the driving force behind creating better workplaces for all people should not be fear of getting caught out. Rather it should be that it’s the morally right thing to do. Either way, employers need to do more to listen to their people, they need to let the good, the bad and the ugly come out of the woodwork and address everything openly.

The long game of diversity

The fact that progress is slow in the diversity and inclusion space is not necessarily through lack of trying. In Trevor Phillips’ session on ‘the dark matter that is defeating D&I’ he acknowledged that many people within the HR profession are doing great work to effect change within their organisations, however seemingly intractable problems keep arising that we don’t always foresee.

One reason for this, he says, is that we’re not grasping how much of a long game the diversity challenge is. This point was demonstrated through the example of the disproportionately high number of white non-British football managers in the Premier League.

While reform on how we measure value is desperately needed, we’re not even having the right conversations about this yet.

One of the key skills required of football managers today is to speak several languages, but many of the British players, white or BAME, are only able to speak one language and are therefore not making the cut, leaving more white non-British players to fill these positions. (It’s important to flag here that black players are far more disproportionately affected – there are still a lot of white British managers, but they have been on the decrease.)

In response to this, language learning is now provided to footballers from the age of 20 in the hope that later down the line they have the capabilities required to become a manager. The point of telling this story? “This is a long game and we need to start early,” says Trevor Phillips.

Here are some other useful considerations that came out of his session on ‘mainstreaming equality’:

Looking through a macro lens, the issue of fairness came to the fore in Professor Mariana Mazzucato’s whistle-stop tour of economics, which closed day one of the conference. Since we measure productivity through equilibrium prices, our economic system does not recognise the value of domestic and care work, she argued. This leaves those doing this essential work (still predominantly women) to be exploited.

While reform on how we measure value is desperately needed, we’re not even having the right conversations about this yet: “The economics debate has become very sterile and it’s not helping us to change the system we’re in,” Mazzucato highlighted.

Coming back to the fairness and inclusiveness of our businesses, at least we can say that we have opened up the dialogue, and that more people feel empowered to speak up.

To keep this moving in the right direction, HR must continue to encourage this conversation among both leaders and employees and remember to focus on actions that drive us – in the long run – towards fairness and transparency at work. There are no quick fixes here.

Becky is Managing Editor of HRZone and Trainingzone, global online communities of people working in the HR and L&D industries. Becky works closely with leading HR and L&D practitioners and decision makers to ensure the publications offer a rich source of real-world insight and fresh advice to their audience.

Equality and fairness will only happen when CIPD start to weed out their members who support and engender inequality and lack of fairness in workplaces. HR departments are part of the life cycle of recruitment/dismissal. They see the lack of fairness in action. They support the workplace bullies, misogynists and racists by turning a blind eye to bad practice and shutting down valid grievances and whistleblowers. It is difficult to take articles like this on events that are led by CIPD when they are at the forefront of male/pale/stale agenda.

Thanks very much for your feedback. Speaking broadly on the issue, we do have a long way to go to achieving fairness and equality at work - there is no doubt about that. I think a positive first step is that we're starting to have open, frank conversations about the issues at play. As I say in my write up, progress is moving slowly, but continuing to encourage and move the conversation forward into action is a helpful step.