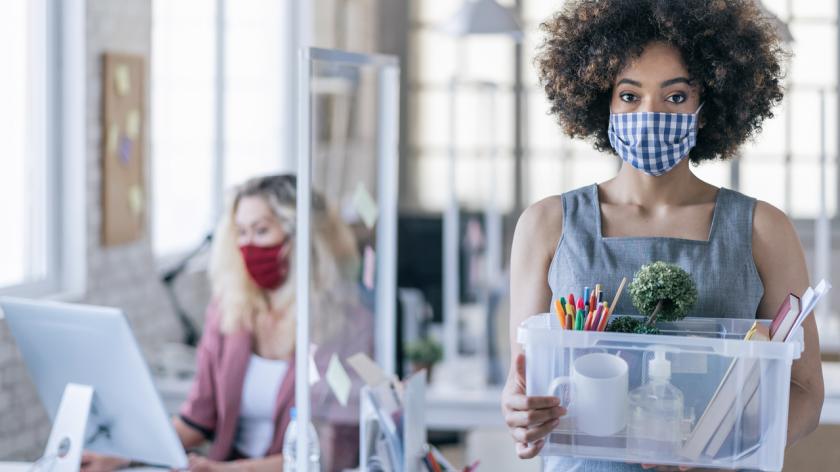 The 'Great Resignation': Why HR must evolve the employee value proposition

As the pandemic begins to subside in some countries and a return to the workplace begins, employers should brace themselves for a mass exodus many are calling ‘The Great Resignation’. Millions of employees say they have been unhappy with the treatment they received from their organisation during the pandemic and are on the hunt for a more compassionate employer.

Right across the world, evidence is emerging of a strong desire for millions of employees to move jobs once the pandemic has ended. Around half of Americans say they are thinking about what job they want in a post-pandemic world. The Microsoft Work Trend Index found that 40% of people say they’ll switch jobs this year and Morning Consult say 1 in 4 are ready to quit.

But it’s not just the knowledge workers who could work from home that want to quit. Hospitality and retail workers are quitting for higher paid jobs. A friend of mine runs a restaurant that I visited a few weeks ago. He’s the owner and chef, but he was serving the food. His chef had quit to work in insurance for more money. Millions of retail workers say they feel drained and unappreciated after the pandemic and are quitting in record numbers.

The last few years have accelerated quite a few already growing trends. In 2019, employees were quitting their jobs at a faster rate than ever. There were 40-year high levels of employment in the UK and the US and employees felt like they had control over where they worked. While the pandemic put a halt to that, the signs are strong that a return to high employment is on the cards, and it becomes a buyer’s market for employees once again. But when that happens, employers must be prepared to give employees the experiences they need to attract and retain the best people.

The world changed – and so did we

The pandemic changed so much for us. We stopped handling money, more people than ever shopped online, video calls became the norm and hospitality evolved forever. But we also became more aware of the inequalities in our societies and employees found new and better ways of working. They had a taste of autonomy, trust and fairness and it's clear they don’t want to go back to the old ways.

So, what do they want? No surprise to me at all – it’s the same stuff they’ve always wanted but were rarely offered.

‘The Great Resignation’ is a movement fuelled by self-care, by burnout and underappreciated staff.

Employees overwhelmingly want more flexible work options. As many as 88% of knowledge workers say they want complete flexibility over their hours and location. We are already seeing the damage a failure to shake off the shackles of command and control is having on some employers. I was told on Twitter a few weeks’ ago of an employer who recalled all of their developers back to the office permanently. The result was an immediate departure of 10% of them. But it’s not just the traditional office worker that is demanding more flexibility over how and where they work.

The world’s first pilot of flexible working on construction sites has had a significant impact on employee wellbeing. Four of the UK’s largest construction companies recently ended an 18-month pilot that found that flexible working can be successful in the most unexpected places and roles. The pilot tested a consultative method of setting shifts that took workers personal preferences into account. It also tested enabling workers to accumulate hours to take additional time off and based working hours on output, rather than time.

Employee wellbeing increased significantly (in an industry with a historically poor record), overwork decreased and trust in colleagues increased. The impressive results show that even those employers who thought more flexibility would never work in their organisation are probably wrong.

2. A reimagining of productivity

But as well as flexibility over when they work, employees are increasingly demanding changes in how their success is measured. When conducting research for my book back in 2017, I became familiar with a 2010 experiment into results-orientated work environments (ROWE). I’ve lost count of the arguments I’ve had with people over the years about its effectiveness (despite some compelling evidence).

Yet in 2021, employees are now saying they want their employers to reimagine what productivity is and how it's measured. As many as 86% say they want to work for a company that prioritises outcomes over output, yet unfortunately 70% of organisations don’t work in this way.

We also saw an employee benefits renaissance during the pandemic. Overnight, millions turned to their benefits packages for support and as a result, the demand for certain insurance and wellbeing products skyrocketed. But discerning employees began to see through useless and gimmicky wellbeing benefits and instead began to demand those with real, tangible benefits to their lives.

The pandemic reminded us of our finite lives and the fragile state of our income and savings, so demand for life insurance and income protection grew significantly. As a result, more than half of employees now say their benefits package should be designed to help them with their health and wellbeing.

And lastly, almost everyone wants more diversity at work. A common misconception that only the marginalised communities want an inclusive environment has been debunked thoroughly. The vast majority of people want to work for an organisation that prioritises and celebrates diversity. The pandemic highlighted the many challenges marginalised groups face, and brought to the surface the inequalities that still exist in our society. For those employees that wish to see a more egalitarian and fairer society, they believe the employer should be leading the charge.

There is already evidence that many industries are facing a skills shortage. HR leaders within financial services say they are growing concerned. Among the main industries expected to suffer a mass exodus is the tech industry. For tech employers, the next big skills crisis is likely to be those with digital skills. While working from home became the norm for many tech and knowledge workers, bad management and burnout has plagued the industry. According to a recent survey by Qualtrics, almost half of tech employees say they will be job hunting over the next 12 months. Employers really can’t afford to lose skilled workers like developers as they may never be able to replace them.

But it’s not just burnout and managers that are forcing the desire to move jobs, most employees say the pandemic has made them reassess their career goals and they now feel like they have more control in deciding where and who they work for. Given the opportunity, more than half say they would retrain into a different career completely.

Employees are looking to improve their lives following the pandemic and those employers that embrace their wellbeing, prioritise inclusion and give more flexibility will be the ones who succeed.

Get ahead by looking back

What humans want from life and work hasn’t changed much in hundreds of years. We all want to have control over our jobs, autonomy and to be trusted to do them. We want recognition, decent pay and benefits, a sense of purpose and a community that we can feel part of. I genuinely feel that those employers I work with who already ‘got that’ and gave staff what they wanted, weathered the pandemic better than the rest.

Before the pandemic hit, the UK and US had record levels of high employment. The signs are there that this will again return soon and it's giving employees a lot of confidence. The pandemic showed employees what their employer really thought about them, and many were disappointed with how they were treated.

Many workers are keen to prioritise themselves and their own wellbeing going forwards and are now more empowered than ever to find the employer that works for them. ‘The Great Resignation’ is a movement fuelled by self-care, by burnout and underappreciated staff. Employees are looking to improve their lives following the pandemic and those employers that embrace their wellbeing, prioritise inclusion and give more flexibility will be the ones who succeed.

Interested in this topic? Read: How HR can mitigate the mental health impact of office re-integration

Gethin is a psychologist who has been helping some of the world’s largest organisations to improve their employee experience and wellbeing for almost two decades. The last 9 years have been spent working as part of the senior leadership team at Benefex.

As a frequent writer and speaker on employee experience and employee...