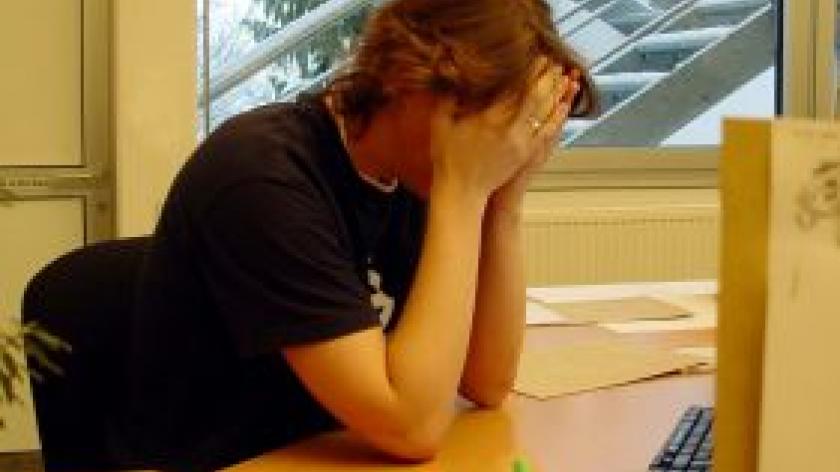 Viking questioned 2000 office workers on their levels of stress throughout the working week. In the separate study, 200 volunteers answered stress-related questions and had their body temperatures measured at different times of the week.

Forty-one percent of the 200 volunteers recorded a stress temperature of 18C – 24C, indicating a level between ‘highly stressed’ to ‘anxiety.’ The least stressful day was found to be Wednesday, with just under a third (32 percent) registering levels of stress. Friday was one of the more stressful days – perhaps as workers battle to clear their desks for the weekend. Just 11 percent of people reported being stress-free.

Over a quarter of UK office workers reported feeling stressed every day, with around a fifth fearing for their job due to the lingering effects of the financial crisis. Just under half reported that stress is physically affecting their health.

Workers reported various reasons for their stress; 26 percent blame an inconsiderate boss, over a third (36 percent) blame incompetent colleagues while two-thirds (66 percent) say their current workload is the root cause.

Broken down by sector, employees in the IT industry reported the highest levels of stress at 33 percent reporting daily struggles. Just over four in 10 teachers blamed incompetent workers for elevating their stress levels, while 44 percent of HR workers pointed the finger at their boss.

Geographically, the North East was found to be the most stressed region, with 34 percent of workers reporting feeling stressed on a daily basis. London came in third (30 percent), just behind the Midlands (31 percent).

To cope with stress, 44 percent of those surveyed work unpaid overtime. This was most acute in the legal sector, followed by travel & transport and HR.

Neil Shah, stress expert at Viking, commented on the results: “This research shows that many people in the UK today are working under some dangerous levels of stress – they may not even be aware of how stressed they are. Tension and stress can manifest themselves in many different ways, but can be linked to long term health problems such as headaches, heart problems and depression.

“From a business point of view a stress-free worker is a more productive, proactive and valuable one. Ensuring really simple things like people taking a lunch break or doing exercises in the office can make a huge difference.”

If you want to know more about one of the many possible causes for the increasing levels of stress and mental illness being suffered by people in the workplace, then take a good look at this report:

A recent study by The University of California revealed that staff who constantly checked their email changed screens twice as often and went into a high alert state of mind.

Not only that but when they took a break from email they were more focussed and more relaxed – making them more productive as a result.

While email has revolutionised the way we communicate in business it has become the default method of communication. Email etiquette training re-trains us to use email more responsibly.

This is important as so often the way we interact with others defines us and improves our wellbeing. Email can cause high levels of stress if staff are not trained how to deal with it effectively.

It is too easy to send emails almost by default yet take no responsibility for the impact email overload has on others.