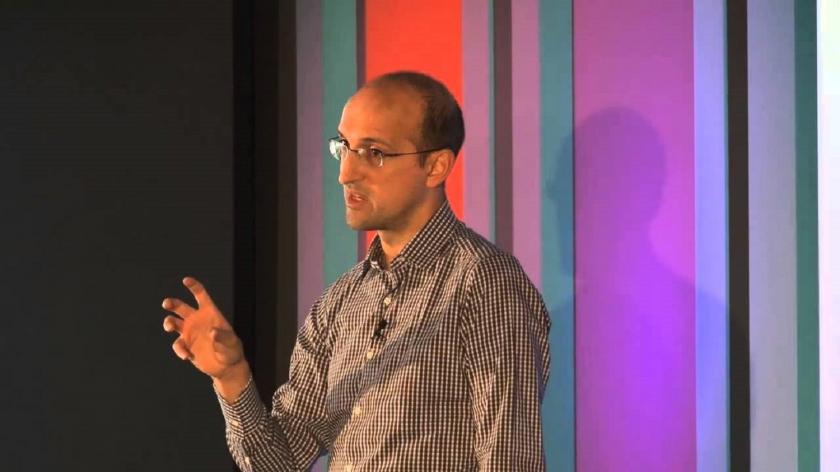 "Talent is one ingredient in how success happens."

This is an interview with Matthew Syed, who is the former top-ranked table tennis player in England: since retiring he has been on a mission to challenge the commonly-held assumption that talent is fixed and innate and that it is the only variable in whether we succeed or not. He has written two books around the subject, Bounce and Black Box Thinking. His work is bound up in the concept of growth mindsets, pioneered by psychologist Carol Dweck.

Jamie Lawrence, Editor, HRZone: You’re trying to redefine common beliefs around talent as something that is malleable. What is the current situation you’re grappling with?

This measurably affects behaviour and if a critical mass of people in an organisation worship talent then it can really hold that organisation back.

There can often be a negative correlation between, for example, IQ and performance when people are in the wrong mindset because they don't like to admit to their mistakes because their ego is threatened by it. If they feel others view them as untalented if they make mistakes, they cover them up or spin them. Of course the higher IQ can use more sophisticated techniques to spin their errors: you see this with Economists and CEOs.

The key is that if you get an organisation into the right culture and the right mindset it unleashes peoples’ innate dispositions to learn and drive progress.

[JL] The concept of your new book, Black Box Thinking, is we need to think more like the airline industry, which is held up as a sort of ‘poster child’ of the no-blame, learning from mistakes cultures we all strive towards. But how much is that driven by the environment and the mission-critical nature of planes working and not failing at 35,000 feet?

[MS] The Black Box analogy is about driving system safety and it's very well-known now that black boxes are one of the key tools that drive learning from accidents. Many innovations have emerged from accidents but also near-misses and simulator learning.

Businesses don't have all the answers when they're strategizing: you’ll never have all the answers but you must be able to progressively and systematically improve your understanding by leveraging data and the experiences that arise in a dynamic process of change. And aviation does that very well.

The black box method is not appropriate for all contexts but it's a very good way of conceptualising the issues around continuous learning: out of challenges often come the best learning opportunities. Accidents in aviation are big violations of expectation.

Nobody gets on a plane expecting to crash otherwise you wouldn't get on. The things that are most threatening to us are often the most powerful in terms of driving systemic change.

[JL] Let’s take an example outside of aviation, say a retail organisation. How could they apply this thinking to systematic improvement?

[MS] There's a huge range of things that can be done to systematically improve performance over time: you could run a randomised control trial to test certain assumptions about the way consumers are behaving. You could start with a pilot scheme to learn at low cost before rolling out big.

The key point is that all of these aspects of strategy emerge from an underlining belief, a prior belief that learning is possible, that we don't have all of the answers.

If you’re sitting at the board table thinking “yeah we know what we’re doing, we’re extremely intelligent people,” it’s much more threatening to try and systematically test and learn than if one recognises that even if one is very experienced and has a great deal of domain knowledge there's still the capacity to improve it.

To take an example, when Dave Brailsford became the Head of Team Sky he went about trying to systematically improve performance – despite the team being good and he being admired as a great coach.

He used a technique called Marginal Gains which broke the problem of winning bike races into its component parts and tried to improve on each of them by one percent. I think that's directly applicable to many retail organisations up to a point.

But in essence there are a whole range of techniques that can be used from marginal gains to black box thinking to randomised control trials. They all have the same underlying psychological rationale which is continual improvement.

[JL] What needs to be done in society to make this approach less threatening to people?

[MS] Ultimately these techniques drive improvements and performance and at some point that will filter through into the mass media.

I think what the public wants is progress: they want to know where the weaknesses are. When these come out, they may lead to a very short-term loss in public trust but very rapidly the public comes to understand that organisations that are systematically learning are trustworthy organisations.

The same happened in the history of science: people were very worried if scientific assumptions were undermined by new experimentation and yet science now as a method has great public confidence.

We invest a certain degree of faith in science because we know that it has a reliable method of learning from its mistakes.

It's no good saying “oh we're worried about driving improvements because it might lead to short-term loss of public confidence.” I think one has to just drive through that fear.

[JL] What’s the role of HR in implementing some of this thinking?

[MS] The key is to create a resilient, growth-orientated and adaptive culture where people share information and are not pre-emptively blamed.

Now that is quite an easy sentence to say but it's more difficult to do in practice. And yet it seems to me - and I've been lucky enough to go into many incredibly cutting-edge organisations – that having that kind of culture is a very powerful driver of success.

If you look at Team Sky and cycling where there were very objective measures of success, the success didn't happen because our Olympians became more talented. There wasn't a genetic mutation amongst British cyclists: it was to do with a very powerful method in great leadership.

It's unleashing peoples’ innate talents and abilities and inquisitiveness and curiosity and that's what the right culture does.

[JL] Team Sky and aviation are obviously very specific examples. Is there evidence of organisations less in the spotlight that are making progress in this area?

It's not just that organisations have become more adaptive but people are more open about their mistakes so it's a more powerful flow of information, greater collaboration and high levels of trust and motivation.

It is absolutely something that organisations are trying to do all the way from retail supermarkets to investment banks and hedge funds.

One thing I have noticed is it helps a great deal to have buy-in from beyond the HR function from the senior leadership of the Chief Executive or the Chairman of the company. It helps a lot to have that as well to drive the cultural change. It doesn't matter if it's Team Sky or any commercial organisation; I think the same psychological realities apply.

[JL] And who tends to drive it in these organisations that you've been in to: is it coming from HR?

[MS] Generally I think HR professionals really understand this space and are interested in it and have read the background literature. But my sense is that often that advocacy – unless it gets sponsored by senior leader buy-in - doesn't happen. It just fizzles away.

Having the leader of the company really buy into it is important. I'm sure it can happen without that but it helps a lot.

[JL] You were the #1 rated table-tennis player in England and you’ve spent time mentoring and coaching young people in sport. Is this mindset coming through?

[MS] I think there's a real talent culture with the X Factor: this idea of instant success and talent being capable of driving people overnight effortlessly to the top. I think that is a problem for young people.

I speak at head teacher conferences quite a bit and they often say they're battling with young peoples’ perception that you don’t need hard work if you’ve got the talent.

The danger there is if people think success happens instantly for the talented, they may try something new and give up immediately if they aren’t good because they think they ‘haven’t got it.’

Black Box Thinking will hopefully equip people with a much more realistic understanding of how success happens and that's part of a way you build a growth resilient mindset. But I'm not unrealistic enough to think that it's making a huge difference. I think it's making a difference on the margins, but we're yet to have a real revolution in this.

[JL] You've obviously been a writer and journalist for many years as well and you talk of ‘good quality’ practice being crucial to improving performance in sports – we can understand that simply. But what about writing – you’ve improved over your career, but what counts as ‘good practice’ in writing?

[MS] That's a good question. I think it's always worth trying to get good feedback; one of the advantages of writing for a newspaper is that you have readers comment at the bottom of the page and I always read the comments.

I get feedback from my Editor. I also look at Twitter, which is not always a representative group but take a look and see what they're saying. You should also read great writers and learn from them.

For your own work, reflect on the pieces you write and think about what you could have written differently. And pursue it with passion. It's the same basic approach I suppose as anything. Listen to meaningful feedback and be reflective of how you could improve.

[JL] Can you leave us with a couple of tips for how people can develop or hone a growth mindset?

[MS] There's a couple of things. People tend to develop a growth mindset when they have a more realistic understanding that success emerges from application, long-term hard work and getting good feedback. So they see this as part of how change happens.

Of course when they're in that mindset they begin to deploy those behaviours to look for feedback, they become more pro-active and language also can be quite powerful in shaping the way people think about success.

Classically praising people for the effort that they've put in, for the processes they've used, for the techniques is the right way to go. This is instead of saying “well done you're a genius” or “well done you're super talented” which insinuates that they have a fixed gift from which their performance emerges.