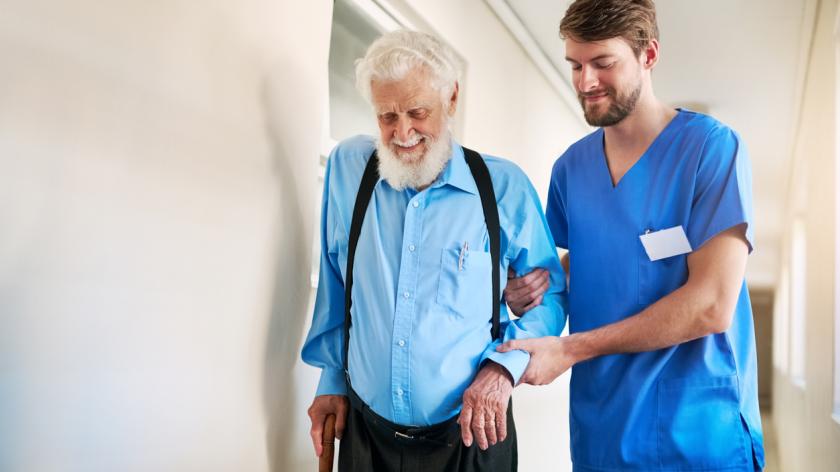 Gender imbalance in the social care sector: time to plug the gap

We need to make careers in the social care sector more inclusive for men – before it’s too late.

In the UK currently, there is a distinct lack of male nurses, male childcare experts and male adult social carers. In fact, there is a shortage of men in the social care sector altogether – they are hugely outnumbered by women. UK government statistics show that a staggering 84% of carers in England are women, and just 16% are men - figures that have barely changed since 2012.

It is estimated that by 2025, 1 million more care workers will be needed to cope with the UK’s ageing population, and men could help to plug this gap.

The core values that underpin social care – dignity, compassion, choice and respect – apply just as much to men as they do to women.

I believe that social care organisations could do a lot more to simplify the application process by introducing shorter and ‘mobile-friendly’ forms which would also appeal to a younger audience. I also believe that the introduction of more ‘values-based interviews’ could support men more, instead of basing interviews purely on previous experience and role competencies.

We believe that this is largely due to our high-quality recruitment strategies that include unique and innovative solutions to support candidates from application to interview and beyond.

More needs to be done now to highlight the value of those working across the social care sector.

Helping candidates with application forms, providing prep sheets and video tutorials before interviews, are just some of the ways we can support applicants.

Men may struggle to be recruited for roles because of gender stereotypes in these traditionally female-led jobs, and this gender-based stigma is hard to shake. However, men can play an essential part in the social care sector, especially when caring for men from the older generation.

Whether you’re male or female, the fact remains that the social care sector offers a huge number of benefits.

Some men would rather be cared for by another man, especially if the care they require is quite personal. A male carer can also sometimes help to put residents at ease, as they may feel comfortable communicating with someone of the same gender.

Men can also be physically stronger than women, and can assist with lifting residents safely and gently. In fact, our clients sometimes request men where the service is made up of more male service users, or to balance out diversity where they have more female carers in place.

There has been a wide recognition particularly recently, on the key role doctors and nurses play in the NHS, but more needs to be done now to highlight the value of those working across the social care sector. This in turn will help with the much-needed national recruitment drive and showcase the wide-ranging and fulfilling opportunities available to both men and women.

Whether you’re male or female, the fact remains that the social care sector offers a huge number of benefits including job security, a sense of reward and ‘making a difference’, as well as the opportunity to progress up the career ladder within an organisation.

Darren Jones, aged 39, became a care worker after previous employment in warehouse and factory settings after leaving school aged just 16. After resigning from one role, Darren spoke with a careers advisor at the local job centre who asked whether he had ever considered a job in the care sector and invited him to attend an open day.

“I attended a social care open day at the job centre and met with multiple care homes and care providers.

“I really connected with The Fremantle Trust and they were interested in me because I hadn’t worked in care before, but as a father I was used to looking after other people. This also meant that they were able to train me in the way that they wanted – I didn’t come with any baggage.”

He joined The Fremantle Trust where he currently supports adults with learning disabilities. There are currently 12 residents ranging in age from 25 to 73.

“I’m really enjoying working at the home - each day is so varied. On a day to day basis we try to help the residents decide what they want to do, to encourage them to make independent choices, this can include taking them swimming or bowling. One resident really likes trains, so I take him on regular train rides, which he loves.

“I have gone through multiple training courses since starting at The Fremantle Trust last year and am in the process of finishing my BTEC level 2 in caring.

“My tutor has advised me to take my Diploma level 3 once I’ve finished the BTEC. Holding a level 3 will enable me to get a managerial role which is something I would never have had the opportunity to do before going into the care sector.

“I wish I had gone into care sooner and would really encourage other men to consider a career in social care. It’s just so varied and at the end of the day, you really do feel you have made a difference to someone’s life.”

Read more from Will Shepherd
Advertisement