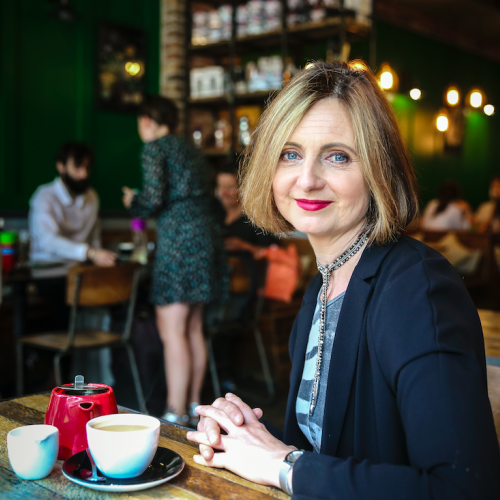 A journalist, broadcaster and academic, Sarah became CEO of UK Council for Psychotherapy in September 2017, and is tasked with shaping the organisation to play a leading role in improving access to high quality talking therapies. She is cut from very different cloth to most professors and CEOs we know. She is a published author on musician Prince, has arms full of tattoos and writes from her houseboat on a north London canal.

Sarah’s own background is not “average” for a chief executive. From a working class family in Merseyside, she was raised solely by her mother from the age of two. NCTJ-trained, she worked first as a journalist in the North-West reporting on stories like Hillsborough and the murder of James Bulger. She then moved into university lecturing, training students in journalism, before relocating to London in the mid-1990s. She subsequently achieved a Masters and a PhD in psychoanalytical theory and visual culture.

Previous to joining UKCP, she was professor and associate dean at University of Westminster’s School of Media, Arts and Design and she has published research on media, trauma and ethics as well as popular music and identity. An academic fellow of the Dart Centre for Journalism and Trauma at Columbia University, she commentates on media ethics, specifically trauma and journalism, for a range of outlets. Sarah is co-author (with Stan Hawkins) of 'Prince: The Making of a Pop Icon' (Ashgate) and numerous other books, chapters and articles. She has presented to the paying public on pop culture at Latitude, the Southbank and the ICA.

The climate crisis: five ways to support employees with eco-anxiety

It can be as simple as feeling upset or angry in the office kitchen, seeing colleagues eating from single-use plastic containers then...
Change

Mental wellbeing: why the creative industry is harming its employees

Free yoga classes won’t fix mental wellbeing in the creative industries. It requires a bigger shift in culture and leaders with more...
People