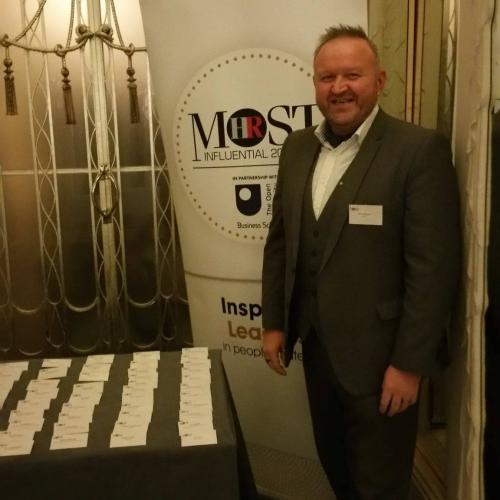 Perry’s first book "Transformational HR” was an Amazon.com Top 30 HR seller shortly after its release, and his second book - "The Energised Workplace" - exploring Human Energy & Organisation Design is due in April 2020.

Perry’s work in progressive thinking in HR and the workplace of the future was recognised by his inclusion on HR Magazine’s HR’s Most Influential Thinkers List for 2017 and up to 5th most influential in 2018.

Perry is Adjunct Faculty at Ashridge Executive Education and Hult International Business School; he is a visiting fellow at Sheffield Hallam University and a Fellow of the RSA.  In 2018 Perry was invited to be Guest Professor at GEA College in Ljubljana, Slovenia. Perry is also the world’s only WorldBlu-certified Freedom at Work Consultant + Coach, and currently leads the London Chapter of ResponsiveOrg.

You can find Perry online at www.pthr.co.uk or on Twitter (@PerryTimms) and his blog Medium.com/@PerryTimms.  Perry is an avid fan of Soul music and supports Northampton Town FC and the NFL’s Detroit Lions.

Yes Claire. Checking in, stress testing, probing and the likes ALL essential on any team / unit working on a modelled approach.

I'm reminded of the extensive de-briefing that occurs in military exercises proving the merit that in really intense circumstances "what happened and how can we make it better". This equally applies to periodical assessments of the way things are working and that it's anyone and everyone having responsibility to shape and challenge things.

Shonette - thanks for the comment. You're clearly seeing the benefits of a looser but none the less focused way of working and that's great confirmation for someone like me who believes in it.

OK, from an observational point of view I'm dropping my thoughts on here to stimulate the discussion further. I'm not an expert in any of this, don't have evidential studies to back anything up and is based on my knowledge gleaned from others and some of my own experimentation with a community-based virtual organisation.

Hierarchies. I believe they've had their day as the ubiquitous model for work. I'm a big believer in Jon Husband's theory of a Wirearchy - interconnected, spiders-web like connectivity across people who work together and need each other. In truth, whilst we THINK hierarchies define our structure they simply report on it. There's always communities; cross "boundary" working and the dreaded matrix management. Fundamentally I believe hierarchies serve a purpose but also serve a power dynamic I no longer believe as appropriate for a modern working environment. Hierarchies have a feel of such rigidity, linearity and controlling tendencies they aren't adaptable or fluid enough for the ways we now work and live.

Holacracy: before Holacracy, I'd heard of a Heterachy via the fantastic Fons Trompenaars. He was talking about a messier version of the hierarchy where it was more an adaptive system that moved with the demands of the work. There was a lot I liked about this and as I discovered more on agile and scrum I could see how a heterarchy would serve things well. It felt like there was the "anchor" of a role and a system but the movement of an organism. Holacracy though to me is a mixture of the systems way of operating that you get in a hierarchy - some form of controlled, rigorous and even predictable sense but without the management power dynamic, personal bias/agenda/ego and creativity-aversion you get in hierarchical states. The circles way of operating allows for a fractal-like structure where it is formed around interest groups and professional expertise with forms of rotational / situational leadership and inclusiveness that COULD be voluntary.

If I were to explain it to my Dad (an ex-gas pipeline fixer and factory worker) I'd say this.

Do I have a feel for what's best? Yes NOT JUST hierarchies. Please.

Hybrids of hierarchies even. Sociocratic, meritocratic and self-organised teams/units fascinate me and appear to get more soul and guile from people than boxed up, waterfall / water uphill hierarchies.

So I guess I'll nail my colours to a more communal-like, low-friction, low-bureaucratic model and go with Jon Husband's Wirearchy merged with Fons Trompenaars' heterachy (and a dose of sociocracy in there too).

I'm not just a fan of social media (as a sociocratic, wirearchical form of digital communication) because it's new. I'm a fan because it thrives on human exchanges, informality and emergent purpose. I believe leaders in heterarchical/wirearchical structures are at the centre of the thing not at the top. I respond to that and feel it's as it should be in the 21st century.

Bet you didn't expect a third or fourth element to this tale so would be interested in what others think.