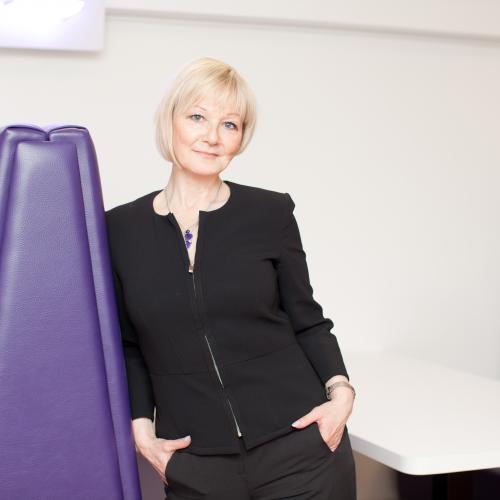 Following a successful corporate career, Jane spent a number of years as Managing Director of a specialist recruitment company, which she co-founded. Having realised that if someone could help companies to become a great place to work, there wouldn’t be such a crisis over ‘the talent war’. In September 2001, she formed learnpurple which, in line with expansion, rebranded as Purple Cubed, early in 2013.

Jane is a published, best-selling author having written 'Purple your People: the secrets to inspired, happy, more profitable people' (Crimson) in 2001, following up with ‘It's Never OK to Kiss The Interviewer - and other secrets to surviving, thriving and high-fiving at work' (LID) in 2013. In 2014 she was chosen from over 1600 authors to contribute to '20/20 – 20 great lists by 20 outstanding business thinkers’. Her latest book, 'The People Formula: 12 steps to productive, profitable, performing business' was published by Humm in 2016 and has been described as the HR playbook for the 21st Century. Jane’s writing is practical and common sense with stories and examples that clearly show how various tools and techniques can be applied to achieve results.

In addition to running Purple Cubed, Jane is a non-executive director and has been instrumental in the success of several high profile employment projects. She is the current president of HR in Hospitality, a panel member of the Economist Intelligence Unit, a visiting fellow at two UK Universities and is listed as one of the top 100 most influential women in the hospitality, travel, tourism and transport sectors.

Every three months, the editors at the Oxford English Dictionary (OED) compile their list of new words and phrases which should be included...
Development

HR, it’s time for the tail to stop wagging the dog

Jane Sunley is a UK best-selling business author of ‘The People Formula: 12 Steps to Productive, Profitable, Performing Business’ and...
Change