Meeting problems: why are they just so dismal?

What the heck is wrong with meetings? [PART 1]

What the heck is wrong with meetings? [PART 2] 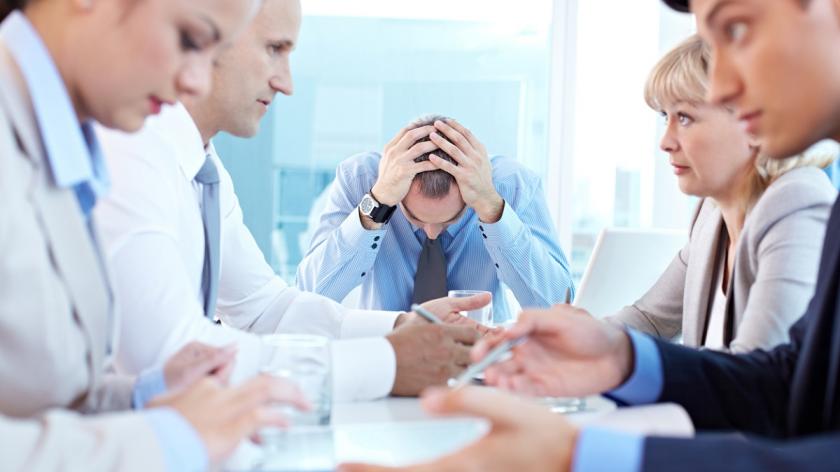 What the heck is wrong with meetings? [PART 1]

We spend approximately 1/3 of our week in meetings and about 50% of that time is wasted. That’s about a day a week per employee. Multiply that by the number of employees in your business and you can calculate the cost just in terms of salary. And that doesn’t include the lost opportunity cost.  But does it need to be this way? In the first of two articles about meetings, Blaire Palmer busts three myths about meetings that keep up stuck in this loop.

There’s so much wrong with meetings, the problem becomes where to start.

But perhaps the best place to start is what’s right with them.

But together, sitting around the camp fire sharing stories, learning from the elders of the tribe, testing out ideas, laughing together, being sombre together, making plans together, we’re at our best.

Meetings could be like that. They could and should be where you bring together a variety of brains and hearts and experiences and strengths and where all of that becomes more than the sum of its parts.

Most meetings do not make our working lives richer.

And they don’t make the company richer either. And that’s because they operate with a set of out-dated assumptions about what meetings are for.

But it has never been more important that we call these assumptions in to question.

The challenges facing business are increasingly complex and the solutions required increasingly sophisticated. What was true yesterday probably isn’t true today and won’t be tomorrow. Even the most well-informed, intelligent, experienced person in the business doesn't have all the right answers, if there even is a right answer.

And the things that stop companies keeping up with the required pace of change, responsiveness, innovation and flexibility is the kind of stuff that happens in meetings.

Whatever we see in meetings is a magnification of what happens in the business outside of meetings.

So if we see people switching off, becoming agitated, deferring to the authority figure in the room, being silent, playing political games, maintaining the façade of consensus we will probably see that happening more subtly outside of meetings.

If the company is slow to make change, meetings will be slow.  And if communication, idea generation and change is poor in meetings, it’s highly unlikely they can be good outside the meeting.

It’s cause and effect.

Most of how we run our companies today is based on a hierarchical model. But the traditional hierarchy is breaking down. Our increasing distrust in authority figures means that people are unlikely to respect decisions made by their boss without consultation. More than that, they might question why they need a boss to make a decision that should be their job to make instead.

But most meetings are structured hierarchically. One person in the room is the most senior and they will make the decision. Everyone else is there to be updated by the decision-maker or to update or influence that decision-maker.

The “winner” is the employee who successfully influences the decision-maker to his side. Attendees who don’t have expertise can’t contribute and so they do their shopping list instead.

All of this is happening underneath the skin of the meeting. Consequently the best solution is not created. The person best placed to make the decision is not identified. Everyone knows that this isn’t the best way but believes such pain to be inevitable.

But what if this set up – which must inevitably fail – was not inevitable? What if meetings were not hierarchical? Could they then become places for discussion, for debate, for building on each other’s ideas, for asking questions and being curious?

In self-managing or less hierarchical organisations each role has clear decision-making responsibilities. It’s not their seniority that gives them the right to decide but their role. They seek advice in order to generate rich ideas, in order to understand the implications of different options and in order to see which solutions create more tensions and which create less.

But they make the final call. And because they have to live with the impacts of their decisions they are more rigorous about getting what they need from meetings. Because everyone around the table has decision-making ownership in their area they engage as fully as they can because they know that next time it will be their topic in focus and they want people to contribute to their thinking.

As long as people believe the most senior person decides, that’s the game they’ll play. How can they take ownership under these circumstances? And we will see this behaviour in meetings because meetings are the business under a microscope.

Assumption 2: If the senior person doesn’t decide, the rest of us must agree

If we bust this first myth we leave ourselves wide open to the second myth, the myth that we need consensus.

If the boss isn’t going to make the final call, who is? Do we all need to agree to make a decision?

There are plenty of meetings like this where discussions go around and around in circles because everyone has to agree before we can move on.

The reality is that you’ll never get everyone to agree on anything once you scratch the surface of a topic. People may agree with a principle like “we should treat our people well” but dig a little and everyone has their own idea about what that means and how to achieve it.

If you take the boss out of the picture you often replace it with a consensus-based model. In the end people pretend to agree just so that they can get their lunch. But why do we need people to agree? If individuals have clear decision-making responsibility they are the decision-maker on that topic.

Meetings are not for committee decision-making.

Having personally experienced meetings where the concept of consensus had been rejected I can tell you it takes some getting used to!

Deep in your bones you want to influence the decision, you want to win the argument. But if it’s not your decision to make it’s irrelevant how strongly you feel about your point of view.

And I can confirm that the decision was made very quickly by the person whose responsibility it was to make the decision and while I didn’t agree with it I acknowledged it was none of my business and didn’t affect me in the slightest.

The third belief we need to bust is the belief that we all know best. Most of us have quite clear opinions. We believe ourselves to be logical thinkers. We believe that knowing is an important attribute, particularly in a leader and that the person who knows best is the most valuable to the company.

Needing to know is dangerous in business in general particularly, as already mentioned, because there are very few right answers these days. But still hardwired in to the business is the belief that we must make the right decision and that knowing what to do is a good thing.

We see this in meetings where we get a lot of debate from people who know a lot. If you don’t know much on the topic you stay quiet as you have nothing to offer. The person with the best argument or who is best at communicating their argument wins. The person who gives up soonest loses.

It’s rare that someone digs a little deeper to what’s really going on or calls out the game playing for what it is. It’s even rare for someone to stop the madness and point out that we’re not getting anywhere.

Knowing is far less valuable to companies today than the ability or willingness to do any of these things. Yes, you can hire a facilitator to help you. But what’s stopping anyone at the table making these observations or asking these questions?

If we accept that there probably isn't a right answer, that no one can really know what to do and that the ability to question, to notice or to assist in a meeting (or elsewhere) is the only way that the best decision can be made then we can make the most of meetings.

Just by questioning these three strongly held beliefs we can re-think how to get more from our time together. You’re giving a day a week to meetings that don’t make a difference to the business. In our busy, busy working lives it makes sense to sort this out right at the source, doesn’t it?