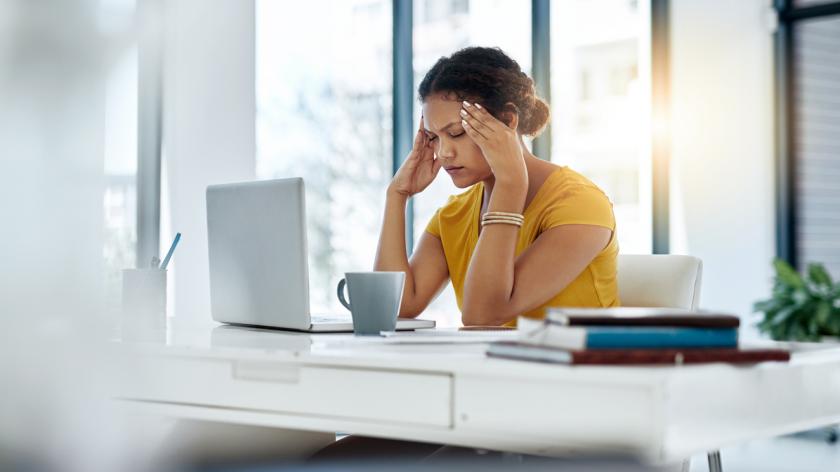 Although migraines are a big contributor towards workplace productivity loss, little is being done to support affected employees with this painful, often disabling, neurological disorder.

Those who suffer from migraines know very well that the experience is not merely just a ‘bad headache’. The grim combination of pain, sickness, and visual and audio disturbances can be extremely debilitating and often impacts day-to-day (social and working) life.

It has also been found to be the first cause of years lived with disability (YLD) worldwide for those aged 15-49 – an age period within which people are commonly working, developing their careers and contributing to the economy.

What is the impact of migraine on socioeconomics?

Considering the above, it’s of little surprise that this neurological disease has been found to have a huge impact on socioeconomic activity.

A new report by the Work Foundation ‘Society’s headache: The socioeconomic impact of migraine’ found that migraines cost the UK economy £8.8 billion per year in lost productivity, which is equivalent to losing 86 million working days. The main causes of this productivity loss are both absenteeism and presenteeism.

Despite these eye-opening statistics, migraines have historically been much neglected.

There’s been little movement in terms of new preventative treatments (although there’s been some recent hope reported for an injectable drug called erenumab), and one study, based on European data, found migraines to be the least publicly funded of all neurological diseases, relative to economic impact (according to the Work Foundation report).

As stress is one potential trigger, and often a common one, it’s again not unlikely for events at work to cause an attack.

Many people today are suffering from migraines without diagnosis or proper treatment, and public and professional understanding of the neurological condition is lacking. Against this current backdrop, businesses have a role to play in improving the welfare of employees with migraine.

Harnessed with improved knowledge, employers can quite easily provide better tools, environments and adjustments to working migraineurs. This will benefit not only those personally affected but also business productivity levels.

Are there different types of migraine?

First it is important to understand that there are several types of migraines that your employees could be suffering from.

Here are a few of the most common:

There are several other, rarer, types of migraine. To find out more information on these visit the Migraine Trust’s ‘Types of Migraine’ page.

What triggers a migraine?

There are many factors that can trigger a migraine. For some, these factors will be easy to identify, for others the triggers may be varied and changing, making it more difficult to prevent migraines through avoiding triggers.

Here are some common triggers:

For employees suffering from migraines who are unsure of their triggers, it is recommended that they keep a diary to identify or eliminate potential factors. Direct them towards this guide on keeping a migraine diary and suggest using a migraine tracker phone app such as Migraine Buddy for ease.

Alongside improving your understanding of migraine, what else can you do to help affected employees within the working environment?

The most important point to consider is that migraines affect people in many different ways. Support and adjustments for migraineurs will vary and need to be tailored towards each individual.

Below is some general guidance on the kinds of adjustments and approaches you may need to make for affected employees.

1. Start with a chat

A good starting point is to have a conversation with the affected employee about their triggers, symptoms and any particular concerns they have. Also ask if they have any suggestions for how they wish to be supported in terms of both preventing and dealing with a migraine attack at work.

As triggers can include bright lights, strong smells and loud sounds, the working environment can be a regular cause for migraine. Common aggravators include LED office lights, screen glare, colleagues wearing strong perfume or aftershave, cleaning product fumes, music and incessant office chatter.

Check if any of these annoyances are potential triggers for the migraineur and adjust where appropriate.

This may involve switching off or changing the lights in a certain part of the office, providing a screen glare protector, making sure nearby colleagues are aware of potential triggers so that they can avoid being the cause of the problem (particularly regarding perfume and noise pollution), and allowing the sufferer to work in a different part of the office or remotely on days where they feel more prone to an attack.

As stress is one potential trigger, and often a common one, it’s again not unlikely for events at work to cause an attack.

Of course, it’s not possible to rid employees of all stress (and in fact a moderate amount of stress is deemed good for productivity at work), but creating a safe environment in which the employee can flag when stress levels are causing harm may be a good strategy.

Bear in mind that after an attack people need time to recover.

You may also want to keep a closer eye on workload, check in about the migraines in regular one-to-one meetings, and agree an action plan for when they experience an attack.

For example, it may be worth providing a dark, quiet space where employees can go when experiencing an attack to rest and take medication before either going home to recover or (if conditions improve) to continue with work later on.

When supporting migraineurs, flexibility really is the best approach. As a migraine sufferer myself, it is a relief to know that my employer and colleagues are happy for me to take time off, work from home, work in a darker room, switch off the lights (or even wear sunglasses in the office!), depending on the severity of the migraine and what I feel I can cope with.

It may also be worth adjusting a person’s hours, or allowing them to work more flexibly around an attack or medical consultations.

Bear in mind that after an attack people need time to recover. The final ‘post-drome’ phase of a migraine is often likened to a hangover. It’s extremely draining and many people experience confusion, moodiness, dizziness and weakness.

Some employees may need further time off to rest, or if they feel comfortable with returning to work, it’s important that they are eased back in and not overwhelmed with a huge task list.