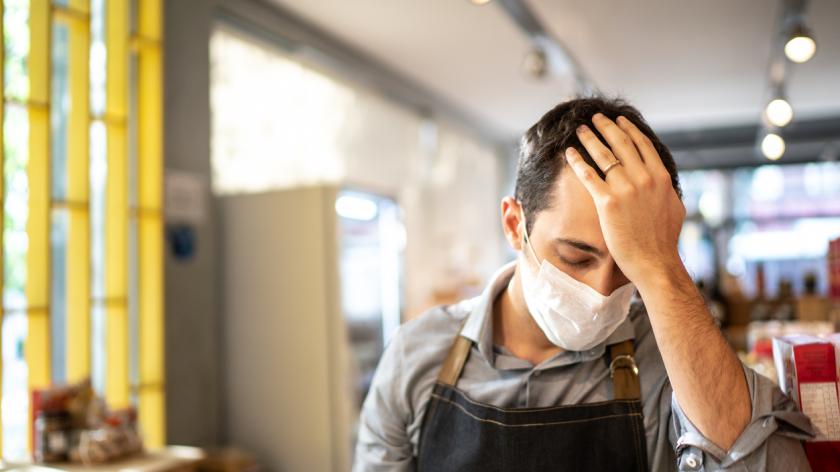 Employee experience: looking after the mental health of customer-facing employees

Customer-facing employees have borne the brunt of all our stress during this pandemic and it’s negatively affecting their mental health. Employers have a responsibility to ensure their wellbeing.

There is no doubt that coronavirus has had a negative impact on every single employee. New evidence is emerging, however, that anxiety about the pandemic, forced lockdowns and uncertainty on when this will end has led to growing frustration, anger and abuse directed at those working in customer service roles. Those employees who have remained on the front line as key workers or those who haven’t had the emotional support of their colleagues while they worked remotely have been suffering the most.

The long-lasting mental health impact the pandemic will have on those customer service employees will be considerable.

One of the things that we knew very early on during lockdown was that forcing people away from their family, friends and colleagues and removing the ways in which they de-stress from life was going to have a significant impact on their mental health. Research conducted in parts of Asia during the SARS epidemic almost 20 years ago showed us that when you lock people down, they start to display symptoms of post-traumatic stress.

While many workers were sent home and others furloughed, key workers were established in industries like retail. Supermarkets, chemists, bike shops etc. all stayed open during the initial lockdown. What's more for some retailers, they became busier than usual and employees were placed under an increasing amount of stress. Worrying evidence is now emerging that as consumers became stressed and frustrated too, employees working in customer facing roles have started to become the focus on these frustrations.

The UK’s largest grocery chain Co-Op reported 133 cases of abuse by customers directed at shop staff in just one day during lockdown. The situation quickly got so bad that new research by USDAW found that one in six retail employees now suffer abuse on a daily basis because of the pandemic. Threats to cough and spit at staff have become a regular feature of being a key worker says the British Retail Consortium. USDAW found that 61% of employees working in retail reported verbal abuse during the pandemic with a third threatened by customers.

The situation has got so bad that some supermarkets (including Co-Op and Waitrose) have had to invest in body cameras to protect shop workers, while others are trying to force the government to take more action. Co-Op Food CEO Jo Whitfield has started a petition for greater protection for retail staff to be written into legislation. MP Chris Evans co-chairs an all-parliamentary group on customer service and is leading calls for the government to mark abuse on retail staff as a specific crime.

The mental health of all customer-facing employees is being tested

It isn’t just retail workers who are suffering – employees working in almost every customer-facing role are suffering increased abuse because of the pandemic. The Financial Ombudsman Service has received an influx of complaints from consumers in the wake of the pandemic - almost 4,000 related to coronavirus. The National Federation of Independent Retailers has seen growing reports of violence among independent retailers and Nationwide Building Society recorded a marked a spike in abuse directed at staff in branches.

The long-lasting mental health impact the pandemic will have on those customer service employees will be considerable. While many were forced to work during the pandemic, juggling their own concerns and anxieties as well as those of their customers, others were made redundant, had wages cut or were furloughed. Employers should not underestimate the strain their customer facing employees have been under this year and the help and support they will require, not only as we enter one of the busiest times of year for retail, but as we put increased pressure on these people to help our businesses and the economy to recover.

Recent studies have found that when customer service employees receive a heighted number of angry or abusive customers, this impacts them psychologically and emotionally. Customer outbursts can be damaging psychologically to employees, and ultimately can contribute to depression and an elevated risk of cardiovascular disease. Other studies have found that even when controlling for other factors that would lead a customer facing worker to resign (like low pay, working hours and working conditions), researchers have found a significant link between customer mistreatment and employee quit rates.

Prior to the pandemic, 38% of retail workers said that their job negatively impacted their mental health in the last year. Since the pandemic started, more than half now say that coronavirus has made this worse. More than 70% of employees say this has been the most stressful period of their careers.

Employers must act fast to support the emotional and financial wellbeing of their staff – particularly those working in retail who have suffered more than most at this time. Finding ways to better support customer facing employees with ways to decompress, relieve stress and protect staff from abusive customers should be high on your employee wellbeing strategy.

Making open, board level commitments to helping your people as well as putting employee wellbeing at the centre of your culture is a great place to start. Employers should commit to asking their people what help and support they need and making sure that the wellbeing of staff is something that involves every area of the business – not just HR. Finding ways to better support your people as they face new challenges in the workplace isn’t just about doing the right thing, it’s about ensuring your business is also prepared for what the next year will bring and the important part your people will play in the success of that. The impact this pandemic will have on your people will affect the customer experience just as much as the employee experience.

Interested in this topic? Read How to nurture the employee experience through continuous change.