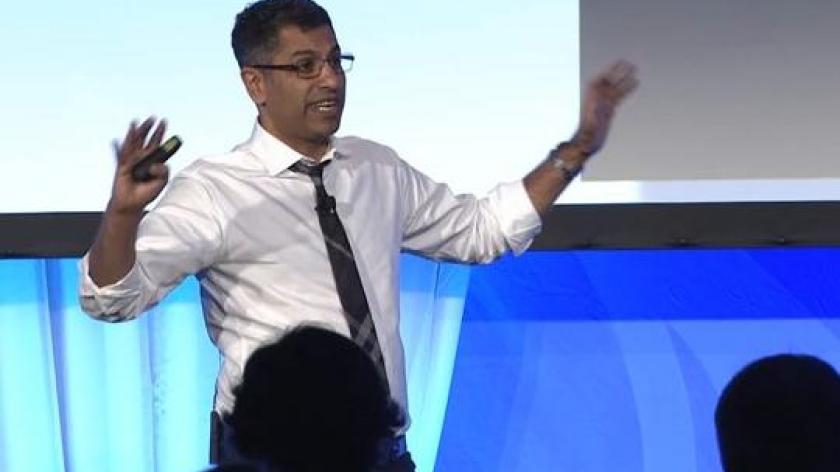 Who is Amar Dhaliwal?

Amar Dhaliwal has been with Saba since May 2005 and was previously co-founder and CTO of THINQ, which was acquired by Saba.

As Saba’s Chief Evangelist, Amar is responsible for brand, product, technology, and client evangelism across the globe. Amar is a member of the Institute of Chartered Accountants of England and Wales, and holds an M.Sc. from the London School of Economics.

You’re Chief Evangelist at Saba and to be an evangelist you need to get behind the company’s vision, purpose and USP. What do you think is the vision and purpose is at Saba?

In the original whitepaper that our founder Bobby Yazdani wrote, he articulated a problem that all companies were going through at the time, which was that organisations of the day existed in a time of great change. This was in the 1990s, so you had the beginnings of the internet, the explosion of technology and lots of restructuring. And he wrote a vision that is relevant today – we still use that as a touchstone as to why we’re relevant and it forms a key part of the reason that we exist.

Ultimately, the change organisations face now is even greater. There was a piece of research done at Oxford in October of last year [2013] saying that 47% of the jobs that exist today won’t exist in the next two decades. That’s incredulous, and if you look at the last two decades, loads of jobs have already gone: toll booth operators, telephone switch operators and ad sales executives to some extent. The pace of change is just accelerating.

And what inspired Bobby to create Saba is actually more relevant today. The organisations that succeed during periods of great change are those that have the greatest ability to adapt, so then we start to think about what makes organisations adaptable.

At Saba we believe these organisations are populated by smart, engaged, happy people. To create this harmony you need to have a certain culture, a belief in diversity, belief in a values system, and there has to be some technology in there too. And that’s the role that we play, and that’s the reason we exist.

You’ve consolidated everything recently into one product, Saba Cloud. Is this the adaptability in play?

There are four or five key technology drivers that we are pushing into Saba Cloud. The first thing – and don’t roll your eyes – we have set ourselves a benchmark of making the product irresistible, so building for engagement, building for end user and building for touch. I’ve heard Josh Bersin and the CIO of IBM using the same term.

Secondly, we’re really focused on making the software intelligent, so really thinking about machine learning and thinking about big data. I know ‘big data’ is the most overused and least understood word in industry, but it’s basically thinking about how can you take all this structured and unstructured content that’s been created and apply tools and analysis to it.

So when Jamie joins company XYZ, we want the company to say, “here’s the training we think you should do based on your profile, who you’re connected with, your aspirations etc.” This can really help drive engagement: we’ve learnt from Netflix and we’ve learnt from Amazon, that if you say “here’s what you should be doing,” people will engage with the system.

Thirdly, really cracking the data problem is important for us and we’re investing a lot in this. As a vendor community, this industry has existed for close to two decades, and overall the industry has done a poor job of providing insight into the data that we gather for HR and talent management professionals. And as a consequence of that I think those professionals have never been had a strategic role in organisations and people just think of them as transactional and not strategic. We’re looking at how we can change the data and how we think about the data so it allows people to ask smart questions.

The last thing we’ve learnt is that over the years, software in our industry has been too difficult to implement and own, so we’re really focused on making that a very graceful, simple, cost-effective relationship. We need to be able to connect with other systems much more easily than we’ve done historically, let people implement in a very agile way and allow clients to get updates silently.

Ultimately then, you’re being HR person first and technology second?

Yep, but I’d give one nuance on this. I spend a lot of time in front of HR people, learning administrators, talent administrators, and I’m apologising all the time, because I’m telling them that we used to build software for them but now we’re building it for end users and line managers.

We used to build it for HR admins and they were happy for a while, but they spent the last decade saying that their people don’t want to use the software, hence why we’re building it for the end user and the line manager.

However, your point is correct in that we are abstracting away the technology and it has to be abstracted away from the end user. But I was talking about this the other day to VPs of Talent and CLOs and I said, “guess what, you’re in the tech business” and I think that the new generation of talent leaders and L&D leaders get that. It’s interesting to see that change starting to happen. Our profession is a soft profession and it’s easy to forget about the technology.

There’s a lot of change happening outside technology too and I think there’s a culture shift happening in HR. So for example Dan Pink, author of Drive, his ideas are picking up a lot of traction as a new way to think about motivation, and the same for Rasmus Ankersen on talent identification.

If you walk into most organisations, let’s take a classic manufacturing company, you walk into HR, or learning, you have an expectation of what it’ll be like, a quiet little corner of the organisation, and you know the conversation will be not terribly engaging, not high energy or inspiring, not driven by innovation, or doing something amazing. In many cases it’s not even strategic. And yet those are the places, you should be walking into them and that should be the biggest buzz in the company.

I think we will get there, but it’ll take time.

Absolutely. And we’re trying to push through change with technology. Until three years ago we were a 100% Blackberry company. People wanted to get iPhones – and this desire was being pushed by individuals, not IT, and IT was saying ‘no, we’re a blackberry company’ and then what happened? People started buying iPhones, and our CEO bought an iPhone, and then IT had to start supporting them.

This was bottom-up, a movement from below, and you need to think about that, about inverting the pyramid, and I think the change will come from the people demanding something different, and they will demand better software, and they will start using the tech they need to use to make themselves successful. It’s a lot faster than top-down change.

And of course that’s a by-product of being in a world where consumer technology is ahead of enterprise technology. I think a lot of HR professionals are behind on enterprise technology. I speak to some who are very up-to-date on the vendors, software developments and some that have no idea what the marketplace is doing. If they don’t know about the vendor landscape and software developments, do they also not know about the increasingly technology-led nature of the function’s development?

I couldn’t agree more, and I also think it’s not only about knowing the vendors. An HR professional has to have a working knowledge of things like what big data, gaming technologies and mobile technologies can do for the workplace. Most people don’t: they think it’s a hands-off, non-technical function, but what I’m thinking is now these people have to be technocrats to make the impact.

And it’s not only about technology in the traditional sense, it’s also about other big changes in the function such as increasingly devolving responsibilities to line managers. A piece of research we’ve just done highlights how important line managers are to engagement and if you don’t understand that, your entire technology implementation could fall down.

Exactly, and that’s why we build for the end user and the line managers.

For HR managers that aren’t tech-savvy, they’re faced with a huge vendor landscape. What tips would you give them for vendor selection?

I was surprised, when you walk around here [CIPD L&D Show], there are so many small LMSes around, so the landscape looks very different depending on where you are. If you’re working for a global, 2,000+ employee company, your vendor landscape isn’t huge, it’s maybe 10 vendors. But as you start to get smaller, it seems you have a much greater choice.

You must be a technologist, but technology for technology sake is pointless. In terms of decision-making criteria, you firstly have to ask if you believe in cloud models or not? That will eliminate a lot of vendors for you. There are certain verticals, such as public sector and government, who say they don’t have the capacity or will to consider cloud, and that changes the vendor landscape for you.

Geographies make a different too. In China, there’s reduced emphasis on the cloud, and in Germany there’s reluctance, based on data privacy concerns and also relationships with their Works Councils.

After all this, when you’re picking a solution, it’s about knowing what you’re trying to solve for, and therefore what products deliver the benefits you need. And quite honestly, most vendors have roughly the same set of features, someone will do something slightly better than someone else, and I think it comes down to saying, who are the people that you have the greatest relationship and rapport with? And all the other stuff – the technology – will take care of itself. But it’s about who has a vision you believe in, who has a customer base you can talk with and be comforted by. Although we do think we have some technology differentiators at the moment, because we’ve had the opportunity to sit back and learn from first-generation cloud vendors.

What are three of the key lessons you’ve learnt in the last year at Saba?

This article is excellent! Amazing!

PLEASE CHECK THIS OUT: