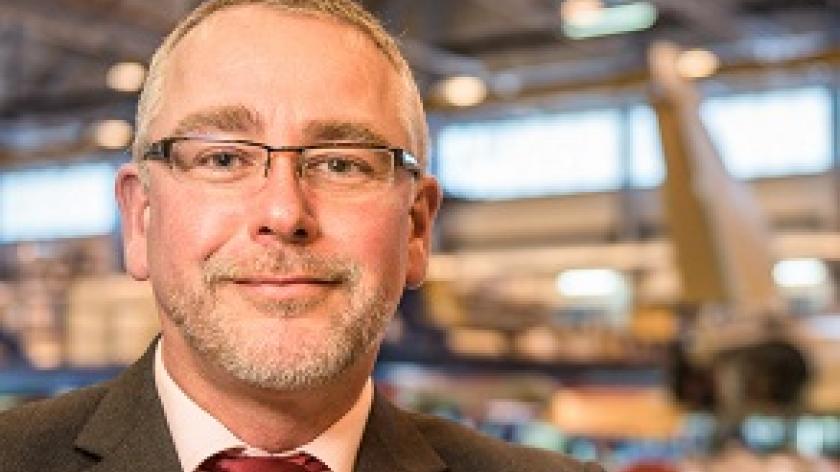 “I started getting interested in HR when I was at university. I thought it would be useful to do a business elective as part of my course and out of naivety thought HR sounded interesting,” remembers Paul Ethell, HR director for BAE Systems’ Combat Aircraft business unit.

Ethell’s hunch proved correct and he did find HR interesting, but he didn’t go straight into the profession from university. Instead, he joined Rank Xerox as a salesman selling desktop publishing and computer systems. He enjoyed the job and was a great introduction to the world of work, even if it wasn’t his dream role.

“Leaving university with a bit of paper and having read a lot of interesting books doesn’t equip you for entering the workplace,” he laughs. “Working in sales was a real test for me. I had to quickly equip myself with skills to be effective and it gave me a bit time to think about what I wanted to do.”

After a couple of years in sales, he began his pursuit of a career in HR and applied for roles in a number of big companies, landing a job in 1990 with British Aerospace, now BAE Systems. He’d only been working there a few months in the North West, when he was asked if he’d like to work on a project down in Bristol - the next morning. So, he set off the next day to work as the sole HR representative for a few hundred staff. “If you are prepared to be that flexible early in your career, it can pay dividends,” he believes.

When he came back a year later, he could have moved straight into an HR generalist role, but instead he chose to take on a position in employee communications. “It gave me a different perspective,” says Ethell. “I feel quite lucky to have spent time thinking out what we’re trying to do and and how to communicate that in relevant messages.”

After a year, Ethell was ready to move back into HR and climb the corporate ladder. His first directorship was of the Saudi Arabian business for many years, which included two periods on site in Riyadh.

“It was fantastic,” he enthuses. “My time in Saudi was a real highlight in my career,” he says. “The Middle East is a beautiful region and very different in many ways.”

It was also turbulent, and he was there during one of the Gulf Wars. On site, there were 28 different nationalities in the Saudi workforce and each expat needed to be paid in their own currency and had different development programmes. But BAE’s vision was to use more and more local people rather than expats and it was Ethell’s role to help deliver that.

“I helped us to become more inclusive in the region and to create the Middle East as a home market,” he explains.
This was a slow process - a lot of the jobs require specialist training that takes time to build up and often required existing expat staff to help pass on their skills. Many of those workers would be leaving the country, so Ethell had to manage their expectations and reassure them that they still had a future in the company at another location. At a local level, the transition meant bringing in more Arabic as the primary communications medium and running development programmes in Arabic.

“We want to be inculcated into local economies and communities, which means being prepared to export intellectual property to those companies and we can all share the benefits,” he says.

From exotic Saudi to the slightly less exotic Farnborough, Ethell’s next move was to become HR director of BAE Shared Services. This unit ran the internal airline to enable workers to be able to commute between global offices, the international insurance business and also HR outsourcing - basically anything that made sense to be a single source of services for the whole company.

This directorship enabled Ethell to become chairman of the internal airline, which basically functioned as a separate business within the organisation. When he joined shared services, Ethell recognised that the recruitment and resourcing model needed addressing. Until then, it had been reliant on outside agencies, but Ethell wanted a more modern approach using direct sourcing and social networking.

“During my time in shared services, a big interest for me was in recruitment and resourcing and to find a more cost effective model of direct resourcing,” he says.

Recruitment was key, particularly in attracting top-notch talent to the Barrow-in-Furness site in the North West and the ability to be able to train them up quickly to respond to market opportunities.

From there, Ethell joined his current role in as HR director of the Combat Aircraft business unit. A key product of this division is the Eurofighter Typhoon military jet, developed by a consortium of European organisations. But sales now need to expand beyond Europe and BAE is transitioning its focus to the export market and working with international customers.

Already, the sultanate of Oman has ordered a number of aircraft and Ethell will be working with the Omanis to supply skilled people to work there while they help local people learn the skills they need. Ethell needs to be able to mobilise the workforce to be able to meet the needs of new contracts.

On a day-to-day basis, Ethell’s goal is to keep people focus on delivering the company vision. “We’re working in an organisation where there’s an awful lot to do and you need to keep people focused - people tend to focus on the tactical rather than the more strategic,” he says.

But maintaining that focus, from an engagement perspective, is easier than for many firms because of the nature of the business.

“I think we’re blessed as a lot of people who work in our business are really passionate about our products and defence and supporting people who are right on the front line. So we don’t see the same dips in morale you may expect in other organisations. For me, we ensure engagement by making sure we properly communicate what it is we’re trying to do and convey it in the right language and enable people to personalise that story and keep communication honest and meaningful.”

Organisational change - what do companies need to think about?

1) Practical needs
You should never underestimate people’s ability to agree a course of action and then be dissuaded from it by the practical needs of the day job.

2) Clarification
If you are trying to clarify a vision and things need to change to align with the vision, you must accept that will be as many different views about what that means as there are people. Individuals can take very different nuances from discussions and if you are serious about creating that coalition you have to keeps talking, arguing, debating until you are absolutely positive that everyone truly understands.

3) Engagement
If you have an airtight vision and change that has to happen never underestimate the importance of really truly engaging people and then to be on their team. The extent to which leaders can convey change in their own personal way and be articulate - we coach leaders to be authentic. Many organisations train authenticity out of you and we almost have to reassure people that their opinions are important.

4) Resilience
I think it’s important to be as adaptable and flexible as possible. You may not have everything right or the environment may change, so you have to be prepared to rethink your plans and to be fleet of foot to meet changes.

5) HR role
Paul Sparrow at Lancaster University said the ‘golden triangle’ of any organisation is the managing director, finance director and HR director, which enables you to have critical influence and make the business vision compelling, but I don’t think that’s necessarily true. I think that the golden triangle should be the managing director, HR director and the strategy director who are the people who must ensure that values are aligned.

Who do you admire most and why?
The person who I think is most influential is my father, who had a corporate career like me. He hated artifice and he taught me the importance of maintaining integrity at all times.

What’s your most hated buzzword?
“Piece” when it’s used in a phrase like “the employee engagement piece”.

What’s the best piece of advice you’ve received?
My father told me: if you have a belief and consider yourself correct, even in the face of opposition, be patient and tolerant and express your view.

How do you relax?
Reading, skiing, looking after my children’s horses and I’ve just learnt to sail.