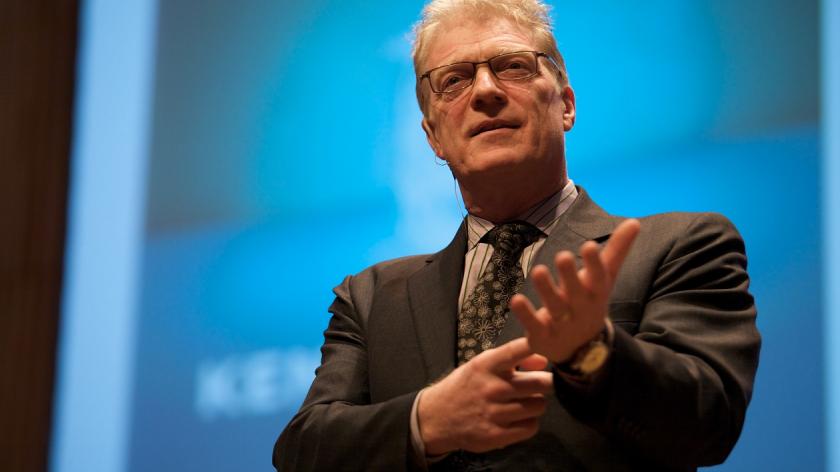 Sir Ken Robinson: “There are processes that are more likely to encourage innovation than not.”

Sir Ken Robinson gave the most viewed TED talk of all time, Do schools kill creativity?. HRZone Managing Editor Jamie Lawrence caught up with Sir Ken at HR Tech World in London, in March 2017, and asked him about creativity in organisations, the role of the human being in future organisations, and more.

“There’s a key difference between natural capacities and abilities.”

One of the reasons people go into organisations feeling not very creative is because they haven’t developed the practical abilities that go along with creativity. It’s one thing to say we have the potential for creativity, it’s another thing entirely to say we can actually do it.

If we want people to contribute more to the culture of innovation in organisations, we must give people the opportunity to develop these skills. It’s not enough just to say ‘well, go on then, come up with a great new idea.’

“There are processes that are more likely to encourage innovation than not.”

I did a lot of work, latterly with Disney, on this. One of the companies Disney owns is Pixar, who have won many awards for their work. They are a very creative company and it’s not accidental: it’s to do with the way they operate. They have a process when they’re pitching new ideas for projects and they call it ‘plussing.’ It’s part of the culture where you can’t say ‘no’ or ‘but.’ It sounds trivial but it’s not.

You have to build on something people have said rather than undercutting it and come up with a better idea. It’s something that happens in improv all the time. These companies are spontaneously generating ideas out the air. You always accept what someone has said and you build on it. If two actors walk into the middle of the stage and one of them says ‘Isn’t this a glorious day at the beach?’ and the other one says “Well, we’re not at the beach, are we?” the whole thing falls down.

So people are more likely to build ideas in certain circumstances when the conditions are right. If companies are highly segmented, with no communication across departments, it’s hard for ideas to flow. If there’s a downward push from the hierarchy that the good stuff happens at the top and new ideas will just cause problems, people start off from a position of not feeling comfortable in developing new ideas because they don’t get a lot of practice at it and they’re not rewarded if they do.

“The average lifespan of a company these days is less than 30 years. The more rigid the hierarchy the more prone companies are to collapse.”

Companies are a bit like human beings in terms of their lifespan. The difference is, companies can be immortal. They can renew themselves, such as Burberry. Hierarchy is not always a bad thing but it’s more likely that companies will continue to renew themselves if there is the flexibility to adapt quickly. People do come and go in organisations.

The people are the organisation so of course HR must be more than a system of benefits and contracts. It must shift to being more strategic. A lot of HR directors are putting in new systems and generating data and putting data into people’s hands. But it doesn’t add up to a culture shift. That’s about empowerment. About a common mission. And the levels of disengagement across most companies is appallingly high.

You’re more likely to get people engaged in the core process of the company if they feel their contribution is essential to the business. It’s interesting to see how this will play out. A lot of jobs will be automated and what we’ll be left with is having to rediscover what it means to be a human being.

“It’s always proved unreliable for people to make predictions about how technology will interact with how people behave.”

But I remember when people started to go digital, 20 or so years ago, in larger numbers, and started using email. People were confidently talking about the coming paperless office. And it just didn’t work out like that. Every room has a printer now. It’s multiplied, actually.

You like to think that in the best circumstances, if we strip away the menial work, it will leave people freer to be human. But that will of course require a cataclysmic shift in the way capitalism operates. Because at the moment it’s all very well to say that everyone can just have a basic wage, but that’s never been an experience that’s ever worked out for humanity. When it comes down to it, capitalism depends on people having the money to buy things.

But there’s no question we need to address this spiritual vacuum people have. By 2020 according to the WHO the second biggest cause of illness and mortality across the world will be depression [PDF]. And this is at a time when people are materially better off than at any other time in human history. And it’s very much because of this that mindfulness and the positive psychology movements are gaining more traction. And why wellbeing is becoming so important.

There are larger challenges we face that are not just economic and environmental - although these are big enough - but cultural in character. We still haven’t learnt to live together. What’s going on?

“By nature I’m an optimist. I’d have packed up years ago if I wasn’t!”

I have a great respect and faith in people wanting to do the right thing, for the most part.

I remember years ago there was a journalist called Bernard Levin who wrote for The Times. He was at a dinner party (and wrote a column about it) and they went round the table and the question was ‘do you think people are good or bad?’ and he was astonished that most people said humans were bad. And his parents went through the Holocaust and yet he didn’t think people were bad at all, that they generally want to do the right things.

Certainly people do bad things, but it doesn’t tend to be the majority. They want to get on, do well by their kids, have a decent life and be fulfilled. They suffer from not knowing quite how to do that and a lot of institutions militate against it. Sadly education doesn’t always help because of individual teachers and because of how the system is calibrated.

I see brilliant examples of innovation everywhere. I think people are very resilient and compassion tends to run deep in most people. So I find plenty to be optimistic about. But I don’t think most people grasp the existential issues we’re dealing with at the moment.

“It was inconceivable until about 15 years ago that someone from his [Trump’s] background and outlook would become the most powerful man on the planet.”

But the genie is out of the bottle now. It’s simplistic to think that Trump, or Brexit, was made possible by some intolerant, racist people who hated foreigners, but it would be a vast underestimation of the forces that made these things possible. Some people in Britain voted for Brexit because they have felt no benefits from globalisation, are living in impoverished estates around the country and feel desperate for change.