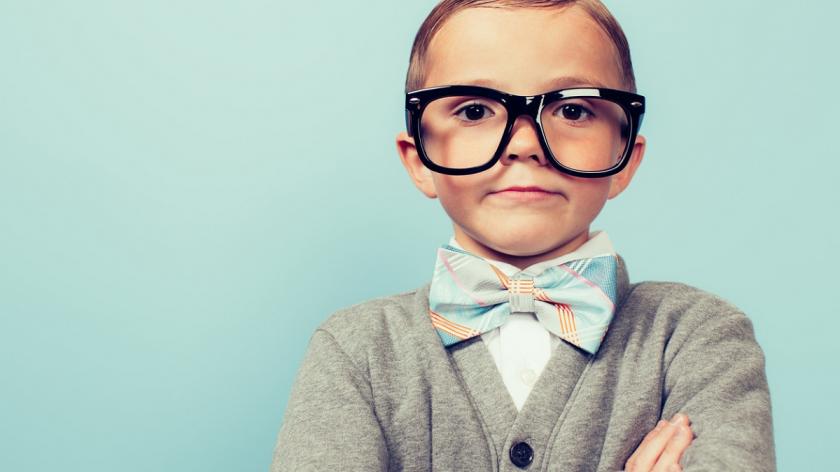 If you want to be a great leader, it pays not to be too smart

It’s no surprise that IQ has long been linked to leadership effectiveness – after all, general intelligence has been shown to enhance people's ability to acquire expertise, solve problems, and communicate thoughts and ideas. So if intelligent leaders are better leaders, it seems sensible to assume that more intelligence will equate to even better leadership.

But for people with a super-high IQ who harbor ambitions of being a successful leader, new research led by John Antonakis, Professor of Organisational Behaviour at HEC Lausanne, the business school at the University of Lausanne, delivers some potentially discouraging news.

Antonakis, with colleagues Robert House from the University of Pennsylvania and Dean Keith Simonton from University of California, Davis, set out to explore the relationship between IQ and perceptions of effective leadership. What they found is that there’s a non-linear relationship between intelligence and the perception of leadership effectiveness.

In other words, being too smart can actually reduce your perceived effectiveness as a leader. Moreover, the gap between the IQ of a leader and the IQ of his or her followers is all-important.

The findings suggest that the optimal gap associated with 'perceived' leadership effectiveness - that is, whether those who are led by the leader think that the leader is effective – shouldn’t exceed 18 IQ points.

So for a group of people of average intelligence (i.e with IQ of about 100) the optimal point for leader intelligence is about 118 IQ points. That’s enough to be considered ‘highly intelligent’, but a long way from ‘superior intelligence’ (an IQ of 130 – 145) or being ‘supremely gifted’ (an IQ above 145).

The higher (or lower) a person's IQ is from that optimal score the less effective the leader is seen by others. That is a problem for very smart leaders, given that becoming (or even appearing) less smart is unlikely to be a practical option.

Being too smart can present difficulties for leaders because while they might be better problem solvers, they fall foul of a ‘comprehension gap’.

A leader who appears too intellectual might seem unrepresentative of the group.

Too large an intelligence gap between leader and followers impairs means that subordinates can struggle to follow their ideas or may find their communication too complex, preventing them from identifying with their leader or perceiving them as effective.

So a leader must be smart enough to lead the group and keep rivals at bay—but not be too smart.

It is not all bad news, though. Importantly, the research was primarily based on perceptions of leadership behavior as rated by others, rather than objective measures of leadership outcomes.

Being super smart may be less of an issue if leaders are predominately task-focused, and where meeting the social and emotional needs of others is less important.

Antonakis stresses that it would be wrong to assume that greater intelligence necessarily reduces actual leadership effectiveness.

If a leader's success is defined by goals that are highly task dependent, as may be the case at CEO level, above-optimal IQ merely has less of a beneficial impact, rather than a negative effect.

For example, other researchers have found that CEOs are, in general, very smart individuals, and are overrepresented in the top 1% of intelligence.

The research findings suggest that the role of individual differences in determining leadership effectiveness merits further consideration as well as pointing to an interesting leadership selection dilemma.

Further down the executive hierarchy attention to the socio-emotional needs of followers is likely to be beneficial to career progression. Yet existing research suggests that a greater degree of task-oriented activity is required at CEO level.

So if selection and advancement to senior levels partly depends on the effectiveness perceptions and ratings of subordinates and peers, will that count against those individuals with above "optimal" IQs that objectively might perform well in task-oriented senior roles?

"Can super smart leaders suffer from too much of a good thing? The curvilinear effect of intelligence on perceived leadership behaviour”, Antonakis, J., House, R. J., & Simonton, D. K. (2017), is published in the latest edition of the Journal of Applied Psychology.

John Antonakis is a Professor of Organisational Behaviour at HEC Lausanne, the business school at the University of Lausanne. He is Editor in Chief of The Leadership Quarterly and an adviser to businesses and governments on leadership development.

He received his Ph.D. from Walden University in Applied Management and Decision...

I have ever heard someone say this to me before! You can't act like you know everything that's going on in your business from the storage to handling customers or to the operations even. If not your subordinates will never feel like they'll be able to take over from you while you keep expanding!

From a general overview, it does make sense that having too high of an IQ might cause a leader to somehow communicate less successfully with its peers with a much lower IQ. This isn't just about due intelligence but it is the frequency level of communication between the two. People having an IQ within a similar range would generally be able to understand one another better.