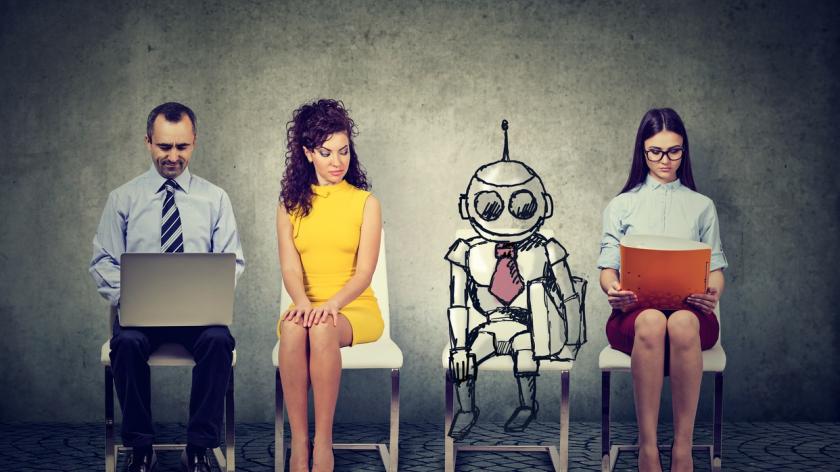 Siphotography/iStock
Robots in the workplace

It’s a common theme in the media. The advancements in automotive technology and machines, whilst vastly enhancing our standards of living have led to the inevitable question of how long humans can stay ahead, and in control of, our creations, particularly when it comes to work.

The present round of media scare stories focus on so-called Artificial Intelligence (AI). I say so-called as this abbreviation has been largely hijacked by the media, and technology marketing departments, as a catch-all term to cover any type of emerging technology which seeks to replace cognitive work now or in the near future.

However, the true definition of AI is the attempt to get computers to do what the human mind can do. In reality, we are finding AI is notably absent from our workplaces globally.

So where is the real action happening?

Together with my co-researcher Mary Lacity, I have examined dozens of major organizations, to uncover the extent to which automation will impact our industries and the roles of human workers in the years to come. Across our numerous studies we have established that it’s the more modest technologies which are set to be the biggest game changers for businesses in the coming years.

A key example is Robotic Process Automation (RPA), which can digest and process structured data by following set rules to produce a correct answer, making it an ideal technology to be applied to data entry and processing roles within an organisation.

In the case of RPA, the necessary technology is, in many cases, now mature enough to be cheaply, easily and non-invasively adopted by organisations. The immediate benefits can include significant costs savings, faster and higher quality processing of data, less room for error and a higher level of regulatory compliance – all of which are music to the ears of CEOs.

However, our research has revealed that there’s often a triple win for shareholders, customers and employees as well.

Currently, we are not seeing RPA being used to replace human workers or causing the large-scale layoffs predicted by many reports and the popular presses though, admittedly, the future looks less secure for outsourcing provider staff on this.

Furthermore, whilst we have not yet seen RPA deployment bring many jobs back onshore, we have not seen RPA replace entire jobs either.

In fact, our research shows that business operations staff have, on the whole, not felt threatened by RPA but instead have embraced it as a solution to a number of pressing work problems.

Instead of reducing the need for humans, RPA and CA may end up transforming the workplace into a more productive and stimulating arena.

As RPA, in our words, “takes the robot out of the human”, it will certainly eradicate many of the tasks currently carried out by humans, but our research shows that this has, so far, been those repetitive, monotonous and largely uninspiring tasks, freeing up human workers to take on more engaging projects which better utilize their human skillsets – for example creativity, innovation and relationship building – that help to drive the company forward.

In practice, the Cognitive Automation market is still quite immature, despite recent heavy investment.

Our studies suggest that more advanced forms of service automation through software moving into more cognitive non-routine work are far less advanced than the current hype leads the casual observer to believe, and will mostly only exist as small-scale, discrete projects within businesses until the back end of 2018.

What is also clear from our research is that these new technologies work best where it is guided by human intelligence. At least for now and the foreseeable future, AI does not have the capacity to deliver the necessary will, imagination and similar intelligence and qualities—no matter how impressive the achievements of DeepMind and IBM’s Watson.

At the same time, our research shows that the introduction of both RPA and CA will also create new jobs and restructure others.

Our own work suggests that, over the next five years around 13 new technical and operational positions will be created for every 20 eliminated. We see most jobs being changed by at least 25%, but very few eliminated over the next decade.

Our research has shown much countervailing evidence against predictions of massive, rapid or long-term job loss. Indeed, most organizations we research are experiencing work intensification and dramatic increases in the work to be done.

They are looking to do more—a lot more—with the same level (or less) of resources as a result of the exponential data explosion, the rise of audit regulation and bureaucracy, and technology creating problems.

Far from taking over, automation will be, most likely just helping us to cope.

Meanwhile, the new human roles are likely to be ones which will offer more day-to-day job satisfaction as they will favour those human skills that robots cannot readily duplicate. Thus, ironically, with more automation, human qualities like empathy, social interaction, specialist knowledge and experience, leadership, imagination, creativity, and teamwork will become even more vital in the workplace.

Experts talk about the need for STEM (science, technical, engineering and math) skills in the future, but there will also be a critical need for the skills that cannot be artificially replicated satisfactorily in the next 20-50.

Our research suggests that organizations need to adopt a strategy that sees technology augmenting, complementing and amplifying human skills rather than replacing them.

The ideal mix will depend on the job level and type.

Automation technologies will enable jobs to be assembled that play to the strengths of humans supported by machines.

These may be at higher levels—big picture analysis and judgmental work—or involve knowledge specialization, or may well involve a combination of skills that really only humans do have.

In this context, perhaps the biggest challenge facing any manager is knowing how to prepare and train their people for this brave new world. Governments, organizations and individuals alike have key roles in education and continuous skill updating. The first step for many is accepting that physical and software robots are here to stay.

The opportunity is there to build a future workplace which is both more productive and more satisfying, and, perhaps, a lot more interesting.

The fundamental question is whether major stakeholders—including governments, managers and technologists—will have the imagination and the will to shape contexts and seize the opportunities as they present themselves. Those who do not take stock and act now will no doubt find themselves rapidly left behind.