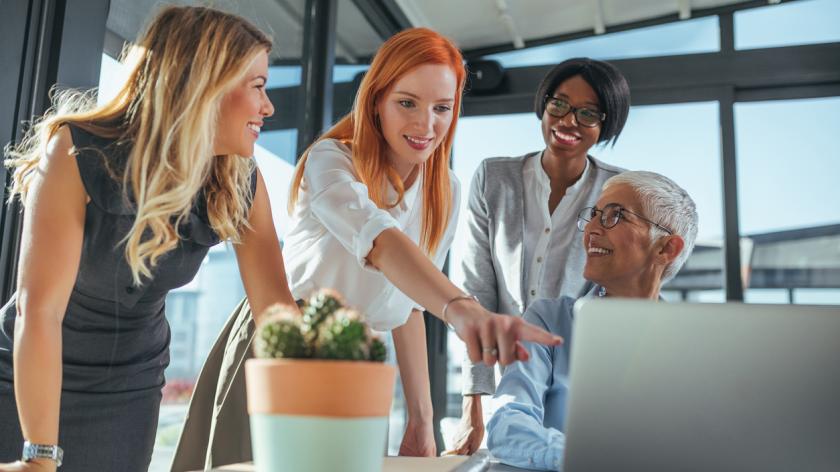 bernardbodo/iStock
women in the workplace

Research shows that women need to feel supported in the workplace to overcome a fear of visibility. But what can organisations do to help women step out from the shadows?

One dilemma for women is managing masculine work norms – being visible, speaking up, demanding a hearing – with female socialisation to be modest, keep quiet and be humble about achievements. Nowhere does this play out more than being visible and drawing attention to achievements.

Past research and our own intuition tells us to be successful you need to be visible. Being visible at work allows employees to demonstrate their skills, be known to decision makers, be assigned to important projects and build relationships across the organisation.

Research confirms our own experience that women’s contributions are systematically overlooked at work.

Research confirms our own experience that women’s contributions are systematically overlooked at work. This limits their career progress and contributes to why there are relatively few CEO's and senior female leaders. Yet when women try to make themselves more visible, they can face backlash for violating expectations about how women should behave.

How women approach the visibility dilemma

A study by the Clayman Institute for Gender Research at Stanford University looked at women's beliefs and strategies about being visible at work. In 2017 we also carried out a survey with women in the workplace and our finding back up the Clayman finding.

Many women instead, opted for “intentional invisibility”, a risk-averse, conflict-avoidant strategy in their organisation.

The women in both studies were aware of the rewards of visibility. They knew that being visible - by speaking up at meetings and taking credit for accomplishments — helps career progression. Still, the studies found many women consciously decided not to be visible or to limit the tactics which would help their visibility.

Many women instead, opted for “intentional invisibility”, a risk-averse, conflict-avoidant strategy in their organisation. The consequence of this approach was that they often ended up feeling well-liked but underappreciated.

Women adopt these strategies for three reasons: to avoid conflict or backlash, to feel authentic at work, and/or to balance professional and personal demands.

Women in the Clayman study worried that violating feminine norms could leave them worse off than the damage invisibility did to their career prospects. Many had personally experienced or witnessed situations where women who acted assertively or authoritatively were penalised. They were aware of this gender bias in the workplace and used intentional invisibility to limit their exposure to it.

Examples we heard in our survey included from a women who spoke passionately at a meeting, in a similar style to the men but was given feedback that she didn’t listen and was too emotional, whilst the men were praised for their passion.

One woman, in our Gender in the Workplace survey told us that “strong women in the workplace still get called names like bitch and ball breaker." Although women recognised this stereotype as unfair, they adapted their behaviour to avoid the label. One woman said “One of my personal learnings the past 35 years is that I have to moderate my very strong personality and strong opinions."

For other women, the Clayman research found being highly visible felt inauthentic and out of character.

In the study most women rejected the executive, self-promoting leadership style and adopted a purpose led collaborative style. They felt masculine type self-promotion was self-serving and inauthentic.

Being less visible helped many women align their personal values and professional demeanour.

They felt staying behind the scenes was more authentic and avoided a backlash for violating feminine norms. In this way, being less visible helped many women align their personal values and professional demeanour.

Again, women in our survey pointed to similar tactics. One woman said "Leadership isn't all about vision and drive. You can lead and also be collaborative and consultative."

Women also believed a more purposeful and collaborative approach was better for the team. The down side of this approach of course, was not all the contributions the women made was recognised.

Women are still responsible for a higher proportion of the child care and household chores. In the Clayman study mothers were more likely than other women to use intentional invisibility to manage their work and home commitments.

Women in our survey said they bore the burden of maintaining family stability by being constantly available to deal with childcare and the logistics of managing the family.

Staying invisible at work gave women more time and energy for home. And just as invisibility minimised conflict with colleagues, it helped women avoid criticism from their partners.

Many women feared or had experienced trouble with their partners if they started valuing ambition or risk-taking in their careers.

Women in our survey said they bore the burden of maintaining family stability by being constantly available to deal with childcare and the logistics of managing the family. To do so, they crafted careers around flexibility and stability while their husbands pursued riskier, and potentially more rewarding careers.

Whilst for some women this compromise is changing - we had examples of partnerships that had planned their careers with a few years of focus for the women and the male partner taking the home focus and then switching.

But several women told us when the children were less of a burden and they could refocus on their career they suffered from age discrimination.

What can you do?

Recognise that if you stand out you also risk the backlash, but the cost of being invisible may be greater in terms of career progression and recognition.

We recommend you do a career audit and pick and choose the best time for you to really focus on career progression. This recognises there may be times you need to hold back and times you can be visible.

It's your choice, just be consistent. Dipping in and out is a recipe for poor performance reviews and disappointments as well as confusing your boss and colleagues. If you are holding back for fear of a backlash try these tactics:

If you are an organisational leader

Women are often advised to stand out if they want to get ahead. But taking on visible roles in the workplace exposes women to risk, and they know it. As long as women are penalised for being visible, the choice to be invisible will continue to be appealing.

Organisations can take these steps to make it easier for women to be seen and promoted:

While it’s easy to urge women to step into the spotlight, doing so without considering visibility’s risks to women is short-sighted. So is treating the problem of visibility as something for women to fix themselves. To achieve workplace equality, we need to redesign organisations — not the women who work in them.