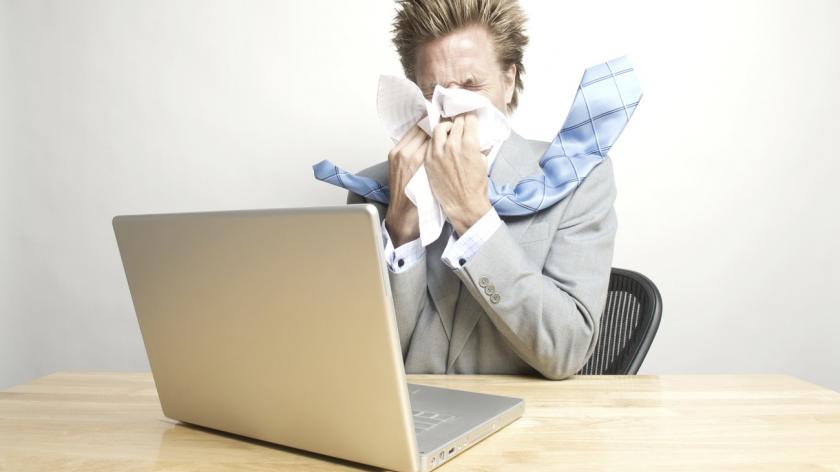 Why do we still go to work when ill?

What is presenteeism and why should we care about it?

Have you ever shown up at work even if you should have taken a sick leave because of your state of health? If the answer is ‘yes’, then you may have experienced presenteeism.

In a sentence, presenteeism refers to the behaviour of attending work when ill (Aronsson, Gustafsson, & Dallner, 2000; Johns, 2010).

As surprising as it may sound, presenteeism has been repeatedly associated, in the aggregate, with much more productivity loss than absenteeism (e.g., Hemp, 2004).

In fact, working when ill can harm the quality and quantity of work, as the employee can be distracted into committing serious errors or safety violations (Niven & Ciborowska, 2015).

Moreover, while absentees are effectively quarantined, presentees might infect an entire office, and this is particularly relevant for the health care and food industries.

Presenteeism can compound the effects of the initial illness with deleterious effects on mental and physical health.

The type of productivity loss depends on the illness

However, productivity loss associated with working while ill can vary according to various circumstances, such as the nature of the health problem and the type of task.

For example, for people suffering from long-term diseases or chronic illness, which are neither debilitating nor contagious (e.g., depression, migraine), presenteeism could be self-affirming and facilitate the gradual reintegration at work and within the society.

Presenteeism is, thus, a complex behaviour leading to various consequences. Understanding its causes can help organisations to manage it, identify the factors that more dangerously harm individuals’ health, and recognise when it can represent a ‘sustainable’ choice for the individual.

So, which are presenteeism’s main causes?

To answer this question, we synthetized the results of 61 existent studies, for a total of 175,960 employees from several countries.

Presenteeism can be trigged by severe organisational policies used to monitor or reduce absenteeism.

Mainly, it is a double path to presenteeism. First, it obviously stems from ill health and stress. Second, it can derive from raised motivation, originating from high job satisfaction.

In other words, if you are highly satisfied and engaged with your job you may spend greater energy and time at work, “go to the extra-mile,” being more inclined to work very intensively and also when sick.

Any sort of high-obligation to work is important here, actually.

Presenteeism can be trigged by severe organisational policies used to monitor or reduce absenteeism, such as strict trigger points for disciplinary actions, a low level of remunerated sick leave, or few absence days available without medical certification.

Difficulty to replace the employee when sick, job insecurity, and personal financial difficulties are other – but less strong – drivers.

Mainly, these are aspects which constrain people from taking a ‘sickie’, because they stress the possible adverse and risky consequences of absenteeism, inducing them to show up ill or to return to work when not totally recovered.

Difficulty to replace the employee when sick, job insecurity, and personal financial difficulties are other – but less strong – drivers of presenteeism.

Being exposed to harassment, abuse, and discrimination could also encourage presenteeism.

At first sight, these findings may sound paradoxical:

However, high job demands require presence to deal with a great volume of work and meet tight timelines.

Furthermore, highly stressful jobs and negative relational experiences at work may exacerbate strain and illness, in turn leading to presenteeism.

What can organisations do?

First, we should make employers aware of the phenomenon and of its costs for individual and organisational wellbeing and productivity in order to discourage the behaviour as well as a culture that reinforces it.

Also, organisations may want to carefully audit attendance policies for features which could decrease absence at the cost of elevated presenteeism, or even to define specific policies to regulate presenteeism (as done for absenteeism).

First, we should make employers aware of presenteeism and of its costs for individual and organisational wellbeing and productivity.

From a preventative perspective, well-designed jobs represents a prime line of defence against the behaviour, by limiting excessive workload, time pressure, and overtime work.

Additionally, workplace wellness and health programmes may be set up to reduce stress and work-related illness, primary causes of going to work sick.

For “minor” illness (as a cold), flexibility could be encouraged and, when the type of task allows it, teleworking could represent a solution. When people can’t afford to take a day off, being in control of their job may help.

Job control may allow them to reduce the work pace or to adjust job activities according to their health conditions (for example, avoiding meetings and focusing on individual tasks to limit contagion).

Moreover, job control is one of the factors which can indirectly discourage presenteeism, because of its boosting effect on health and wellbeing (consequently reducing the need to work when sick).

A challenge for HR management is to seek a balance between absenteeism and presenteeism, and to understand when the latter can be encouraged because of its positive impact on the individual, or when, contrarily, it should be avoided.

Of course, this would depend on several individual and organisational factors, such as the type of illness and work activity, the stage of individual recovery, and the employee’s willingness to return to work.

Also the organisation’s propensity to make specific job adjustments to meet the employee’s needs (e.g., flex time, special equipment) and social support are important. Particularly, helpful colleagues, a trusting relationship with the supervisor, and a supportive organisation can let people talk about their illness, reducing the perception of absence as an unjustified behaviour and facilitating the possibility of being replaced.