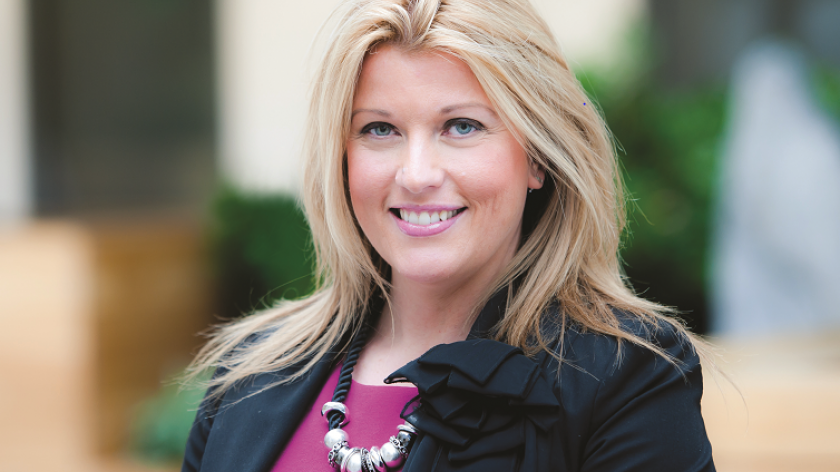 One of the key aims of Leisa Docherty, people services director at Sage UK, is to help staff move “from good to great”.

She believes that career development and encouraging innovation are key to the business applications company’s success and is proud to play her part in creating an environment where staff can flourish.

But Docherty recognised early on that she wanted a job that focused on people. As a result, on leaving school, she went into recruitment, although she quickly made the switch into HR, joining the Automobile Association as an HR administrator when she was 19.   Five or six roles later, Docherty felt that she had a good grounding in HR basics, but she also felt that it was time to move on.

And she knew exactly where she wanted to go. She had handpicked Sage as her company of choice because it was both a big employer in the North East, her home, and also a UK IT success story, with 13,000 employees and six million customers worldwide.   “Sage had a reputation for being a good employer in the region - growing quickly and entrepreneurial,” Docherty explains.

Luckily for her, she spotted an HR manager’s job posted on the company website. She applied for it and got it and has been with the supplier ever since.  Commercial nous  Within two years, Docherty was promoted to head of HR but, from there, became head of HR operations in one of the firm’s divisions. On returning from maternity leave a couple of years ago, she took up the position of head of HR for the whole of the UK but, in November, became people services director.

As to the secret of her success, Docherty believes that it is key for HR people to have close ties with the business and to understand its commercial goals. All of Sage’s HR managers, for example, sit on commercial teams and are viewed as part of those teams. “In every role here, I’ve been part of the commercial leadership team,” she explains.  And being part of that team means that there is scope for HR practitioners to become more than simply observers of the business. “As an HR professional, your role is to look at the impact on people and what it means,” says Docherty, “but there’s also an opportunity to genuinely make a contribution to products and services.”

But being able to make that contribution in her case was also helped by having been a customer of Sage’s products as well. During her time with the vendor, she has implemented a new HR and payroll system, which has given her an invaluable insight into what it is like to be sold to by an IT company.   “So I can relate to lot of customers because I’ve been on that side of the fence,” Docherty says.
Another way that she ensures HR maintains close links with the business is to actively go out and tell people what HR does rather than sit back and wait for staff to contact the department if they have a problem.  Sticking to promises  “We don’t only want HR to be seen as just something disciplinary so you have to be proactive and approachable. You need to be professional but authentic and informal,” Docherty believes.

But the company is also proud of its track record of investing in staff development and one of its key initiatives to this end is holding its own version of BBC TV’s ‘The Apprentice’.

Each team of volunteers, which is sponsored by a member of the executive team, is set a number of challenges. These challenges could include finding a way to raise money for charity, but one or two of them will also be genuine business problems that have an impact on the company.   The two teams that make it through to the final, battle it out in the boardroom where UK chief executive Brendan Flattery plays the role of Sir Alan Sugar and others take on the Nick and Karren Brady roles.

Although hard work, it is also great fun and the prizes are worth competing for – last year, the winning team went on safari to South Africa, and this year, it’s Monte Carlo.

Moreover, says Docherty, values such as fairness, transparency and consistency underpin all of the company’s HR messages, ranging from its approach to pay to career development.   “I think it’s really important for the HR function to really say exactly what we are going to do and do it really well. It may sound simple, but it works,” she explains. “So when some employees asked about reviewing working hours because it was not consistent across business, we looked at it and changed it. We’re doing what we said we would.” And finally...

Who do you admire most and why?
Someone I met last year, David Harper, who is an entrepreneur and very successful businessman and who talks about apprenticeships and getting young people and others back into work. He’s passionate, positive, driven and enthusiastic.

What’s your most hated buzzword?
“Empowerment”. It’s overused and used in the wrong context. I believe in the sentiment, but there’s a fine line between empowerment and abdication.

What’s the best piece of advice you’ve ever received?
Be confident enough to just be authentic and be yourself.

How do you relax?
I have a very hectic life. My three-year-old is the most important thing in my life so I relax by spending time with family and friends.

This is an enjoyable read. The things that really jump out for me are:

Seeing both sides: The importance of connecting what colleagues do with how customers feel.

Career development: Many talk about it - few do it.