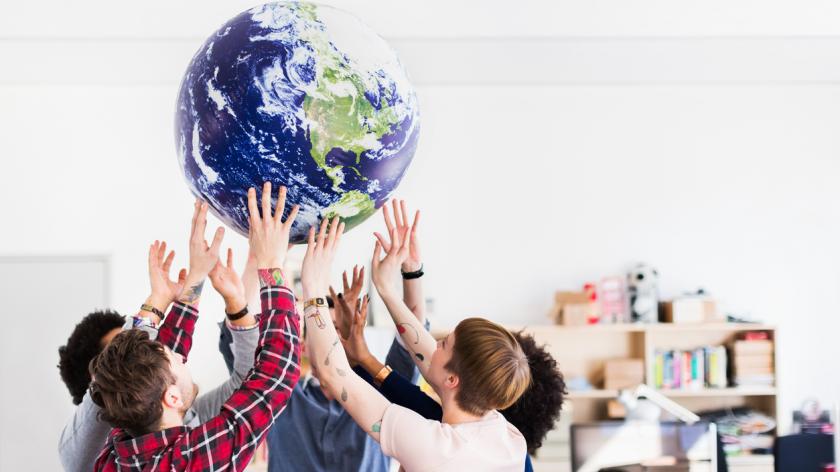 People over profits: the way we do business has to change

Should businesses be socially responsible? In short: yes. We’re already seeing the catastrophic results of what happens when they aren’t – so why aren’t more organisations doing something about it?

What is the business of business? Simply put – is it just to make money? Is there more that business can do and should do? It could be argued that the role of government is to ‘take care’ of the people and it does this, partially, by growing the economy through enabling business to happen, but also taxing business to generate revenue for public spending. It could also be argued that business has nothing to with society other than to buy and sell from society i.e. that is the extent of its relationship with society.

Milton Friedman, the famous economist, proposed that the only social responsibility of business was to maximise profits on behalf of its shareholders to whom management are ultimately accountable and that these profits could be used for charitable purposes should the shareholders deem it fit. Friedman said this back in 1970, 50 years ago, before globalisation and free trade, before the movement of people, goods and services. This was a time before the internet boom and the relentless onslaught of information. Times were simpler.

Businesses acting ethically and being socially responsible is now, more than ever, a competitive advantage in the war for talent, helping them to attract and retain their workforce.

There was an underlying assumption that if business is good, if the economy is growing, there must be a correlation with the good of the country and the good of the individual. The decades that followed were characterised by consumerism with growth in choice from global markets and an on-demand appetite to buy at will and to dispose of at will. Throughout this period many businesses flourished with the changing times, the advances made in technology and communication whilst others floundered and failed, not able to adapt and change to consumer needs. What was the impact on society then?

We now know – the wide use of plastics in everything that has now ended up killing our oceans and destroying the eco systems, mountains of food waste, global warming from our reliance on fossil fuels, climate change from deforestation and carbon emissions, species extinction from unnecessary hunting and forced migration. At a more localised level affecting individuals: broken families, homelessness, knife crime, prisons at bursting points, loneliness, mental health challenges, seeking validation through likes and shares, stretched and under resourced public services. There has been a growing obsession with celebrities, reality TV, binge watching TV shows and gaming, possibly in an attempt to escape the constant news and fake news. There’s now increasing gap between the have and have-nots in the race to the bottom, all in the pursuit of profits, in a world devoid of ethical leadership.

Business as a force for good

The world of work has changed much since 1970, so is Milton Friedman’s statement still valid and relevant? Leadership guru, Simon Sinek’s, book, Start With Why is a perfect reminder to business that there is more to business than money. Sinek refers to the ‘golden circle’, with the outer circle being the ‘what’ in that every organisation on the planet knows what they are doing – namely what are the products and services that they sell. The next inner circle is the ‘how’, and only some organisations know how they are doing what they are doing that makes them special and apart from their competitors. Finally, at the heart of the ‘golden circle’ is the last circle, the ‘why’. Sinek suggests that very few organisations know why they are doing what they doing and it’s never about money. The ‘why’ relates to purpose, cause or belief and is the real reason for the organisation to exist. For me, this is best exemplified in public services such as the NHS that have been run like businesses to reduce costs and find efficiencies, which really is far removed from its purpose of providing care to patients.

For some, the pursuit of wealth has been singular wherein people and planet, which are inexorably linked, are at best ignored or at worst exploited to generate ever-greater profits for corporations.

The CIPD’s purpose is about championing better work and working lives and it believes that business can be a force for good. This would seem to go against the work practices that many have pursued of profits over people. Some businesses have lost their way, as evident from the stories that surface when a tweet goes viral bringing the business into disrepute and potentially costing the business its customers as they choose to go elsewhere.

The truth is that business is not a standalone entity that engages with society to buy and sell goods and services; rather it is part and parcel of society, with its own distinct purpose. It can be a force for good or otherwise. In itself business is not necessarily bad, but when profits take precedence over people then inevitably bad things happen.

The famous quote attributed to a Native American said chillingly, “when the last tree is cut, the last fish is caught, and the last river is polluted; when to breathe the air is sickening, you will realise, too late, that wealth is not in bank accounts and that you can’t eat money”.  This brings home the sad truth that for some, the pursuit of wealth has been singular wherein people and planet, which are inexorably linked, are at best ignored or at worst exploited to generate ever-greater profits for corporations.

The recent wildfires in Australia have underscored once again the impact of climate change, with up to a billion animals perishing in the fire. “This generation is the first that knows people are destroying the environment and the last one that can do something to reverse it,” said WWF UK Chief Executive Tanya Steele.

To conclude, we all have a stake in our welfare, in each other, in our society and our planet so it will take each one of us as individuals, as communities, as businesses and governments to each play their part if we want to address the many ills in society as a whole. We are at our best when we come together with purpose. The bottom line is not profits. The bottom line is humanity and our fragile relationship with our planet.

I agree totally with your sentiments Shakil. We need also to take account of DGC - globally destructive competition and the deeply entrenched beliefs, behaviours that perpetuate it, and limit the extent to which our people and planet efforts can succeed. Check out Simpol (Bunzl & Duffell) endorsed by the likes of Ken Wilbur, Noam Chomsky ...) for a superb explanation of this phenomenon and possible ways forward .... and a necessary context for our people over profit quest