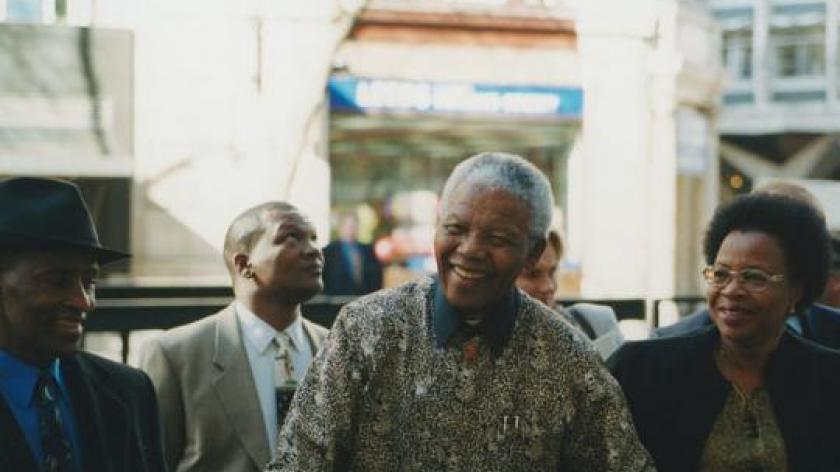 The sad news of Nelson Mandela’s passing came on Thursday 5th November, at about 10pm. As the world responds to the news, we take a look at his life and leadership and ask what lessons we can take away for personal success and leadership from the man who made history as the first black President of South Africa.

Reflections on five of Nelson Mandela’s most famous quotes

Such a topical quote now – the globalised economy requires collaboration for businesses to succeed. Businesses can’t solve all their problems with their own resources. Nowadays firms need to think about benefits to the bigger picture: the local community, the country and – perhaps most importantly – the industry in which the company operates. Working with enemies (competitors) will become the norm – leaders must realise this as soon as possible.

Particularly true when it comes to projects that are ultra-marathons rather than sprints – the pieces never seem to come together until you cross the finish line. That’s when you think back to all the times you thought about giving up and soldiered on – because you remembered the bigger picture.

“After climbing a great hill, one only finds that there are many more hills to climb.”

Many processes in life, in particular self-actualisation and business growth, are treadmills that never turn off. New challenges require new responses – external changes to the business environment, for example, require companies to climb a brand new hill. At the top of that hill, new challenges will emerge. It's a constant process. But it can also be an enjoyable one.

“Education is the most powerful weapon which you can use to change the world.”

L&D professionals will love this one! And, of course, there’s a lot of truth in it. People make the best decisions they can with the resources they have available at the time. Education breaks down boundaries and increases empathy and understanding. Job-specific education helps people become more productive and happier overall – self-improvement is a powerful driver of contentment. And, of course, it helps organisational performance and productivity. Which is great for the company and the country as a whole.

“A good head and a good heart are always a formidable combination.”

I’d like to see this on every job description. What more could an employer want?

What does HR think of Nelson Mandela?

Nelson Mandela and his use of SYMBOLISM

"Nelson Mandela knew how to use symbolism to support and embody ideas which at one stage, were unheard of. From his brightly coloured shirts which spoke of optimism and hope, to the use of the 1996 Rugby World Cup to further unite South Africa, Mandela recognised the importance of creating a dream in more ways than words. He was also a master of the win-win; instead of putting FW de Klerk in the role of dictator, he worked with him instead to make him a conspirator in the dismantling of apartheid in South Africa. However, I think it was his 'essential integrity' which spoke the loudest message of all.” –Karen Drury, Consultant, Maven International

What can we learn from Nelson Mandela about NEUROSCIENCE?

"What I think we can say through the neuroscience lens is that he was definitely brain-savvy. Neuroscience like any discipline that tries to generalise is in danger of categorising people and making them appear a slave to their brain biology. Nelson Mandela is an example of a leader, a human being, who used his brain for good and overcame the natural workings. For example, the threat response is common to all people and he more than most must have experienced it. Most people when threatened withdraw. He embraced the threat and those who created in. He is an example of a leader who managed the threat response and mitigated it for himself and others. If we look at the four CORE brain domains that respond to threat and reward here are some examples of what he did to mitigate threat and activate the reward response.

Most of all he connected to people at a personal level. Even if you have only seen him on film you feel this. He spoke directly to the need for people to connect at a social level. A primary human need." -Jan Hills, founder of Head Heart + Brain.

What can we learn from Nelson Mandela about THE IMPORTANCE OF VISION?

"Mandela continues to inspire because he had an enduring vision of equality that engaged all stakeholders in society, eventually including the oppressive regime that incarcerated him for 27 years. He was relentless and unwavering in his pursuit of his vision even when serving a life sentence. This vision was so powerful that his supporters were able to keep it alive while he was in prison - they were fully behind it. When he was released, within a very short period he ended 300 years of politically enforced inequality, and was elected by those who shared his vision to become the first black South African President. This shows the unity and achievements that can arise from a clear vision, and a leader who holds an unshakeable belief in that vision." -David Klaasen, Inspired Working

What can we learn from Nelson Mandela about TRUST?

"As a leader Mandela often polarised opinions as sharply as the black and white divide he ended. Some said too trusting, others said his trust of others was his greatest strength. But whether leading a nation, business or small team, Mandela is the perfect and quite humbling example of what takes to make a great leader. Mandela knew instinctively what many people fail to learn either through years of experience or expensive management courses (which in our experience very rarely address the key issues). It’s simple. Leaders inspire others to follow. People will only follow if they trust. Trust needs to be earned, built on, nurtured. Get your employees to trust you, and they too will follow.’"

It's one of the most difficult things, getting people who doubt you, disrespect you, to trust you. Mandela’s enemies were responsible for his incarceration. But on his release he famously included his jailers among his friends and put leaders who had put him in prison in his first Cabinet as President. Why? Because he knew that true leadership was about convincing those who doubt you that you can be trusted (it also meant they were where he could keep an eye on them!). This was no blind trust like followers slavishly following a cult leader with often tragic results, but trust that was built on respect, credibility, honesty and transparency." -Tom O'Byrne, CEO, Great Place to Work

What can we learn from Mandela about TRANSFORMATIONAL LEADERSHIP?

"The main lesson we can learn from Nelson Mandela’s life is that it takes more than a single heroic leader at the top to change the trajectory of a nation. To transform a nation (or any large enterprise for that matter), inspiring leaders are needed at every level to accept absolute personal responsibility for transforming themselves, their work, their community and the Nation. Transformation comes from leaders driven by a purpose beyond politics, profits and self-interest, able to inspire collaborative action based upon collective wisdom. Great leaders create great leaders.” -Brian Bacon, Chairman and Founder, Oxford Leadership Academy