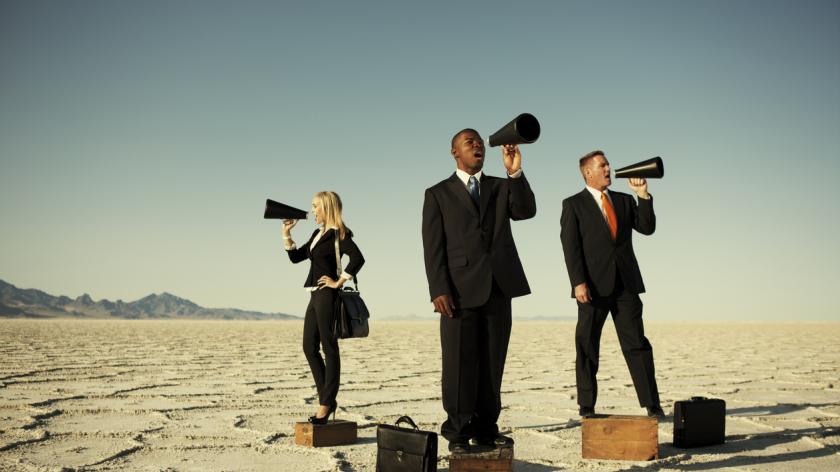 Mastering the art of speaking up: why labels matter

In part four of a new content series on speaking the truth to power, Megan Reitz and John Higgins, co-authors of 'Speak up', explore the assumptions that block our ability to speak or to listen in the workplace.

In the workplace, and in life generally, we dole out titles and labels to ourselves and others all the time, to do with gender, race, specialism, age, job title, sexuality, appearance. These titles convey or diminish status and authority depending on the context we are in. The label ‘HR’ might in one organisation communicate ‘strategic importance’, but in another ‘admin’. ‘Young’ and ‘woman’ combined together, as Megan found out in her 20s, doesn’t generally scream ‘status and authority’ in the boardroom.

Dominant groups remain largely unable to look at how they shape the world to their own advantage - they suffer from ‘advantage blindness’.

Labels and titles matter because it is through them that we form assumptions relating to the right to speak up and the right to be heard.

There is a fantasy in play at work, especially at the most senior levels of organisations where claims are often proudly made of ‘flat hierarchies’ and ‘shared leadership’, that we are able to escape from our habits of labelling people and therefore everyone is equal. In our most recent investigation of our survey results, not a single one of the 115 board or executive committee level respondents reported that they are usually or always influenced by someone’s gender or ethnicity when listening up. They are therefore probably the most ‘woke’ group of leaders we have ever come across. Unconscious bias is non-existent…or perhaps not.

Something else is going on. Early on in our research into speaking truth to power we were testing out some emerging hypotheses with people as they went about their ordinary working lives. We asked one group how much they were influenced by age, gender and ethnicity in their recruiting – the organisation was noticeably homogenously white. We were met with fury: how dare we suggest they were prejudiced! After all it was illegal, so how could their recruitment and those who did it be biased?

We need to learn to step back and let in those voices which have been traditionally marginalised, without falling into defensive routines when we hear experiences that don’t fit with our own.

There is a pattern here. We have backed ourselves into a difficult corner, relying on zero-tolerance policies and the full weight of legislative requirement – and so making it impossible for people to admit to being influenced by the accidents of their history, which means that whether they mean to or not they are not attuned to their biases. Meanwhile, the gender pay gap is only changing very slowly and the ranks of senior leaders remain snowy white and largely male.

Dominant groups remain largely unable to look at how they shape the world to their own advantage - they suffer from ‘advantage blindness’, as our colleague Ben Fuchs puts it. You don’t notice the power of titles until you don’t have the ‘right’ ones – but this is not an easy discussion to open.

We cannot escape labelling others and being labelled by them in turn – and these labels greatly influence who and what gets heard. The challenge is how to turn towards the often difficult conversation that needs to take place if we want our organisations to have inclusive speak-up cultures, rather than exclusive ones.

For those of us that have titles that mean we are more readily heard, we need to learn to step back and let in those voices which have been traditionally marginalised, without falling into defensive routines when we hear experiences that don’t fit with our own.

In our final article in this series, we will investigate the ‘how to’ of speaking and listening up.