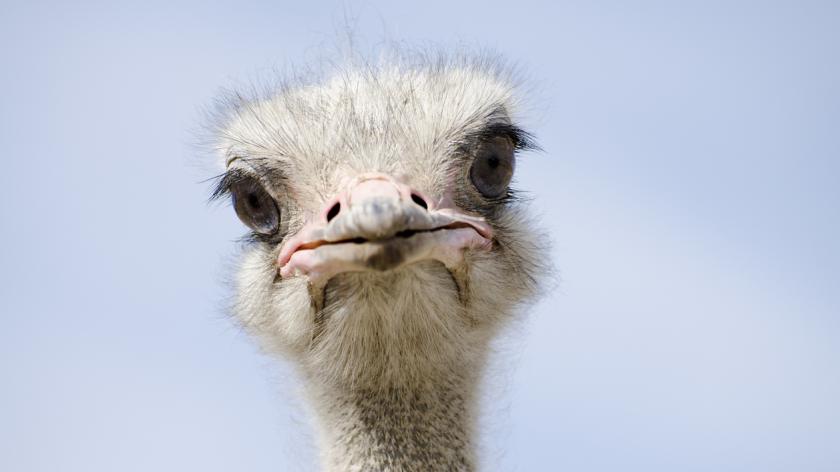 Is the Ostrich Effect impacting your organisation?

What is the Ostrich Effect: why it’s so harmful to organisations, and how can HR spot and tackle ‘ostrich-like’ behaviours across a company?

The clue’s in the name; the Ostrich Effect is essentially when, to ignore a problem, someone chooses to metaphorically stick their head in the sand and hope the problem will just disappear. But what usually happens is the exact opposite…

This ostrich-like behaviour (also often referred to as Ostrich Syndrome) is a cognitive bias: a bias where someone is avoiding negative information by closing themselves off from it.

We can all choose to avoid issues temporarily if we don’t feel like we have the capacity to deal with them straight away. Sometimes we delay tackling issues simply because we haven’t got the emotional resources at that moment in time, and we know that we will be able to deal with it more effectively if we revisit it at some point in the near future.

The Ostrich Effect, however, involves avoidance of negative information, typically some kind of problem or feedback, on an ongoing basis.

Sometimes it’s a conscious deliberate choice. It's ‘avoidance coping’  reducing the uncomfortable feelings we might otherwise have to deal with by facing reality. In the short term, it can certainly feel a lot more comfortable to look away from an issue than to have to confront it. For some people it’s not necessarily a conscious choice either - it could be because of a blind spot they have: confidence that their perspective is always the right perspective perhaps and a misplaced certainty in their own ability to spot genuine problems.

Either way though, that almost inevitably means opportunities to address the issue are missed – and the issue starts turning into a far greater problem…

Why is the Ostrich Effect so harmful to organisations?

You don’t need me to point out that this kind of behaviour can potentially be disastrous at the very top of an organisation. If senior leadership doesn’t face issues and challenges properly, there’s real potential for serious, damaging consequences.

But the Ostrich Effect can be every bit as harmful if it’s affecting the behaviour that’s going on throughout the rest of your organisation too.

Think about the employee who is witnessing poor practice and knows that they should call it out, but chooses to look away, telling themselves it’ll resolve itself eventually. Think about the manager who can see early signs of conflict between people in their team but does nothing to address it. Or the colleague who can see that the way another colleague is acting towards a customer could start to become detrimental to the reputation of the company… but cannot face being the one who raises it.

While creating this kind of culture will take time, there are many ways it can be nurtured

How can you recognise the Ostrich Effect in your own organisation?

What could indicate that the Ostrich Effect is having an impact on your organisation? Often it manifests itself in a general ‘avoidance’ culture throughout leaders’ and managers’ behaviours. There’s unease about trying to shift the status quo. Uncomfortable conversations are avoided; rather than being addressed quickly and effectively, performance issues are swept under the carpet and business challenges that need to be faced up to, either short or long term, are down-played.

Throughout the organisation, there are often many negative undertones – people sense the real challenges are not being tackled. It’s unsettling and can feel unfair too if employees are seeing evidence of double standards as a result of it.

Once you’re aware of the potential impact of the Ostrich Effect on behaviour, it puts you in a position to consider what can be done to address it. Remember what lies at the heart of it. It stems from people consciously or unconsciously avoiding reality.

So it follows that a lack of open, honest and constructive feedback fuels those types of behaviours - and one of the best ways to address that is to build a culture on a foundation of feedback.

While creating this kind of culture will take time, there are many ways it can be nurtured, both at the individual level and across an organisation as a whole by giving leaders, managers and employees the right tools and skills to enable them to change their behaviour.

There are several ways that feedback can be given and received, both formally and less formally, in the moment.

Across an organisation, that can take the form of 360-degree feedback, and other performance approaches that encourage regular, honest conversations. Coaching helps in a number of ways. It encourages people to get into the habit of giving and receiving feedback regularly.

It can be used to help someone look at how they respond to feedback: understanding, for example, if it’s triggering a defensive response, or where their blind spots might be, and what they can do to overcome ostrich-like behaviours and biases.

Coaching enables people to acknowledge and think through what their worries and limiting beliefs might be that are dissuading them from dealing with an issue - and then identify the small steps they need to take to move forwards towards resolving it.

Not only does coaching raise someone’s awareness of any tendencies to avoid issues in themselves… but it also helps them to recognise those tendencies in others too and know how to respond to them.

Are people burying their heads in the sand in your organisation?

So what’s your culture like? Open, transparent and driven by feedback? Or is the irony that in your organisation, people are tending to collectively look away from those ostrich-like behaviours… in which case, it’s time to start thinking about the small steps that need to happen to overcome that – and soon.

Interested in this topic? Read Overlooked and undervalued: why quiet leadership could be the answer to your culture.