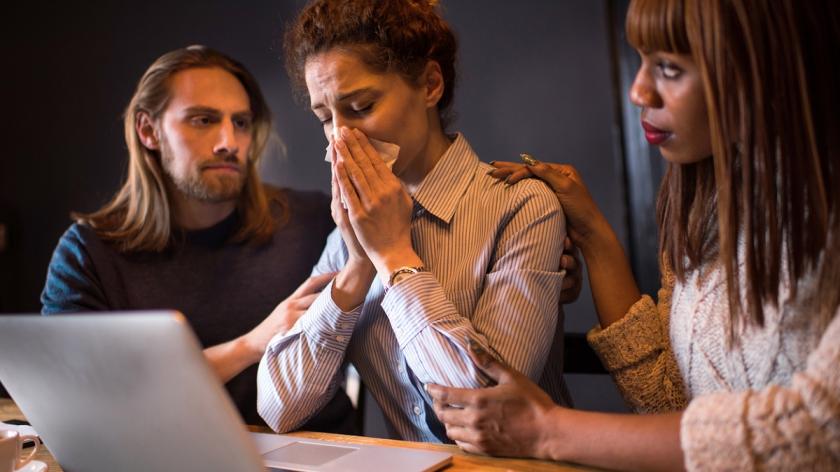 The workplace is considered a place of rationality, where emotional behaviour, particularly crying, is seen as inappropriate or even shameful. Crying at work about personal tragedies may be tolerated, especially by close colleagues, but becoming tearful over everyday events, such as arguments or workload pressure, tends to be viewed more negatively.

Unfortunately these are the types of events that are most likely to lead to tearfulness.

Women cry more than men in response to most emotionally intense situations.

A recent survey found that 41% of women admitted to crying at work in the previous year, whereas only 9% of men had done so.

Nonetheless, research shows that we have more positive and forgiving attitudes towards crying men than women.

As men are generally considered stronger and more emotionally controlled, crying is a sign that something very serious must be wrong. When women cry they confirm the widely-held view that they are more emotionally weak. Interestingly, both sexes see women as more likely than men to use tears to manipulate others in order to get their own way.

We interviewed 59 women from a wide range of jobs from the education, health and social care and customer service sectors, as well as those working in traditionally ‘male-dominated’ jobs such as industry and the emergency services.

All of the women we spoke to had cried about a work event or situation – but not all had done so in public. Some managed to control themselves at the time, but broke down when they got home.

Women had cried about stressful life events, such as bereavement and relationship break-ups, as well as traumatic incidents related to work, such as redundancy and aggression from managers, colleagues or members of the public.

They also reported crying in response to positive events, such as a promotion, praise from their manager, or expressions of gratitude from a service user or customer.

Overwhelmingly, however, we found that women cry when they feel frustrated, disappointed and angry.

Most incidents that caused tearfulness involve feelings of powerless and injustice, for example where somebody else takes credit for their work, or if they are unfairly criticised.

Recent research has found that women find it difficult to express anger at work, even when it is well justified.

Women who react with anger are judged much more negatively than men, who can see such behaviour as a necessary and effective management tool.  An angry man is generally thought by others to be more competent and to deserve more status and a higher salary than an angry woman.

We found that women also cry at work when they feel emotionally overwhelmed – this is often the ‘last straw’, where a seemingly trivial incident leads them to break down due to an accumulation of stress.

When this occurs, the women we interviewed expressed concern that the reason for their tears is misunderstood and they are considered emotionally weak.

Women who work in ‘caring’ jobs, such as social work or nursing, often cry in response to the emotional demands of the role, for example when a patient dies.

Those in customer service roles also become tearful as they are unable to retaliate when subjected to verbal abuse, derogatory remarks and rudeness by members of the public.  Although such treatment is generally considered part of the job, it is nonetheless emotionally demanding.

Our research shows that women typically feel shame and embarrassment when they cry at work.

They believe that colleagues consider them weak and unprofessional and they often see themselves as a ‘traitor’ to their sex by confirming the stereotype that women are ‘ruled by their hormones’ and unable to control their feelings.

Nonetheless, the women we interviewed were considerably more sympathetic towards other people who cry at work than themselves.

Our interviewees also recognised that crying can be beneficial, as it is emotionally cathartic and makes people more ‘human’. It can increase the bond between team members and resolve issues that may have been festering for some time.

The consequences of crying at work depend on how the situation was managed.

We found that breaking down in a private space with trusted colleagues is infinitely preferable to becoming tearful in public, particularly in front of clients or customers.

The perceived impact of crying also depends on the working environment and culture.  It tends to be viewed more positively in workplaces and teams that are female-dominated and characterised by mutual empathy and trust and more negatively in traditionally ‘masculine’ cultures.

There is no clear protocol for how to manage tearfulness in the workplace.

Managers often struggle when staff express extreme emotion, usually because they don’t know how to react. They may be embarrassed and withdraw from the situation, or respond to a crying employee like a tearful child - with physical reassurance such as pats or hugs.

Clearly, the appropriate response to tears depends on your relationship, how long you have known them and the organisational culture.

Nonetheless, the issue needs to be addressed and some support is required.  Try not to be judgemental and resist making assumptions about the ‘real’ causes of the tears.

Give people time to recover and encourage an open and honest conversation where confidences and fears can be shared.

Help your employee to make a specific plan and then follow this up. Training in emotional intelligence can be useful as it can help people gain insight into how to respond to the emotions of others, as well as help them manage their own feelings more effectively.

All of us need to understand and accept that crying has a purpose. It is a sign of strength, not weakness. When you cry you get rid of feelings that make it difficult to think clearly and act powerfully. If you are with someone who feels safe enough to cry then don't interfere just be present and supportive. You are doing a great job!