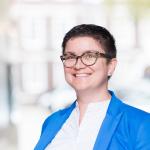 Coming out as nonbinary at work

Do your nonbinary employees feel excluded? Coming out as nonbinary at work

Lior Locher, a coach, author and learning consultant with NIIT, shares their personal experience of coming out as nonbinary at work. They also share some useful guidance for anyone who may wish to come out as nonbinary in the future.

In recent years, a lot more people have been coming out as nonbinary, and more countries and states have added third gender options. But being nonbinary is still often not widely understood or taken seriously as a gender identity in its own right. There are few role models outside of show business and the lack of visibility can make it more difficult to relate to. Being nonbinary comes with its own challenges in life and at work, and there are lots of misconceptions and assumptions.

What does nonbinary mean?

Nonbinary is one of the ways to describe a gender identity that is not male or female. This could mean identifying as both, or as neither, or rejecting the male-female binary outright and identifying differently.

It feels much better to live your life as your whole self.

My journey to being fully open about being nonbinary happened in stages. I had my first gender conversation at age four or five in kindergarten (it was a Catholic kindergarten in rural Southern Germany – that conversation did not go well). Puberty was a disappointment as I had secretly been hoping I’d turn into who I was meant to be, and that wasn’t female. I then pushed that topic away as I got on with education and with trying to build a life, a viable career and as I went on to live abroad.

The gender identity topic came up again while working in the US in my early 30s. My employer at the time introduced support for gender reassignment so that restarted my inner search process. I ended up deciding not to transition, as I realised my ideal place is genuinely in-between (or neither).

I had a minor existential crisis when a theatre in New York sent a user survey that had 10 options for gender. I spent an enlightening and confusing evening googling what all those were and how each would feel. Nonbinary immediately resonated. I was out as being bisexual at work but didn’t dare to be out with my gender identity at the time quite yet.

Coming out at work

Coming out as nonbinary at work has been a very mixed journey, I was always very cautious but not cautious enough, and I’m still paying for the damages, literally and figuratively.

Until recently I kept a low profile. I then joined a company that prided itself on authenticity, so I was out and proud from day one. It was a complete and utter disaster. I ended up being brutally bullied out of my job and lost nearly everything as a result.

I then went back into the closet for a few years to rebuild my life and career, pretty much from scratch. For my second attempt, I waited until I was stable and successful enough in my current role before venturing out again. My employer and clients are very supportive, and that is a big relief. When I asked to be referred to with my new name ‘Lior’ it was a very positive experience. I can mostly be who I am right now.

The battle for official status

While I’m out at work about my identity, living as nonbinary officially is basically impossible. As a global professional, you deal with lots of paperwork, usually involving at least two countries, and all of them have different views on gender and what is or isn’t possible, and under which circumstances.

While Germany (where I was born) now recognises a third gender option and allows for name change if you change your religion (which I did), the bureaucratic process is so prohibitive and so staggeringly expensive that I am realistically not going to be able to see this through. This breaks my heart.

Even if I could, I would then still run into problems with every other country I’d be dealing with, or whenever I fill out a form with just male/female options. If your life or work stretches beyond the country you were born in, this is still impossible to navigate – not to mention the security situation this will put you in in some parts of the world.

On paper, I will have to keep pretending I’m female and my dead name (my former name) still needs to be put everywhere officially, which is painful and infuriating each time.

How to be open about your nonbinary identity at work

If you are nonbinary and are considering coming out, I hope you can learn from my experiences. Here’s a few things to keep in mind before you take the leap:

Make sure you are in good standing where you currently work. Stabilise your finances and invest in your professional network as much as you can. Find a community that can hold you. Know what legal and other support you have available, and document everything. This is unfortunately still a risky step to take. If things go wrong, the road to recovery is long and often lonely.

It feels much better to live your life as your whole self. People love ‘interesting’ stories so they might push you to do things you aren’t comfortable with yet. It’s not your job to provide others with juicy stories.

On the other hand, sometimes we have to be the elders we wished we had when we were young, and that will massively stretch our comfort zone. Sharing stories can be a part of that. You decide what you do and at what pace.

You might have to do a lot of education. Most people aren’t deliberately mean. This is still new for lots of people so they can be a bit clueless. There are not enough relatable role models outside of showbusiness yet, so the more other nonbinary folks come into the conversation, the better.

4. Coming out loudly versus quietly

There is also a sizing question. People either come out very quietly, or very loudly. Oddly enough, I found louder to be safer. After my first quiet coming out went so horribly wrong, I made the second one loud – I came out by running two sessions at two global conferences.

That is a brutally stressful way of doing it so I wouldn’t necessarily recommend that. The support in the L&D community was fantastic, and that gave me the extra protection I felt I needed to take this further and do more public things like changing the name I use.

I hope my story raises awareness of gender diversity and helps other nonbinary people, whereever you are on your journey. If you're a nonbinary person within L&D or elsewhere, please get in touch so we can all connect and start building a community!

In my second article, I explore what businesses can do to make their culture and environment more inclusive for nonbinary people.

Lior Locher is a Learning Consultant with NIIT and also runs their own coaching business supporting individuals and start-ups. Before becoming a consultant, Lior headed up various parts of L&D and change initiatives in global organizations. Lior has published two books. Fellow of the RSA and the Learning and Performance Institute,...