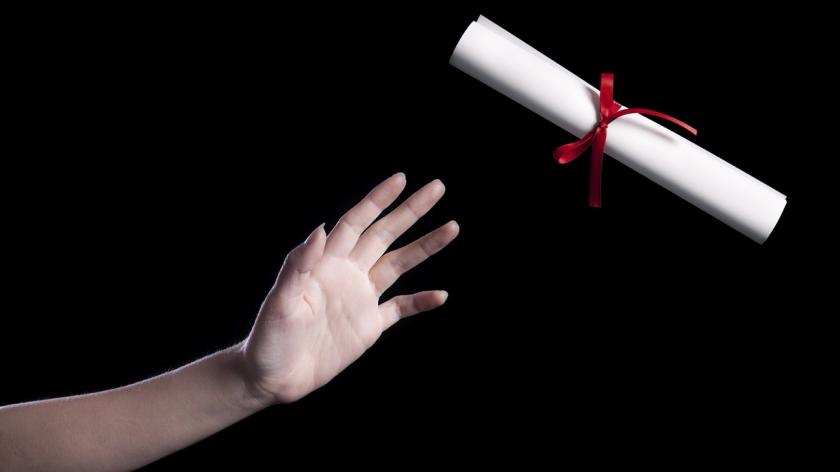 Have degrees had their day?

Once upon a time a degree used to be a rite of passage into a great job for University graduates, but with accountancy firm Ernst and Young, and now publishers Penguin Random House dropping the degree requirement, it's time to ask if degrees have finally had their day.

This could be the best news ever for cash-strapped debt-ridden students who’ve jumped on the bandwagon that to be a success you must have a degree. I’ll hold my hands up from the start, I don’t have a degree.

"Did the degree ensure their success or was it their talent?"

I left school with a good set of GCSEs and a clear determination to do well, and I think most of my peers would consider I’ve done all right.

I do work alongside many professionals that do have degrees and it’s clear we’ve all benefited from the experiences we’ve been through to get where we are today, but did the degree ensure their success, or did their own drive and talent elevate them up the career ladder?

Recently Penguin Random House made headline news when they announced that they were dropping the degree requirement.

Their HR director, Neil Morrison, said: “Growing evidence shows there is no simple correlation between having a degree and future professional success.”

He continued: “We want to attract the best people to help grow and shape the future of our company, regardless of background – and that means that we need to think and act differently. Simply, if you’re talented and you have potential, we want to hear from you. This is the starting point for our concerted action to make publishing far, far more inclusive than it has been to date. Now, we need to be more visible to talented people across the UK.”

Penguin also made it clear that graduates could still apply but they were more interested in the individual and what they could do rather than what college they’ve attended or what grades they’ve got.

Last summer Ernst and Young, one of Britain’s biggest graduate recruiters, stated that it would no longer consider A level or degree results when assessing potential employees.

Let’s face it: we’ve all had new recruits in the office armed with a top degree but within minutes you’ve known that they don’t have the necessary skills to make it happen, or are too full of their boots and think they know everything (theoretically) but struggle to put this into practise.

Naturally there are some vocations where a degree will always be a prerequisite, such as doctors and lawyers etc, but do we really need a degree in History of Art to be a great business person?

How does this shake-up the recruitment process?

I think it’s a great opportunity to throw away the ‘rule book’ and get real talent into areas where they can excel. We held a straw poll in our office looking at what our graduates had got out of their experiences. For them the main benefits were:

They felt that these skills translated onto a tip top CV which would help show organisation skills, critical thinking, communication/influencing skills and team work - strengths sought by all employers.

It was also interesting to note that team members who had spent four years on a Business Studies degree course found their year in industry the most valuable.

Education - just not at 'degree' time

On the other hand our straw poll in the office found that those without degrees were certainly not against them, and many had gone back to education throughout their careers to reach a very high level of education supported by their employer.

Some concluded that it wasn’t just businesses looking for degrees from its employees but there was a pressure from chartered bodies to ensure its members had them.

In this era of University tuition fees and the absence of mainstream grants it would be a very positive move for industry to further support youngsters with apprenticeships that also offer degrees or suitable training, as a real alternative to the University route.

So it would seem a good time to brush up on our CVs and take a look at what we do to make us stand out from the crowd.

Time to start looking at your USPs - regardless of degree

Out of hours I’m a dad to three little ones and I also take part in championship table tennis.

These attributes of juggling, competition, practise and team work really do help me in the workplace.

I can also empathise with others who have small children and be more open-minded to employees’ wants and needs. I know from previous employers that playing table tennis has always been something ‘unusual’ on my CV and a colleague also says that her accordion playing has helped her get noticed too.

I think we need to start looking at ourselves and our CVs in exactly the same way a business would.

Start by working out your USPs (Unique Sales Position), and then look how to market yourself. Naturally if you’re looking to break into a very competitive marketplace by showing your potential future employers that you’ve taken up voluntary work, ran a marathon, organised events for the local cub group it will really help you shine.

It’s also great news for those studying degrees as employers will be taking note on what they were up to during rag and fresher’s week as well as whether they got a first or a second class degree.

Good post. I declare, I have a degree. Did I think it was useful - yes ish. Does it tell you much about me? Kind of. Would I have done English if I had to pay full tuition fees and get into big debt? I doubt it. I think we need a broad church of requirements for work and always have done. The drive for degrees for everything was a political move when I really feel a cross party approach to developing people for work was needed. Degrees, technical training, access into work schemes and more support at school for young people to make informed decisions about what they need to make themselves employable would get my vote over constant change in some parts of the education sector. We won't see degrees become obsolete for a while although I do hope we get a more balanced approach and realise you don't need them for every career path.

We won't see degrees become obsolete for a while although I do hope we get a more balanced approach and realise you don't need them for every career path.

I'm certain we won't see the end of degrees, and I would not wish to see that either. I completely agree, a more balanced approach would be the sensible and logical approach.

Now we live in a society where nearly everyone goes to Uni and has a degree, the "currency" has been devalued. In most cases degrees are about absorbing knowledge and not about skills or developing attitudes, so they never have been a predictive test of job suitability. The purpose of University is about having life experience and we appear to have forgotten that it has little to do with doing a job. I wonder what happens to adults when they forget what they were like when they were young.

Thanks (3)
Replying to Peter Cook:

The purpose of University is about having life experience and we appear to have forgotten that it has little to do with doing a job.

Life skills and experience, certainly valued by those within the team who had gone to University! It's an important aspect of Uni life, and an important one.

Great Article. This is so true.. most people just go to UNI to get the certificate. Most employees right now are practicing what they didn't learn in the UNI