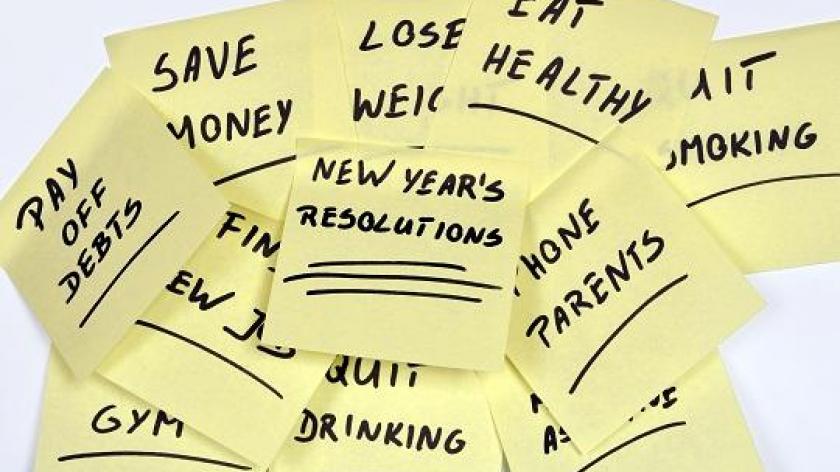 What does science say about making New Year resolutions stick?

One of the reasons it is hard to stick to your resolutions is that you are essentially stopping a habit. We often talk about habits. We say we’ve developed a bad habit. Or a good one. But what is a habit?

When you first decide to do something new, maybe something like challenging the CEO about his behaviour, setting up a new way of working with your team or taking steps to achieve a goal - you are taking an action.  It is intentional, rational and goal-directed.  Habits are characterised by automatic behaviour, you don’t have to think about doing it every time.  Our intuitive assumption is that actions become habits when we repeat them but is that correct from the perspective of how the brain works?  If it isn’t, just making a resolution to repeat the behaviour won’t work.

One metaphor which is used to describe a habit is of a neural pathway that has been made strong through repeated use. You could picture it as a footpath that has been used so often it has created a deep groove in the ground.  This groove makes it difficult to get off the pathway; to stop the habit. It appears likely that the synapses in the brain are stronger, or more likely to connect up. This metaphor makes intuitive sense.  But, it is wrong.  In terms of brain functioning, actions and habits are very different. They use different parts of the brain and they respond and work in different ways. Understanding how and why they are different can be helpful in changing your habits and adopting your resolutions this year.

Think about a habit you may have; it can be a good one, something that you believe helps you. Or a bad one, something you wish you didn’t do.  Like taking a biscuit in a meeting, for example. You see the plate of biscuits and automatically take one and eat it. You don’t consciously think about your action. Now, if you are hungry, this is fine. But what happens if you are not hungry? You see the biscuit, you still take it!  We all do this kind of thing. We go into automatic mode and this can prevent us from changing or interrupting a habit to achieve a goal. For example you go to work the same way every day. One day, you need to take a different route to buy something. However, when you get home you realise you have automatically taken the usual route and missed the shops. This is a feature of habitual behaviour. Actions are more goal directed - you consciously take steps to avoid the biscuits because you are not hungry.

The change to goal-directed action is difficult – remembering your resolution-to happens in different brain systems and recent research suggests requires more than repetition to stick. The action system is dynamic and responsive to changing circumstances. For example, you can change how you contribute at the management meeting when the agenda takes an unexpected turn or you can eat fruit instead of the biscuit. However, this also takes effort and can be tiring to maintain. The prefrontal cortex which is largely responsible for intentional actions gets fatigued and then the habit system wins out. Part of the brain’s makeup is to be energy efficient - this means it is pushing behaviours that are energy hungry, like actions, to more energy efficient parts of the brain, where habits reside. The habit system is slow to get in place but once there can be hard to change.

Habits are inflexible and do not change when the situation changes. Intentions and goals might change but habits will not unless you intervene. Habits are most useful when you need to trigger behaviour quickly, automatically and with little effort. So they keep you alive, they allow you to learn complex skills, do many parts your job and do all of these things whilst learning ever more habits. Neuroscientist Kevin Ochsner says as much as 70% of what we do is habit and that includes most of our job.

These two systems, action and habit, compete and when there is a conflict habit usually wins. This is why so few resolutions succeed.

It is important to distinguish between your intention to adopt a new habit or goal and your plan to do so. Often, we have very clear intentions but a rather vague plan. Charles Duhigg proposes a three-stage process for creating habits. The process involves creating a plan that contains a cue, routine and reward.

Cue: Habits are triggered by cues: triggers or signals that tell you to act in a certain way. To create a new habit, you need to also create a cue; something that tells you to take the next step. Working on the cue will help make a habit. For example, if you always try to do your preparation for the Monday management meeting on a Friday afternoon, but never get round to it, then don’t keep trying, and failing; instead, change the time you block out for it (the cue).

One tactic which has been shown to work is to create behaviour chains. This involves using current routines, instead of trying to fight them. The concept of if-then planning is built around cues that you can use to let you know that it’s time to act on the behaviour. Also known as implementation intentions, this tactic involves picking a part of your schedule and then building another linked behaviour which will form the new habit. For example, instead of “I will go to management meetings prepared to participate” your plan would be, “When the management meeting agenda is sent I will put aside two hours to prepare.” Studies have shown that this is a successful method to help form new habits.

Identifying a good cue can be hard but they tend to fall into the following categories:

Experiment with different cues until you find one, or more, that works for you.

Routine: Define the steps you will take; the actions that you are trying to form into the habit. It helps to write down your routine so you know the exact steps. For example, if the routine is to prepare for the management meeting, once you have the agenda what steps will you take to put time aside  prepare, how long will you take and what are the outcomes you will achieve?

Reward: This is important to embed the new behaviour into a habit. And this is probably why just repetition or determination doesn’t work.  Rewards need to have a couple of characteristics.  For example, if you are trying to get into the habit of going to the gym more often. Choose a cue, such as going to the gym as soon as you wake up. The reward might be a smoothie after your workout. Then think about that smoothie, or about the endorphin rush you’ll feel at the gym. Allow yourself to anticipate the reward. The anticipation is more important to the brain than the actual reward. Your goal is to get the brain to crave the reward.  Many studies have shown that a cue and a reward, on their own, aren’t enough for a new habit to last. Only when your brain starts expecting the reward—craving the endorphins or sense of accomplishment, will it become automatic. The cue, in addition to triggering a routine, must also trigger a craving for the reward to come.

You have probably managed to implement new habits for a month or two, only to have them fail when you are under pressure or stress. If you want to avoid lapses there is one more ingredient that is crucial; belief. “For a habit to stay changed, people must believe that change is possible.  And most often, that belief only emerges with the help of a group,” says Duhigg.  An example of this is social learning communities that help leaders adopt new behaviours. Groups create accountability and belief which are important in helping you stick with new habits. So if you want to change your contribution at the management meeting ask yourself who can support you to stay on track, give you encouragement and feedback? If you want to regularly go to the gym is there someone to go with you or maybe hire a personal trainer who you will feel compelled to report your progress too. The more positive reinforcement you can surround yourself with, the easier it will be.