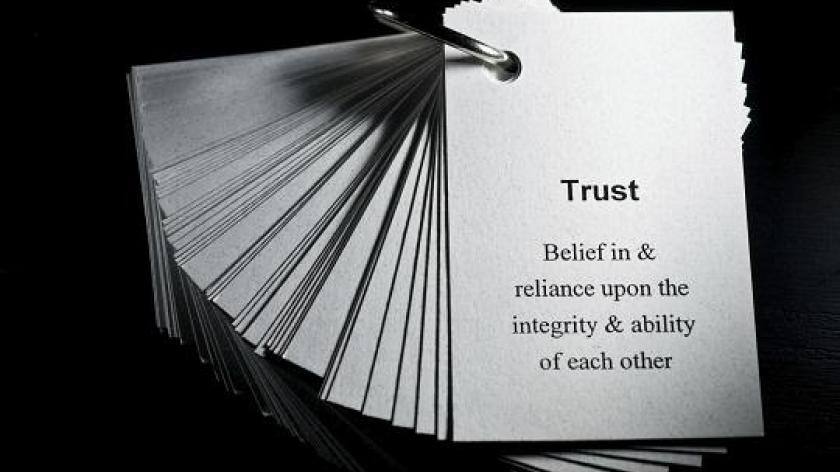 A while ago I was working with a leadership team who got into a debate about trust. The team was split with the senior leader insisting their role was to mitigate risks by putting in place policies and policing people to ensure the company was safe. His starting premise was people are not trustworthy, if they can they will cheat the company. Others in the team held a different view which can be summed up as ‘if you trust people they will respond honestly’. This debate got me thinking about the neuroscience of trust and how our starting point impacts the levels of trust we obtain in practice. Given trust is a core component of employee engagement, according to many studies, including the Edelman Trust Barometer, the levels of engagement possible in the company will be dependent on the level of trust. So what has neuroscience got to add to our understanding of trust and engagement? You can see a brief video on the neuroscience of engagement here.

HR is often the developers of policy and custodians of the cultural norms that promote or inhibit trust. Understanding how trust works at a biological level and the science about what creates trust is an important element in guiding policy and advising leaders. Here are some of the key components about trust through a neuro-scientific lens.

Much of the work on trust has been carried out by Paul J. Zak who is a neuro-economist at Claremont Graduate University in Southern California, you can see his TED video talking about his work here.  Zak has found that countries with high trust levels are also the most economically successful. There may be a hint here for business leaders and HR too! There is some direct evidence that levels of trust correlate to business success. Data from a study of organisations indicates that the relationships that link individual and organisational values to outcomes are explained primarily by the trust employees have in the company and colleagues.

Zak started out looking at morality and thought that oxytocin might be an element in morality. He focused on trust as a more tangible element to study. He and his colleagues carried out research to understand how the human brain determines when to trust someone and when not to trust someone. Participants took part in the Trust Game designed to study individuals' propensity to be trusting and to be trustworthy. In his experiment participants’ oxytocin levels were monitored throughout the study. The researchers found that when participants felt they were trusted, their brains responded by producing oxytocin. When participants were shown increased levels of trust their brain produced even more oxytocin. Most significant however, was the finding that the rise in oxytocin levels resulted in participant’s behaviour being more trustworthy. The researchers conclude that people who feel trusted become more trustworthy as a result of increased oxytocin levels in their brains! Zak calls oxytocin the trust molecule.

There are differences in brain activity depending on whether people trust conditionally or unconditionally. If people trust each other based on certain conditions being met, like delivering a project on time or keeping commitments, the brain’s reward centres the VTA ( vental tegmental area) activates. Unconditional trust activates the septal area.

Experimenters also found that changes in oxytocin related to levels of empathy and that the changes in oxytocin predicted people’s feelings of empathy. Zak believes it is empathy which makes us connect to others; connection to others triggers moral behaviour an element of which is to be trusted.  We want to help people, this makes us feel good about them and so we act well towards them. This is not new - Adam Smith said in 1759 in his book the Theory of Moral Sentiments that we are social beings and therefore share the emotions of others, if we do something to make someone happy we share those emotions too. Neuroscience has now shown that Smith was right.

But what about when people feel distrust? Zak and his team discovered that when male participants are distrusted it causes a rise in the levels of a hormone called dihydrotestosterone (DHT). Increased levels of DHT increase the desire for physical confrontation in stressful social circumstances. This suggests that men have an aggressive reaction to being distrusted.  And women? Women are what Zak’s calls “cooler responders” although this is not yet fully understood or verified.

But some very recent research has found a darker side to oxytocin, and one that leaders and HR need to be cognisant off. The research from North Western  University in the USA found that it can increase emotional pain. Oxytocin seems to be the reason stressful social situations, like having a bullying boss or extreme stress in a team, have an impact long after they occur and can trigger fear and anxiety long past the event. This is because the hormone strengthens the social memory in a specific region of the brain

If a social experience is stressful or negative it activates a part of the brain called the lateral septum, the pathway or route oxytocin uses to amplify fear and anxiety and that intensifies the memory and makes people susceptible to feeling fear in stressful situations in the future. Hopefully, oxytocin also intensifies positive social memories and, therefore, increases feelings of well-being, but that research has not been done yet.

We have written before about the role of threat and fear and its impact on brain functioning. High levels of trust are associated with decreased amygdala activity and low fear. When there is a breach of trust the brain’s conflict detector the ACC activates the amygdala. Trust and fear are inversely related; fear activates the amygdala and trust decreases activation. Trust therefore frees up the brain for other activities like creativity and planning and decision making.

The implications for engagement

If HR wants to increase trust in the workplace the best place to start is at home!  By being trustworthy and by trusting people more. There is evidence that this works at both a conscious and an unconscious level. At a conscious level; people want to honour your trust in them, at an unconscious level the research above suggests it also works on a deeper, neurological bases. This has the potential to create a snowball effect on trust. Showing people that you trust them rises the oxytocin levels in their brains and that makes them potentially more trustworthy. They then also show more trust in you and that in turn raises your oxytocin levels, causing you to be more trustworthy and to show more trust in them. One method recommended by Edelman for doing this is storytelling. You can learn more about the science of storytelling in our HRZone article and how to construct a powerful story in our HR tips. HR departments or professionals who show constant distrust can trigger the reverse snowball and thus negative responses. At best people will follow the norms. At worst they could respond aggressively and will definitely not be engaged!

And the leadership team I was working with? Well it is work in progress but education is a powerful thing!