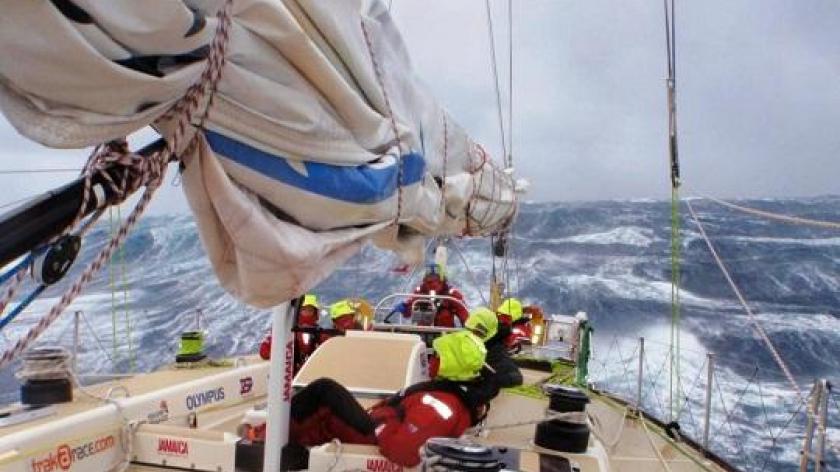 Leading under pressure - lessons from the High Seas

This piece was written by Trudi West, Researcher at Ashridge Business School, who was part of the team studying the Clipper Round The World race.

The challenge of leading is never more keenly felt than when working under pressure. Whether that pressure comes from the external environment or one that we create for ourselves, making the most of the resources available helps us meet those challenges and maintain the energy required to lead in today’s harsh conditions.

Based on research carried out with skippers and crew of the Clipper Round the World Yacht Race, this article discusses the challenges faced by those on board and provides food for thought about how to meet those challenges. The parallels to the more familiar world of work are salient as like many of our own teams, the people that took part in the year-long race did so for a variety of reasons which affected what they hoped to achieve.

As each boat was identical, potential gain came from the skipper and their crew. Some skippers were able to draw upon and develop their crew, making the best use of the limited resource available to them. By developing alignment, capability and autonomy, skippers had more energy to balance the broader needs of the crew together with the need to race.  They also spent less energy managing friction, which happened when there was uncertainty or distraction. This could be through lack of technical knowledge, ambiguity of purpose, doubt in ability or interpersonal tension.

The challenges faced on board each boat were surprisingly familiar to those faced in the office. Managing multiple expectations was the greatest challenge as the need to win was not shared by all members of the crew.  Some people were prepared to do whatever it took to be able to stand on the podium while others wanted to sail between ports on the trip of a lifetime; winning meant different things to different people.

The skippers that worked closely with their crew to develop common identity and common intent were able to influence and shape expectations as their crew members understood why; both in relation to their own reasons and the motivations of others. This was not telling people what the objectives were; this meant developing an identity and intent based on the individuals within the team, accommodating communication styles and preferences and integrating members as valuable assets.  Members were clear about what was expected of them because they created that expectation, taking intrinsic responsibility for the outcomes. Skippers that told members what to do had to keep telling them, and both got frustrated.

Understanding why they were doing what they were doing provided the grounding to understand how. Capability is described as the development of a broad range of skills and processes - how to lead, learn and live together as much as technical skills. Teams with high capability experienced more positive outcomes as they were able to respond in the moment while teams with low, or narrow capability experienced more friction.

This was as much about the development of the skippers’ capability as it was the crews’ capability as most had not worked in any situation like it before. Each crew member had paid to take part in the race and so, were stakeholders; the skippers had to develop their leadership skills to reflect this.  Formal authority, assigned and explicitly held, was only as good as the skipper’s personal authority, which was based on reputation, experience and character. Crew members gave their permission to be told what to do, and they gave it to skippers who had personal authority. Formal authority was useful when responding to ‘what’ in the early stages but ran short when people naturally wanted to know more about the ‘why’, as the race progressed. Personal authority remained consistent across the race.

Knowing when to step in and when to step back took practice and trust; crew with low autonomy had their actions controlled and were required to wait for direction. This was expected in the early stages of the race but when it went on for too long, it left the crew feeling mistrusted, frustrated and undervalued. A crew with high levels of autonomy had discretion to self-organise. This might be expected in high performing teams with high alignment and capability; however, without alignment and capability, too much autonomy left the team feeling out of control and unsupported.

The skippers started each race with a healthy distrust of their crew as they had to gauge what each member was capable of.  It was important for them to develop trust and capability in line with the common intent to be able to step back; this allowed them to focus on the more strategic aspects of the race. It also allowed them time to relax and the opportunity for better sleep, although not always easy when living at a 30 degree angle while slamming into waves.

By developing alignment, building capability and supporting autonomy, skippers were able to make the best use of the resources available to them. They captured the energy that individuals brought to the boat and worked with that energy to create an environment where crew members felt rewarded and integral to the system. Energy was lost when there was friction which slowed the boats down – both metaphorically and literally.

The research demonstrates that when all things are equal, beyond the controllable technical skill and uncontrollable external environment, it is people that make the difference. The crews that came together with a shared understanding of purpose and responsibility were able to work better together.