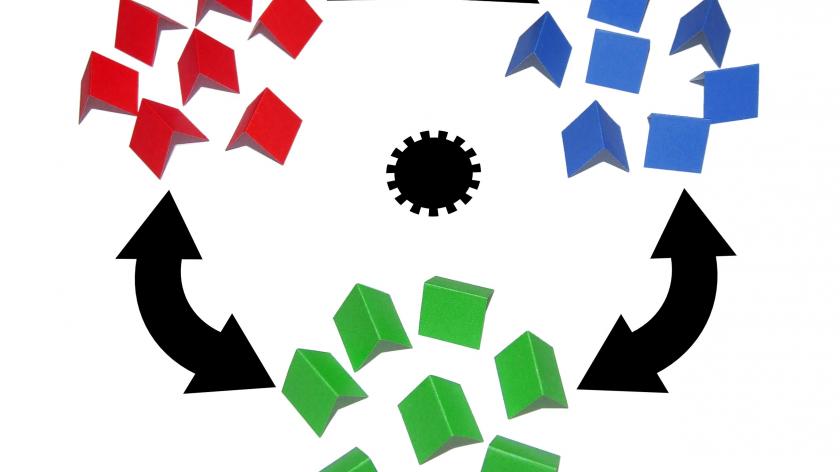 Working through the floods - employee engagement in action

Newbalance is the only sportswear brand still manufacturing trainers in the UK. When the floods hit in Cumbria the highly engaged workforce pulled together to keep the factory open and support the local area, as their HR Director, Paul Kennedy explains.

Manufacturing in the United Kingdom is a tough business and the challenge to remain competitive in a global economy has never been so great. For one UK manufacturer the events of 19 and 20 November in Cumbria presented unprecedented challenges.

Newbalance have been manufacturing shoes for over 26 years in Flimby in the coastal region of Cumbria. Employing up to 250 people at any one time, it is one of the county’s largest employers.

The day started as any other day would. Early in the morning at 7am everyone turned up for work as normal. The factory had recently adopted a four day shift pattern to work a full week in four days with a three day weekend. The move was popular and has been part of ongoing engagement and improvement activity over the last three years which has seen production increased to more than a million pairs of shoes a year and growing fast.

As the day progressed, so the rain fell heavier and weather warnings started to be broadcast around the region. A number of phone calls were received towards the latter part of the shift from worried family members and the situation outside was detiorating fast with long traffic jams and torrential rain.

The factory closed a little earlier than normal. The factory manager Andy Okolowicz received a call from his worried wife who worked in a shop on the mian street in Cockermouth. She could see excessive amounts of water flowing down the road and Andy rushed home to help.

He arrived just as the water level was getting above the doorframe and he frantically piled sandbags and wooden boards on the front of the shop. Wading into what was now knee deep water he was surprised to see a small speedboat come down the high street and a man call out asking if he needed help and telling him to get out of the water, which was getting faster and deeper by the minute.

Andy and his wife escaped through the back of the shop and got back to their home having done all they could so save the shop and its stock. Their home was on high ground so relatively safe.

The events of the next few hours though would change the lives of thousands of people. Drama was unfolding in Cockermouth and TV pictures showed people being rescued from rooftops and pulled out of houses. A few miles away the coastal town of Workington was also hit hard.

Excessive flooding and torrential rain brought havoc and destruction to all in its way. Sadly a brave police officer lost his life performing the duties he had trained to do for many years when one of the local bridges collapsed.

It continued throughout the next couple of days with sights of wrecked belongings and houses on TV stations and newspapers everywhere. The town of Flimby is the third point of a triangle where Cockermouth and Workington are the other two and in the space of 24 hours the unimaginable happened: transport links by road with Flimby from Workington and Cockermouth were effectively reduced to one way in and one way out.

It became apparent that if nothing was done, effectively half the factory workforce would face the potential of a two hour, one-way trip to work on Monday morning. Quick thinking by Andy and the local leadership team over the weekend helped ease the pressure enormously. The local radio station was contacted to broadcast updates for Newbalance employees about what trains were available to get from Workington to Flimby. More importantly, Flimby station is a 15 minute country walk to the factory, so Andy and the team laid on a coach to pick up and drop off at both beginning and end of shifts.

The broadcast was relayed all over the region and other employers followed suit. Not content with those efforts Andy spent Saturday scouring the temporary shelters so see what help he could give and how Newbalance could provide footwear and clothing  for people who had nothing but the clothes they stood in.

As Monday morning approached apprehension filled the air. A lost day’s production costs a lot of money and severely hampers the factory in its efforts to be competitive. The team at Newbalance, however, were not about to be beaten.

Despite the terrible circumstances and tragic situation on the Workington bridge with many friends and families being affected, the community worked togethe. Word had got around about the arrangements in place for the employees and on the Monday morning every single employee who should have been in work arrived to get the coach on time and turned up ready for work. Newbalance stated that train fares would be reimbursed to individuals for the first week of disruption.

In a testament that shone loud and clear the team indicated through their actions they would not give up. The pride and passion they take in their work and the improvements they had made were not going to be thrown away. On the first day back, production levels actually improved.

Indeed that’s been the case ever since, not a day missed with sickness, 100% attendance and a totally committed workforce still producing high quality shoes. Employees are likely to have to continue to take the train and coach to work for a considerable period of time as bridge repairs are likely to take some time.

Seven days after the terrible events, Newbalance announced a donation of £25,000 to the flood fund. The senior management group of Newbalance Europe have personally pledged £5,000 to the fund. On hearing the news every single employee in the factory stated they did not want to be reimbursed for train fares but rather preferred the money to go into the flood fund directly and now the Newbalance employees are planning fundraising events to support the fund.

The team had shown, and continue to show what’s great about Britain... the British worker.

Paul Kennedy is proud to be HR Director at technical sportwear and specialist running brand Newbalance.