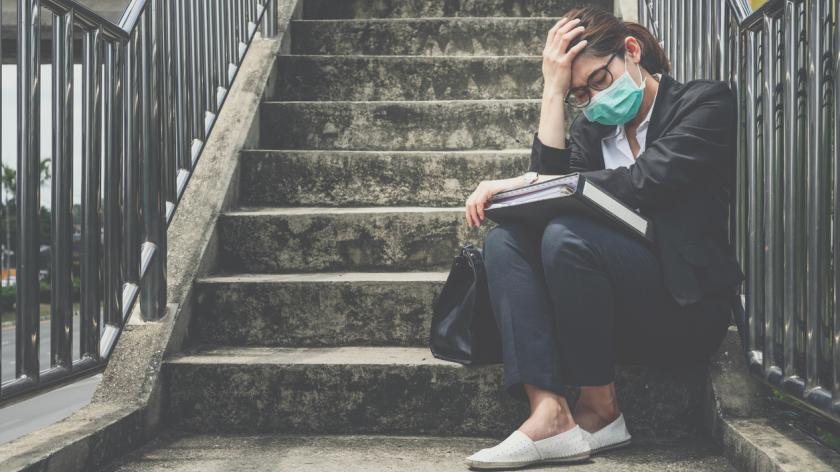 Why Covid-19 is a threat to women's wellbeing at work

Women have been disproportionally affected during the pandemic as they tend to work in sectors most vulnerable to job insecurity. The impact is not just financial, the emotional toll on women is unprecedented, so it's time for employers to step up and offer better support.

At the start of the pandemic, the IFS predicted there would be specific groups of people that are more vulnerable because of a coronavirus related recession.

They thought that even if the pandemic hit all individuals equally, that the economic repercussions of the crisis would fall disproportionately on women – especially working mothers.

At the start of this year UN Secretary-General Antonio Guterres said that the virus, “could reverse the limited progress that has been made on gender equality and women’s rights”.

While the general split of those who have been diagnosed with Coronavirus doesn’t show a gender bias, the impact the pandemic is having on our lives does.

In the UK, women account for the majority of healthcare, retail and hospitality staff. An estimated 740 million women are employed in the informal economy. These are the industry’s most negatively affected by the pandemic.

In the UK, more than 78% of those who have lost their jobs since the crisis began are women

Data tells us that women have suffered more job losses than men and have had more childcare responsibilities during the pandemic too. In the US, women are still doing 76% of the family care work – three times that of men.

In the UK, more than 78% of those who have lost their jobs since the crisis began are women and two thirds are aged between 18 and 34. While some of the women may not be working for you, they will be living with your employees as partners or spouses.

They will also be the women who will be applying for jobs with your company, meaning they will begin work with a greater need for support around emotional or financial wellbeing.

Over the last 10 months, we have discovered that women, and women with children are most likely to experience psychological distress. The mental health impact of the pandemic has a greater impact on women than it does on men.

Even though there has been an across the board increase in poor mental health, an in increase in stress and anxiety has been seen more frequently in women than it has in men.

The mental health impact of the pandemic has a greater impact on women than it does on men.

In August this year Aviva found that almost 60% of women reported higher levels of stress because of lockdown – almost 20% higher than men.

How can employers help?

Employers should try to focus on the most vulnerable employees. Young women are already in the highest risk group in the UK for mental health and their emotional wellbeing has worsened during the crisis.

Having a better understanding of the unique challenges women are facing at the moment will help employers to deliver a more gender specific wellbeing strategy.

A cost-effective way to support women in the workplace is to build dedicated emotional wellbeing hubs.

According to the World Health Organisation, depression, anxiety, psychological distress affect women to a greater extent than men across different countries. Being a woman is a significant predictor of being prescribed mood-altering drugs.

The harsh reality is that despite many organisations making commitments to improve and support emotional wellbeing due to the pandemic, more than half say they haven’t been doing any more than before the pandemic. Most citing lack of budget for not doing more.

A cost-effective way to support women in the workplace is to build dedicated emotional wellbeing hubs. With only a third of managers sufficiently confident to tell employees where wellbeing support is within an organisation, and 80% of employees saying they don’t know where their company wellbeing initiatives are, simply creating a destination can help to better support women without the cost.

When they know where to go and what support is available, around half of employees say it would make them more likely to disclose a mental health issue at work.

Unlike previous recessions, the one triggered by the pandemic has resulted in much larger job losses for women, than for men.

But the impact may be more far reaching. We already know there is a pensions gap between men and women and as women are the employees most likely to be out of work or have to cut hours because of the pandemic, this gap will only widen.

In fact, Aegon have found that a greater portion of women than men say they will decrease their pension contributions over the next six months.

It has been really tempting for employees to reduce pension contributions or withdraw money from retirement savings. But women who do this may be faced with significant long-term financial impacts because they need to address short term challenges.

Last year the Young Women’s Trust reported that almost half of young women found it hard to make their pay last until the end of the month. Women still typically earn less than their male counterparts ,which research says plays a big part in women’s financial security.

I’ve written a lot about the hugely positive impact financial education and improving financial literacy can have on employees. But it might be that the impact is even bigger when these services are provided to female employees.

An new report called ‘Advancing Women’s Digital Financial Inclusion’ prepared for the G20 by the World Bank found a number of ways we could advance women’s digital financial inclusion.

One of the primary recommendations was that more should be done to promote financial capability in women. The OECD agree that there is a greater need for women to access financial education.

Employers should think about how they can help their female employees to improve their knowledge of financial matters, products and skills.

There is a greater need for women to access financial education.

Previous research has found that consumers participating in debt management programmes were more likely to meet their monthly payments when they received short, regular messages or education to prompt them.

It can be quite easy for employers to devise a set of regular, automated communications or notifications aimed at helping employees to take small actions to better understand their finances or take action – an approach recommended by the Brookings Institute in the US and the FCA in the UK.

Diversity can be hugely affected by reward, benefit and wellbeing strategies, but it can also help to support it. Employers are increasingly struggling to offer schemes that are personalised to employees when so many of our people have diverse and fast-changing needs.

But by acknowledging the ways in which the pandemic is negatively affecting certain groups of employees, we can start to narrow down how we build our wellbeing or employee benefit strategies.

The latest research reveals that employees are still struggling with opening up to their employer about their wellbeing concerns. More than 80% of employees report that the negative stigma surrounding mental health stops them seeking support.

A new report out this month shows that employees aged 30-40 are struggling the most with financial wellbeing at the moment and many of those are women.

More than 80% of employees report that the negative stigma surrounding mental health stops them seeking support.

But of those surveyed four in 10 said they are too embarrassed to talk to anyone about their money worries. This is preventing them for asking their employer for help.

Research has found that it is very important that people are able to access the right wellbeing support at the right time. Strengthening the links between employee benefits and wellbeing can help to surface the additional support services offered by benefits like income protection and private medical, as well as reminding employees who their mental health first aiders are and where they can access their employee assistance programmes.

When these tools and benefits are combined with the free Government support available and content aimed at improving gender specific health and financial literacy, we may start to better support our women.