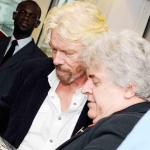 All the small things – Getting your PR right in HR

HR often finds itself at the interface between the business and the outside world.  As such it is responsible for the external image that the business portrays.  I want to share a story that happened last week, which has important lessons for all those who have to deal with the media as part of their HR role.

I had sent a press release out for an HR Leadership event coming up on June 19 at The Hilton Hotel in partnership with The Open University.  The press release included a sentence which said:

The story got picked up by The Independent newspaper last Thursday.  The journalist rewrote the line to read as follows:

Cook will be joined by Bernie Tormé, former lead guitarist for Ozzy Osbourne, and Ian Gillan, the Deep Purple singer.

It’s still perfectly accurate, but do you see what has happened here?

The BBC’s editorial team picked up on the story but missed the all-important comma.  By Friday morning, BBC Radio 4’s Today Programme ran a story that more or less suggested I was responsible for reforming Black Sabbath and Deep Purple – An awe inspiring thought but sadly untrue!  By Saturday evening, The Sunday Express and New Musical Express had copied the mistake and amplified our event into a ‘tour’ through the strategic addition of the letter ‘s’ to the word seminar ! :-( Despite copious efforts to correct the story online, the mistake was repeated on BBC 6 Music's Radcliffe and Maconie show on Monday.  At the time of writing, the story has reached USA Today, The Times of India, Gibson Guitars and possibly The Sun.  Graphic evidence of what has been said recently in the Leveson Enquiry that:

“Checking your facts = I read it in another paper”

You might say that all publicity is good publicity?  In this case, I had to spend considerable time and energy correcting online media and apologising to Ian Gillan’s management.  Rock’n’Roll HR can be cruel and I’m pleased to say that I still have all my body parts after this process!  I also had to spend quite a bit of time dealing with old rockers and rock chicks, who wrote e-mails to confer God-like status on me, for forging a reunion between Ian Gillan and Bernie Tormé.   Having  pulled this trick off, some of them even expect me to resurrect Jimi Hendrix, Janis Joplin, Kurt Cobain and Amy Winehouse!

The moral of the story may be summarised in another newspaper headline:

What then are the lessons for HR people who deal with PR and external affairs?

Eventually, we got the PR right - see this post at The HR Zone

Peter Cook leads Human Dynamics and The Academy of Rock, a creativity and innovation consultancy with an enviable network of associates around the world. We facilitate strategy, creativity, innovation and change through bespoke consultancy, masterclasses, keynotes, training, coaching and mentoring. Author and contributor to 11 books, acclaimed...

Hi Peter - as you know I've ben following this story here and on Facebook too. Kudos to you - I love the way it's taken off. And whilst I hear you about the image stuff, I can't help but feel that these errors have boosted your audience and interest in your fab idea even further. So what would you have preferred, a perfectly typed and recopied/quoted interview that generated some interest, or the series of interesting oversights which have given you such fabulous exposure? The next time you fancy creating a 'PR disaster' like this, let me know and if it really is too much trouble, I'll take it off your hands :)

To quote Lord Sugar, or Lord Lucan, or Lord of the flies:

p.s. Must get this tea and / or beer thing sorted soon in London

On reflection re your point on errors Doug, maybe you have something there.  I now have BBC Radio 4's You and Yours programme, The Independent newspaper, Bloomberg TV and BBC South East News TV attending on Tuesday.  I have had to put them all straight on the myth that Ozzy Osbourne is attending though.  Expectation management is key to successful execution and they all want to believe that the Prince of Darkness is attending.

That said, I did get a call from Bruce Dickinson's agent (Iron Maiden), asking if I wanted him to attend.  I said no.

One of the attendees is working on getting Brian May to attend - I doubt he will succeed after his recent cameo appearance in the Royal box at the Jubilee, but that would be nice ...

So, since we have never met apart from Twitter, let's do so after your unconference.  I hear fantastic things about your work so let's hook up next time we are in London.

Good luck tonight Peter - and yes, let me get Stop Doing Dumb Things delivered then I think we've earned a beer and a good conversation. Catch up soon - D

Twas rather good since you asked.  We burned a guitar as part of the event which I've attached as a link.

Reunions - not sure about that.  Many rock groups are dysfunctional teams.